The Faziolo F228 piano has been used by the one and only Freddie Mercury and played on hits by Adele. It has a distinctive sound that Waves Audio have accurately modeled with their new plugin instrument, Grand Rhapsody Piano.

Here's what you need to know about it:

Sampled from the Fazioli F228 grand piano housed at London’s Metropolis Studios – the very piano played on Grammy-winning hits such as Adele’s “Hello.”

Like a sleek Italian sports car, the Fazioli F228 model was engineered from the finest Italian parts and craftsmanship, taking its wood from the same red spruce forest where Antonio Stradivari cultivated his rare and celebrated violins. The deep bass, rich resonance and crystal clear tonal qualities produced by the wood have made the Fazioli a highly coveted instrument for the most discerning ears in music.

Recorded at Metropolis with 8 different pairs of state-of-the-art microphones and the highest-quality preamps and converters, Waves’ Grand Rhapsody virtual piano delivers the same majestic sound as the studios' original Fazioli piano, with added features that only a plugin can provide.

From pop/rock songwriting to electronic production to intimate jazz and classical piano, Grand Rhapsody offers a wide range of tonality for musicians and producers. You can blend up to 3 mic pairs of your choice and choose their position; control how much of the pedal, key up and sympathetic resonance you mix into the overall sound; and apply Waves’ award-winning effects including EQ, compressor, limiter, delay, and reverb based on Waves’ state-of-the-art H-Reverb. 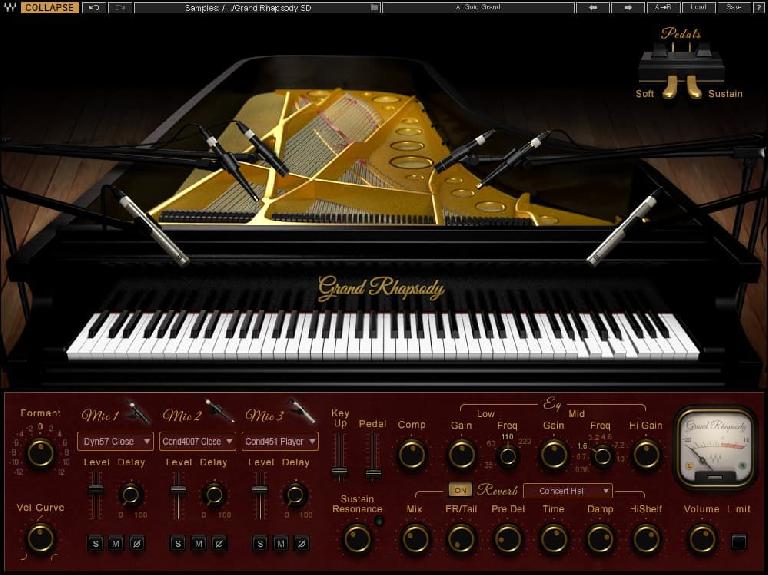 Whether you prefer to load one of the expertly programmed presets or create your own sounds from scratch, Grand Rhapsody furnishes you with all the warmth and richness you’d expect from one of the most luxurious pianos in the world – plus a little extra, from Waves.

Features At A Glance