There’s a new version of FCP X — not yet officially named 10.4 — and it’s not ready for release. But in a break with tradition, Apple today showed this not-yet-final version of FCP X to attendees of the FCP X Creative Summit, and let us take photos and videos. I don’t have a copy of the software myself, but I’ve seen the demo, played with it in person, and I can tell you all about what’s going to be released later this year. 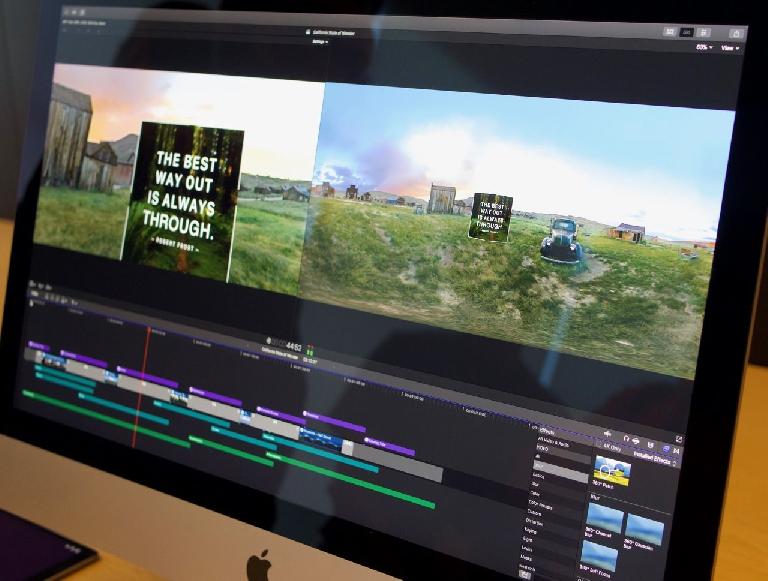 The highest profile feature of this new release is full support for working with 360° video, including VR headset support with the HTC Vive. Working with equirectangular 2:1 footage in the main viewer, you can choose to see a “normal” view in a headset. This means a director or producer could see what an end-viewer will see, while an editor sees everything as usual. If you don’t have a headset, you can pan around a flat version in a second on-screen window instead. This is also a valuable feature for delivery of 360° material to a more traditional output space — simply choose where you want the viewpoint to be.

Horizon problems related to an off-angle camera are easy to fix — just push the content around by hand and it’s automatically corrected. The controls on show are slick, and work just like the rest of FCP X. Nothing feels bolted on — the VR view works like the existing multicam view — and it won’t be hard to learn fi you want to dip your toes into VR production. 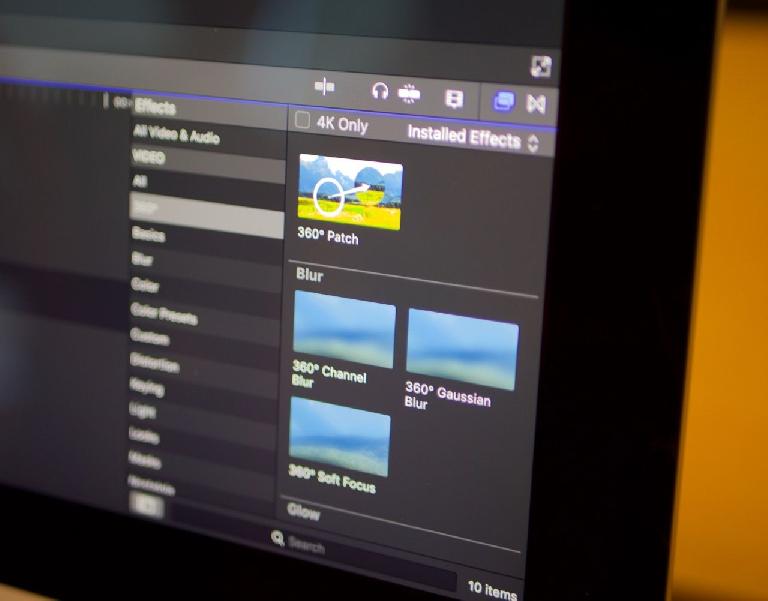 A selection of 360°-capable titles and effects are welcome

Motion has been updates to support 360° workflows too, and a selection of titles and effects optimized for 360° are included. A very useful cloning effect called 360° Patch will let video creators cover up any evidence of their tripods at the base of their videos — or of course you could put a logo there if you prefer. 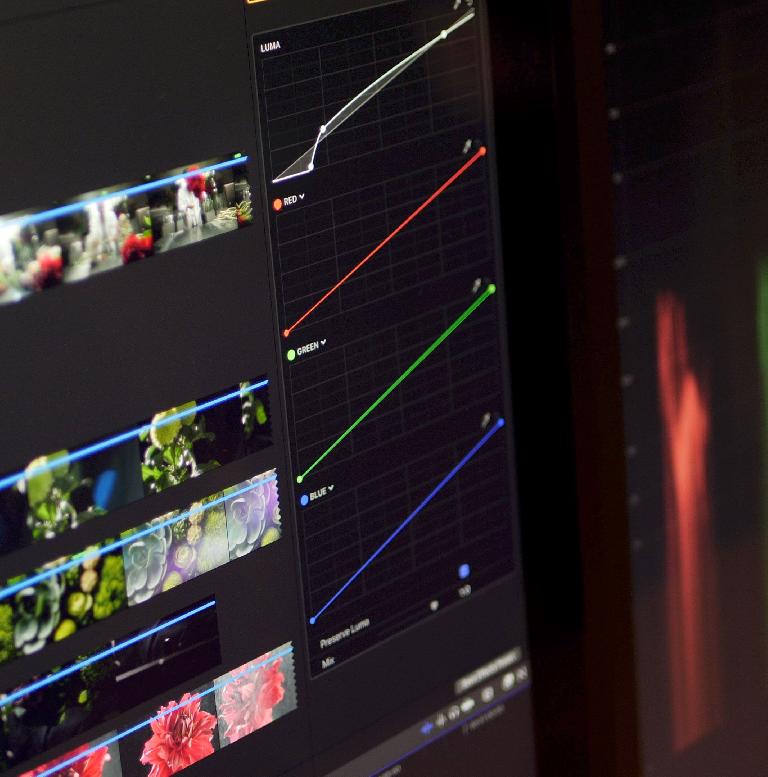 Yes, yes, yes, it’s finally curves — and a great set of curves too

Curves! I’ve been asking for years, and though third party plug-ins Color Finale and Chromatic have both filled the gap, it’s fantastic to see professional curves controls that really stretch what’s possible. You can use not only Luma / Red / Green / Blue curves, but there’s a full range of HSL Curves, including the professionally-oriented Hue vs Sat, Sat vs Sat and curves that affect just one small range of colors (e.g. oranges) at once.

Color wheels are making a triumphant return, and they’re very elegant indeed. As you drag the central control on each wheel, you can see what you’re dragging towards, and each wheel (global, shadows, midtones and highlights, as usual) incorporates a saturation and a lightness control on the sides.  As well as the new wheels, the individual RGB, Saturation and Brightness components of each can be broken out separately, and overall Temperature, Tint, Hue and more can also be adjusted.

Everything can also be keyframed, which is a huge improvement over the old “blade and fade” workaround. Custom LUTs can now be loaded, before or after other effects, and… there’s the long-awaited, long requested white balance eyedropper. Shoot a white/grey card, eyedropper that, then copy, and paste the adjustment across all other shots from the same environment to correct them all at once. 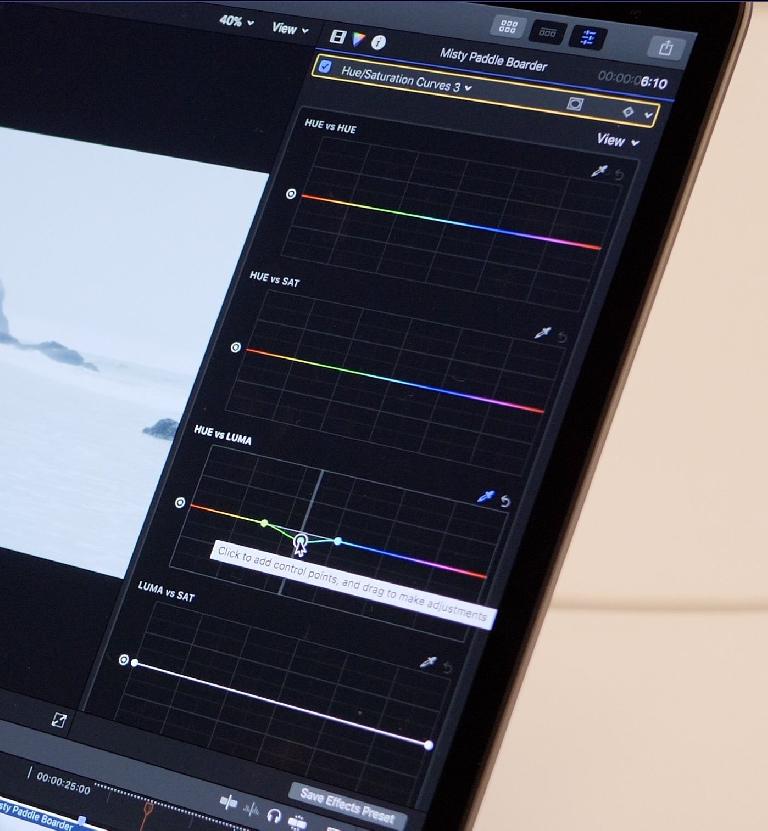 Hue vs Sat, Hue vs Luma, Luma vs, Sat, and more

Except for tracking (which Chromatic and Resolve both offer) it’s a hugely comprehensive offering, and a great improvement over just the color board alone. It’s going to make a lot of editors very happy, and should be a massive reason to master in FCP X rather than sending to anything else. If you’re pushing the limits of what you can do, there’s also…

Scopes in a “normal” Rec. 709 video go up to 100 IRE, but if you work in HDR, you can use scopes that go much, much higher. While producing for Dolby Vision requires specific support from a dedicated suite, the technology is now there for HDR grading within FCP X — if you have an HDR TV for monitoring. While the wide color gamut support in the new iMacs is important (better color range) you’ll need a fancy new display if you want to embrace HDR (better brightness range) as well. HLG and V-Log are supported as input (and effects are included to switch between color spaces) but the word is that V-Log is a better way to increase your dynamic range. While all that is welcome news for GH5 owners, what’s even more important is…

The brand new HEVC (H.265) codec is supported in FCP X in High Sierra. This means that the new “open gate” 5K x 3.7K video (a little like shooting handheld IMAX) should work fine, so long as you’ve updated to High Sierra. Though I haven’t been able to test this in person, I’ve been told by Apple staff that it will work, and as it works in the current release of iMovie on High Sierra, I don’t expect any issues. 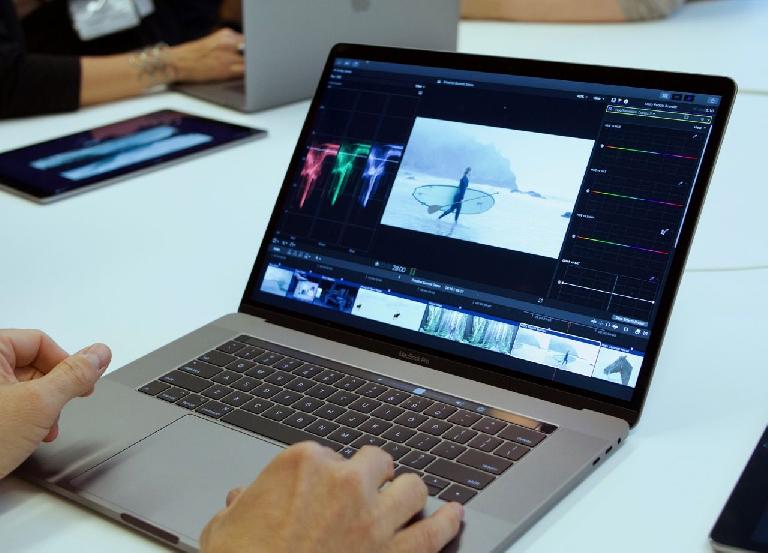 That iPad in the background transferred its edits straight into FCP X.

New keyboard shortcuts allow you to move to the next clip in a specific role on the timeline, which is a great way to quickly fix all your titles, or all your regular clips, or all your dialogue. Looping status is now shown with an icon next to the timecode, and the color science improvements in new RED and Canon cinema cameras are supported too.

Finally, if you’re coming from iMovie on iOS, you no longer have to round trip through iMovie on the Mac — you can move projects directly to FCP X. 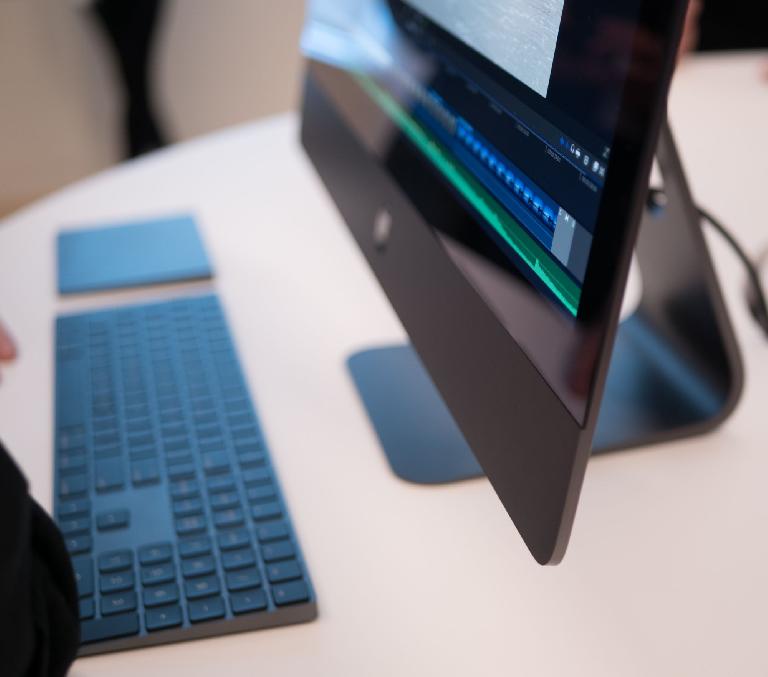 And one more thing…

They showed us the iMac Pro, both in action and in person. It’s dark grey. Its peripherals are also dark grey. And it’s very fast. Live REDCODE decoding with titles and effects at 4K, plus optimized at higher resolutions were demoed, and no frames were skipped. It’s a monster if you want to push it. 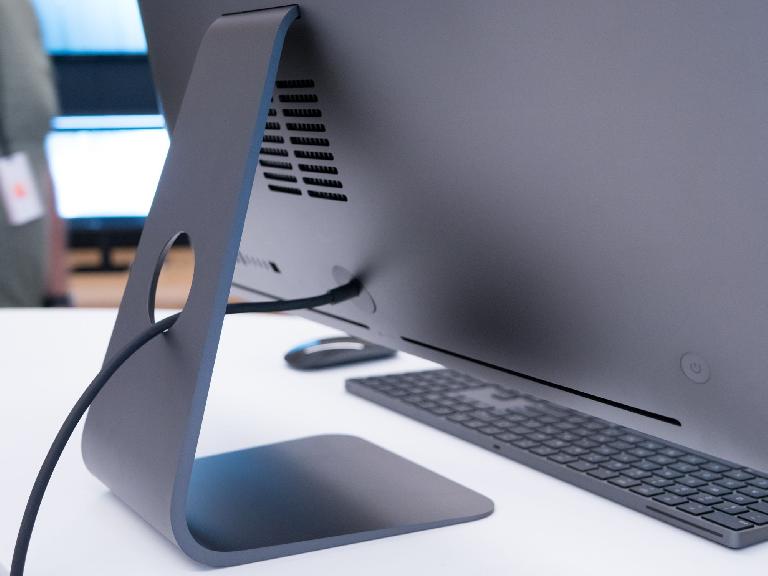 The iMac Pro was announced a little while back, but this is one of the few occasions where it was actually possible to touch it. It still looks the same as it did before, so if you were hoping to install your own RAM, that still doesn’t look like it’s going to be possible. Still, if you’re pushing the limits, this is the all-in-one Mac for you. 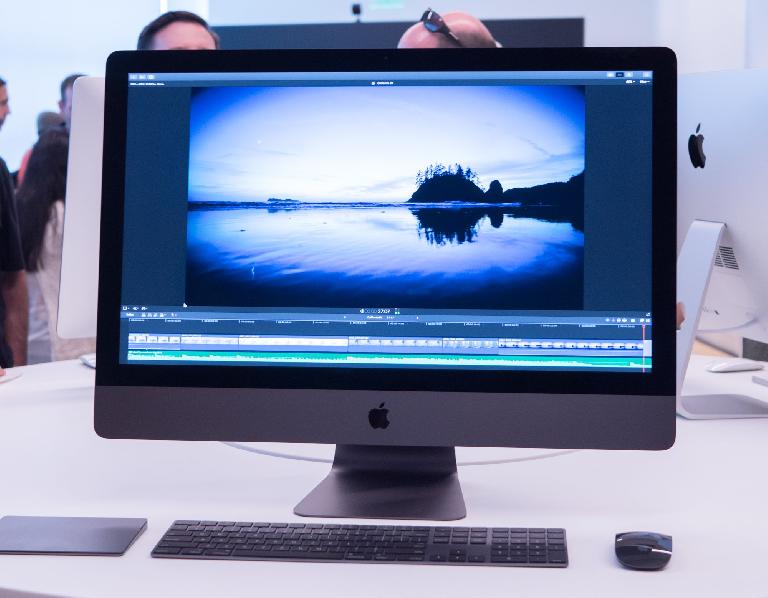 While it’s frustrating that the software isn’t ready just yet, it’s great to see Apple sharing far more readily than they have in the past. The new FCP X looks to have solid upgrades in color, in 360° workflow, and in the important tech underlying 4K HDR delivery. As soon as it’s available in the next month or two, jump on it!

Stay tuned to macProVideo and Ask.Video for more info on the upcoming version of Final Cut Pro X 10.4 which will be released before the end of 2017.

Dream It. Do It.
Do you want to learn Multicam Techniques?
Yes, I want to learn!
No Thanks, I just want to read the article.
Feedback
How are we doing?
We'd love your thoughts, feedback and questions regarding our new site. All feedback is appreciated!
We do not respond to this form! If you need support, please visit our support page.
Thank you for your input!
Your message has been successfully sent
Course Advisor
Don't Know Where To Start?
Ask A Course Advisor