All Articles Other
Blackmagic Cinema Camera: Film vs Video vs RAW
Iain Anderson on Wed, January 22nd 0 comments
Language
There's a multitude of formats to choose from before you even start shooting video with your camera. So, which is best for your needs? RAW? ProRes/DNxHD? Iain Anderson breaks it down for us.

There are many ways to shoot with a Blackmagic Cinema Camera, but which is the right way for you? Well, it depends on a number of things, including your computer, your storage needs, your workflow, your familiarity with Resolve and other post-production tools. In this article, we'll look at the implications of your choices, to help you decide which way to go.

First off, you need to decide if you'll shoot in a (lightly) compressed format at 1920x1080 and 10-bit color, or a truly uncompressed RAW format at 2400x1350 and 12-bit color. This is really the most important choice, and a number of factors come into play. Your compressed choices are really quite excellent: Avid's DNxHD for Avid (PC or Mac), or ProRes HQ for FCP (X or 7). Premiere on a Mac can also use ProRes if a copy of FCP is present. These are some of the higher-end format variants, often suitable for mastering, ideal for quick playback, and very unlikely to show compression artifacts. The data rate is high, around 200Mbps, varying slightly depending on the frame rate chosen.

However, that's nothing compared to RAW. Shooting this way, you'll be left with a WAV file for audio and a folder full of Cinema DNG stills. Completely uncompressed, they're 5 MB apiece. Doing the maths for 25 FPS, that's 120 MB/sec, or 1 Gbps. That's the reason you need a drive that's on Blackmagic's approved list of fast, reliable SSDs. 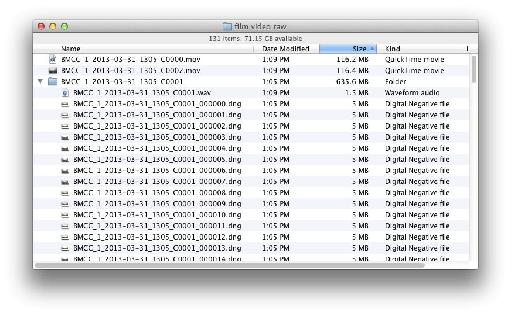 The comparative file sizes of DNxHD, ProRes and RAW for just over 5 seconds of footage

Pros and cons are fairly obvious here. If you shoot RAW, you'll have higher resolution, giving you more freedom to reframe in post and the ability to scale up to a slightly better looking 4K image. Of course, you're using the sensor's raw data this way, potentially seeing some subtle problems such as color errors on thin lines. Using the in-camera-downsampled full HD image can potentially mask these somewhat, giving a slightly softer but still detailed image. RAW images can be sharpened as part of the conversion process, so it's somewhat unfair to compare sharpness between the two, but there's certainly more detail to be had. 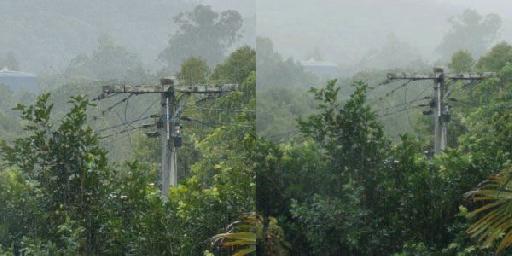 The biggest problem is with storage, though. Less than half an hour of RAW footage takes 240 GB, so you'll be facing instantly higher requirements in terms of storage size (to hold the data) and storage speed (to copy the data quickly). You'll also need to use Resolve (or some other RAW-capable app) to convert the footage into something your NLE can understand and to correct the color. FCP X doesn't deal with RAW natively, and Premiere's plug-in has been discontinued; you'll likely need Resolve to pre-process your files.

Shooting ProRes or DNxHD means you just copy the files and you're done. Instant appeal, and much easier archiving. Still, the files are around four times the size of DSLR media, so you'll fill up your hard drive much more quickly. If you were in the habit of optimizing your media, though, ProRes HQ is about the same size as DLSR media plus the optimized ProRes (standard) files, so it's hardly worlds away.

For me, it's ProRes all the way except for the most demanding shots (such as green screen). The 12-bit vs 10-bit color difference could be important in a cinema workflow, but either is vastly superior to the 8-bit footage you're probably used to. HD with 10-bit is probably 'good enough', though everyone's requirements are different.

If you shoot compressed, you'll get to choose Film or Video mode for Recording and for Display. Film is a 'Log' mode, where more stops of dynamic range is compressed into the available image space '" undersaturated and lacking contrast. This gives you the ability to recover highlights, shadows or both, but also requires extra attention in the grade '" as Raw does. Without correction, this footage looks flat and lifeless, but it certainly pops after a quick grade '" or an application of the Effect we talked about here. Video approximates the 'Rec 709' color space, more like a standard video camera but still probably a little undersaturated. 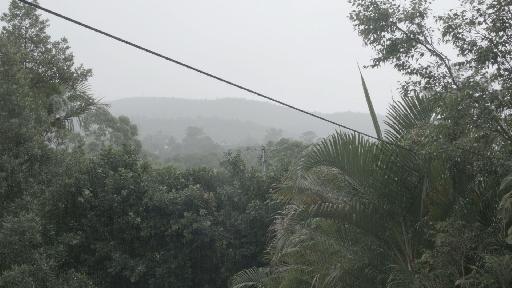 Since you will lose some dynamic range in the Video mode, I'd almost always set Recording Settings to Film mode. However, it's easiest to look at a Video-style image, which you can do by setting the Display Settings to Video. However, if you're using an external monitor through the SDI port, you'll have to live with seeing what you're recording. Some monitors use a LUT to compensate for the Film color space, but not all. Make sure your clients are expecting a flat image, find a monitor that can show something else, or show them a quick grade immediately after the shoot instead. 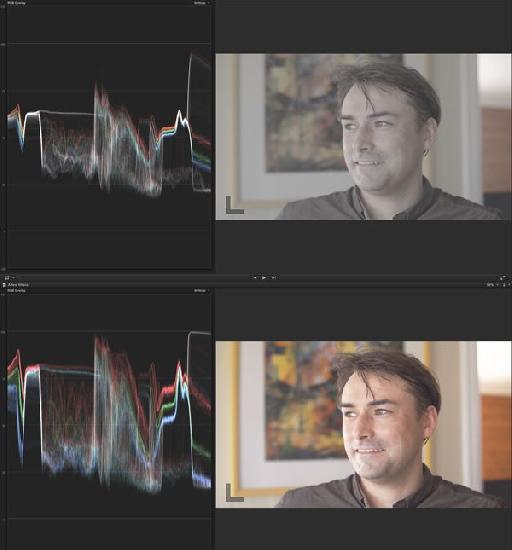 An ungraded shot and its waveform, before and after applying a LUT

So, you have choices. RAW for ultimate flexibility and increased post requirements, or ProRes/DNxHD for easy post with slightly reduced flexibility. Test them out in your workflow, then get out and shoot!

Dream It. Do It.
Do you want to learn DSLR Video Techniques?
Yes, I want to learn!
No Thanks, I just want to read the article.
Feedback
How are we doing?
We'd love your thoughts, feedback and questions regarding our new site. All feedback is appreciated!
We do not respond to this form! If you need support, please visit our support page.
Thank you for your input!
Your message has been successfully sent
Course Advisor
Don't Know Where To Start?
Ask A Course Advisor