All Articles Final Cut
FCP X: How to make a 360Â° Photo Trail
Iain Anderson on Sun, May 20th 0 comments
Shooting and assembling a 360 degree photo trail and then building a website around it is no mean feat. But Iain Anderson was up for the challenge and here he shows you how he did it.

This is going to seem a little odd, but stay with me. I recently had the opportunity to travel way out west, to the town of Blackall in Queensland, Australia, to work on some interactive multimedia art projects for the upcoming 150-year celebration of the town, B150. One idea was thrown around and quickly approved: let’s do something fun with 360° images. As a novel way to let someone be immersed in a location, they’re great — but how can we make it fun, engaging, and get people moving around the town?

Rather than creating a fully connected VR tour, we decided to create a series of standalone panoramas, encouraging visitors to actually walk through the town to reach each stop on the trail. Each stop will have a QR code on a sticker on a wall, window or sign. That sticker is scanned to get access to information about where they are, and a link to the 360° image that tells them where to go next.

As this project is to be used by people of all ages, with all kinds of mobile devices, with potentially tiny mobile data limits, we had to aim small and simple. Marzipano is a free online solution that lets you download the completed web-ready files for upload to your own server — and it hits a good balance between quality and downloaded file size. It’s not perfect for building a full tour, but for single images it’s just fine.

An aside: there are many 360° panorama tools out there, but most of the offline tools are expensive, clunky or both, and I’m wary of subscription-based online services due to the potential for future failure.

The first step was figuring out where we’d be hosting the site, and popping it on a local non-profit’s website was ideal. After figuring out the URL pattern, I used Adobe InDesign to generate the QR codes for the 16 stops on the trail. 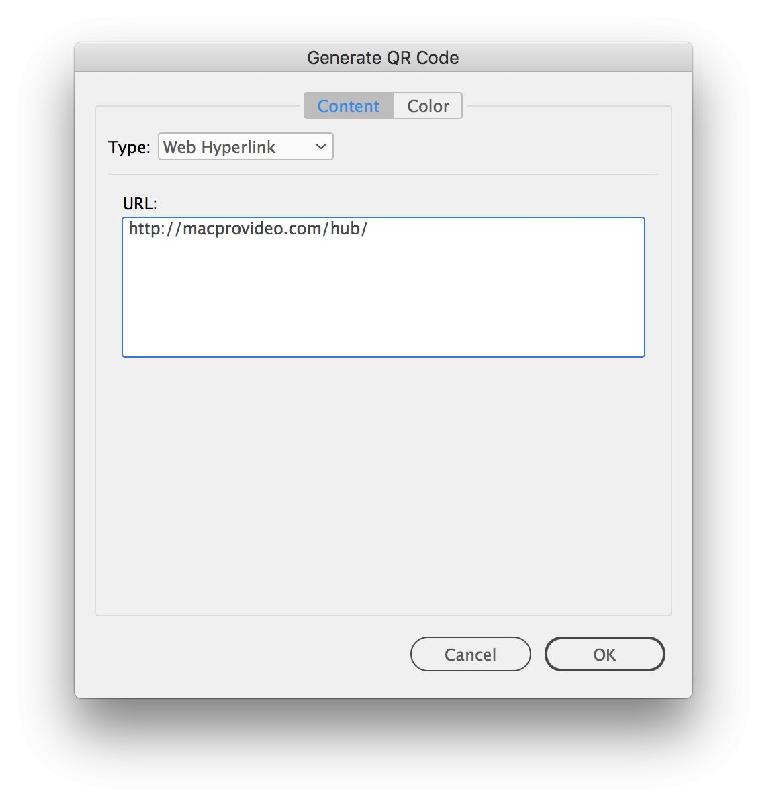 If you know your URL and have InDesign, QR codes are easy to make

Each of these will be printed on a sticker and placed somewhere obvious near each stop. While QR codes have seen spotty popularity in recent years, iOS 11 quietly added a reader to the Camera app, so everyone is able to use them without downloading an app first.

To capture the images, I used my Xiaomi Mijia Mi Sphere, mounted on a legged monopod to minimise the footprint of the camera support. But here’s where it gets tricky. Few cameras can capture the dynamic range of a scene which is part in shade and part in sunlight, and 360° cameras, by definition, have a lot more to deal with. The Mi Sphere lets you shoot bracketed images (regular exposure, overexposed, underexposed) so I decided to bracket the whole shoot. It’ll be easy, I thought — but I was wrong. Turns out that a legged monopod moves ever so slightly in a breeze, and that makes combining bracketed shots a lot harder than you might have thought. More on that later.

This is a bit of a Frankenstein-type setup, but keeping the camera support small is important

Walking up and down the street to take photos, you’ve got to consider many things: lighting, if there are people in shot, if you can see the next location from the previous location, and where you, the photographer, can hide to avoid being in the shot.

I could control the camera (and see a feed of its image) on my phone over wi-fi, so at each stop, I positioned the camera, made sure the monopod was stable, then hid behind a nearby bush/car/wall, and triggered the bracketed shots. Repeated at each stop, in about an hour I’d walked the length of the main part of town, plus I had a full set of shots and battery power to spare.

As with many outdoor photography projects, you’ll be at the mercy of the weather, and unfortunately there were dull clouds the whole time I was in town. Good for shadows, sure, but not good for capturing the town’s normal blue skies. I did take a couple of sets of shots on different days, but it didn’t clear up completely until after I left. Ah well.

As I explained in my 360° training course, you can actually use Final Cut Pro X 10.4 as a 360° photo manager. You can reorient images, fix horizons, remove the camera supports from the shot, and perform advanced color correction — and I needed all of that. But hang on — combining bracketed HDR images in FCP X? Why not use a regular photo editing program’s HDR mode? Because most HDR-capable apps scale and rotate the images to combine them, and that doesn’t work with 360° equirectangular images. Photoshop may have eventually worked, but it’s not fast, and I knew the tools in FCP X were up to it.

Stacking each set of three shots on top of one another in a timeline showed me that two shots were enough to rescue each image, using the brighter clouds from the darker exposure and the rest of the image from the regular exposure. To select the more detailed clouds, I used a Luma Keyer, sometimes a Graduated Mask, and also the Draw Mask effect with a strong feather. In most cases this was pretty straightforward, but it did take a little time to get right. 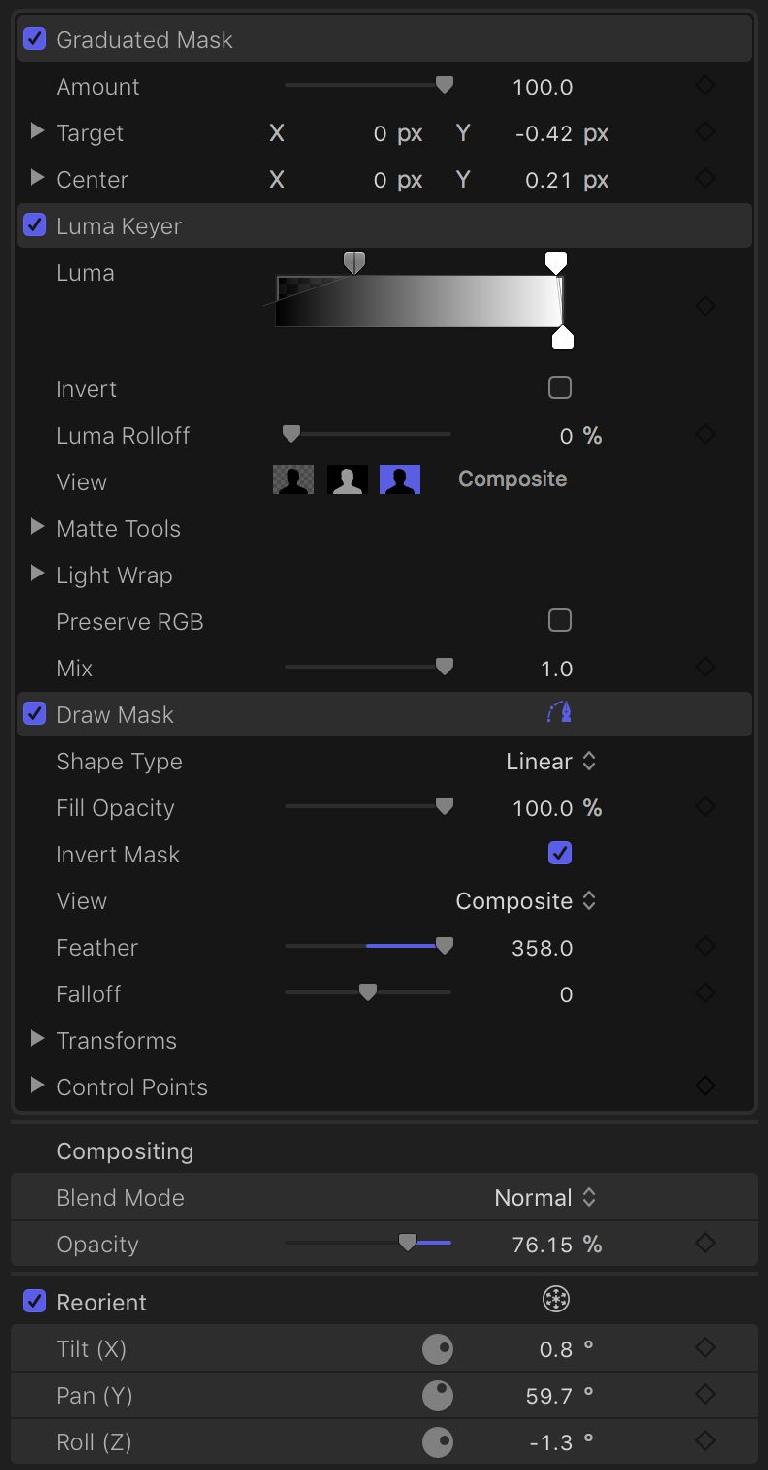 Masks, keys and reorienting for a manual HDR effect

Reorienting each image was important, because the camera had moved slightly between shots. It’s easy to be precise, because holding Option while dragging on the orientation numbers in the Inspector lets you “gear down” to make fine adjustments easy. Finally, I needed to position the “next stop” icon at the correct position in each photo. It’s a simple 2D image, and positioning it was straightforward.

360° Adjustment Layers To The Rescue

Now that I’d reoriented all the parts of all the shots I’d taken, how do I cover the nadir and correct the shots together? With an adjustment layer, of course! A tiny wrinkle — it turns out that you can’t just use a regular adjustment layer, but you need a 360° adjustment layer, and I didn’t have one handy. In Motion, make a new Title, set it to 360°, delete the text, save, and you’re done. 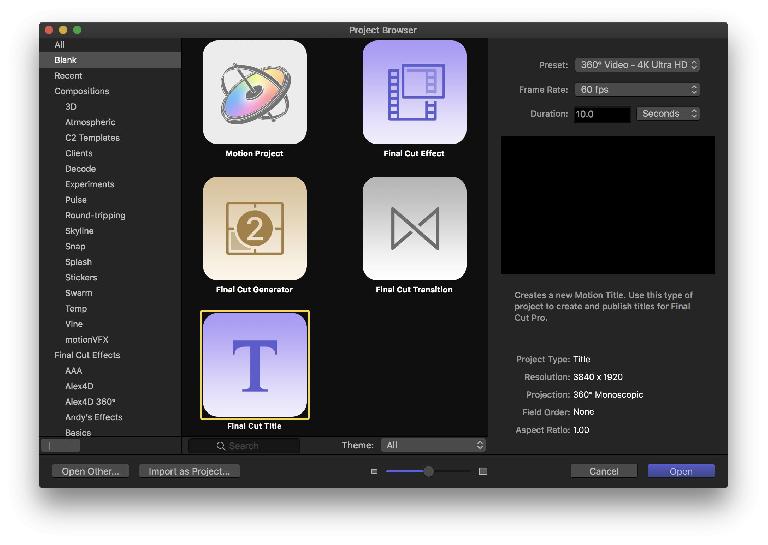 Stacking one of these on top of the manual HDR images lets you correct them together, use 360° patch to cover the nadir, and (craziest of all) reorient both images together to make sure the exported image is facing the right way when it’s opened. Phew!

Here’s a 360° Adjustment Layer in action, with a patch on the nadir and a Color Curves applied

With only 16 images, I decided to export my JPEGs manually, but any more and I would have used my 360° image export workflow from this article. It didn’t take long. 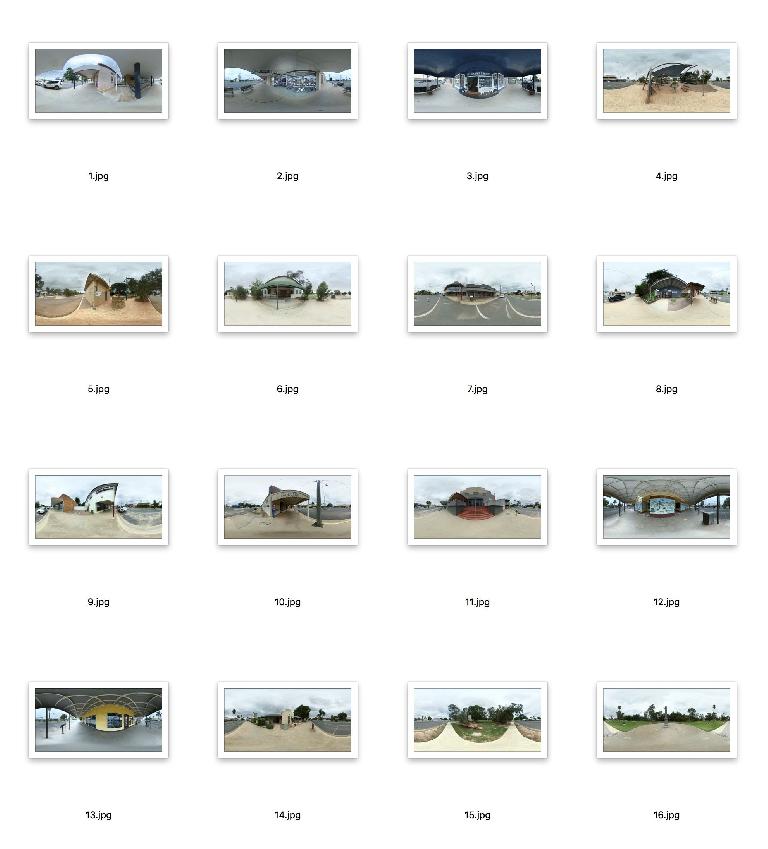 Armed with my 16 high-res images, I loaded up Marzipano’s editor (a browser-based tool that doesn’t upload anything), opened up the first image, set the title, created informational hotspots to let people know what they’re looking at, exported to a folder… and then did that 15 more times. 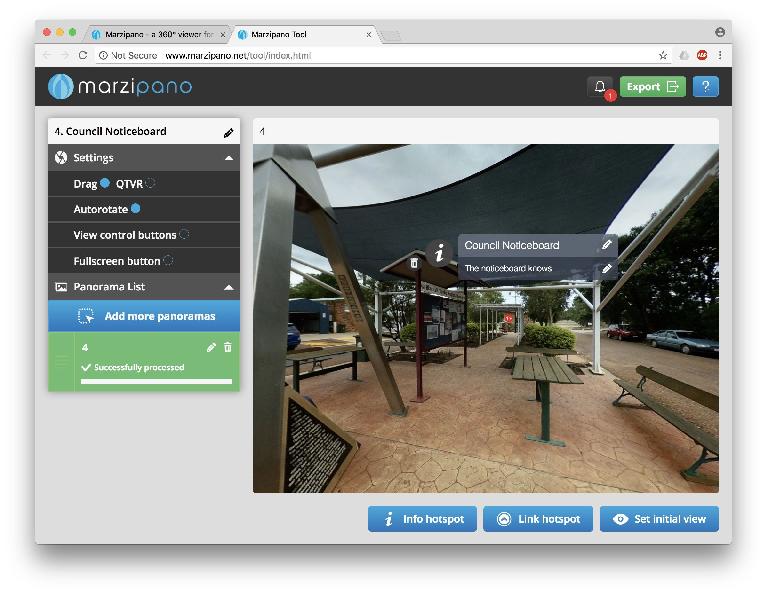 Here’s the noticeboard in the middle of town — and can you see the red logo that tells you where to go next?

With the panoramas done, I just had to do everything else! Write instructions, build a website around the images, design some logos, test it out, make sure it works — the usual. Those steps probably took longer than the 360° photo processing, but it’s nothing fancy. 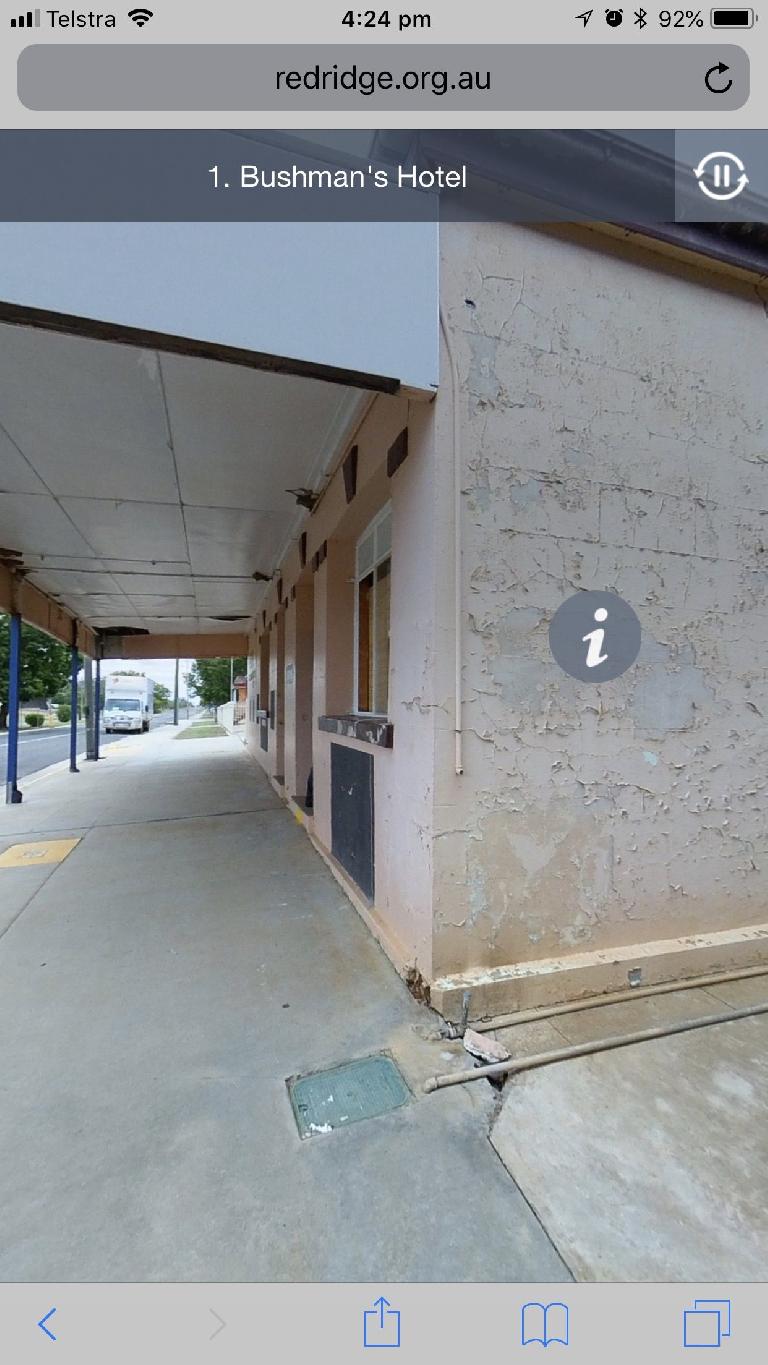 The first stop on the trail, as seen on a phone

Right now, the project is live and online (scan the QR code above if you’d like to see!) and it ticks a few boxes that I haven’t seen ticked before. By making the 360° trail something you have to physically engage with, visitors will actually engage with the town rather than sitting at home. It’s something new without being something scary.

Here’s how it all looked with everything in play

FCP X proved to be an important part of the process, and though I’m sure there are other ways to get the job done, I suspect it would have been a somewhat painful, manual job no matter what. If this is the price of pushing the envelope a little, I’m OK with that.

Dream It. Do It.
Do you want to learn Multicam Techniques?
Yes, I want to learn!
No Thanks, I just want to read the article.
Feedback
How are we doing?
We'd love your thoughts, feedback and questions regarding our new site. All feedback is appreciated!
We do not respond to this form! If you need support, please visit our support page.
Thank you for your input!
Your message has been successfully sent
Course Advisor
Don't Know Where To Start?
Ask A Course Advisor