Logic Pro X being able to now read FCPXML is a great boon to Final Cut users, when needing to deal with professional level audio work. Yet when going from Final Cut Pro X to Logic Pro X via FCPXML, there are some caveats you need to be prepared for. I call this 'the fine print'. In this article, we will look at what is necessary to create a successful workflow between the two apps.

The first thing to watch out for is audio sample rate. There shouldn't really be any issues, but it is simply good practice to be sure all audio in an NLE timeline is the same sample rate. The standard audio rate for video is 48 kHz. Audio, especially dialog that is not at the same sample rate as the timeline's settings can cause drift, which becomes more and more apparent over time. But if you really must use audio of differing sample rates in your project timeline, this workflow to Logic shouldn't really be an issue, as we'll see later in this article.

The second thing to be aware of is that Logic will not read all of the video formats that FCPX can. It can only read the most Mac-friendly QuickTime formats. For example, even though I can edit REDCODE RAW files in FCPX, when I export that project timeline as an FCPXML, Logic won't be able to play back the video, since it can't read that video format itself. In these cases, use one of two workflows. Either go into the FCPX Preferences and switch Playback to Proxy Media, if you've already created such. Or export a Master File as we'll discuss later in this article.

Finally, and this is very important, you'll need to break apart Compound, Sync, and Multicam clips. Logic as of this writing gets very confused when trying to read this stuff from FCPXML files. If you have these, I recommend duplicating the project, then in this new project timeline breaking things apart in the duplicate timeline. This keeps your original intact, and lets Logic lay your audio clips out as it should.

To simply get just the audio clips in your project from FCPX to Logic simply open that timeline, go to the File menu, to Export Project XML. You can only export a project timeline with FCPXML. You'll have the option to select a Metadata View from a drop-down menu. This sets up what metadata is included in the exported file. For the majority of cases, the Basic selection will work just fine. Logic won't deal with much of the advanced metadata presented in the other views, anyway. 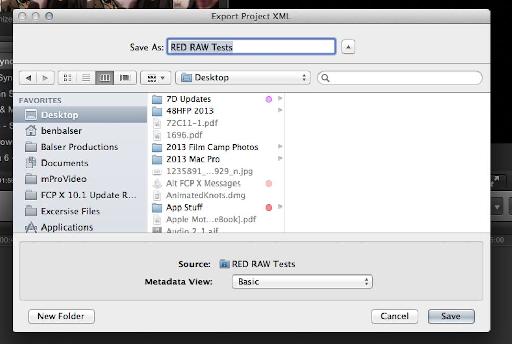 If you are using optimized or proxy media, and want Logic to use that video, it will automatically be imported with your FCPXML file. If you used some other none native Mac-friendly QuickTime format Logic may not read, then you'll want to export the video only of your project as Apple ProRes Proxy. The resulting movie can be a floating window or be confined to the static Movie pane in Logic.

If you want a video track along the top of your audio clips as an easier visual reference, you'll need to export a Master file in FCPX, setting the export window settings to export audio only, and as Apple ProRes (Proxy). In Logic, you'll go to File, to Movie, then select Open Movie. Finally you'll want to open the Global Tracks where the Movie track is hidden.

To import this file into Logic, open Logic and create a New Empty Project from the browser that shows when you first launch it. It will ask you to create a track, as an audio project must contain at least one track. Set it as an Audio track as seen below. 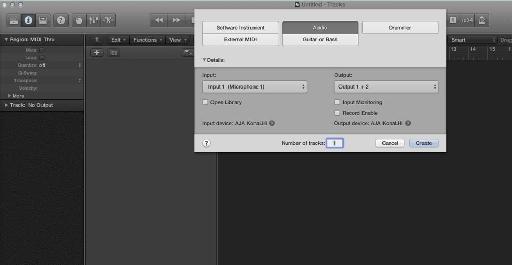 Then simply go to File, to the Import option, and choose Final Cut Pro XML. Depending on the size of your project, it will run through a read process, and end up with your timeline's audio clips all laid out. If you used clips of differing sample rates, Logic will prompt you to chose which sample rate to use, normally 44.1 kHz or 48 kHz. Select 48 kHz (unless you have a need for 44.1) and all audio clips of other sample rates will automatically be converted. I've found this conversion to be very efficient. Next, if your FCPX project timeline frame rate is different than what is set as the default in Logic, you'll be prompted to make another choice. By default Logic is set to 25 FPS, but most of us are using 30 or 29.97 or some other frame rate. Simply select the frame rate your FCPX project was set to, and Logic will conform to that frame rate without issue. 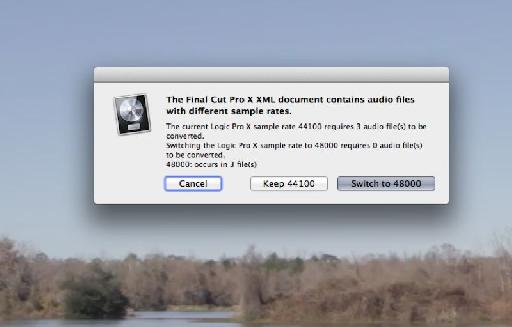 When you import FCPXML Logic will automatically look for the video files, and present you with a full resolution video preview screen. It may take up most of your monitor. No worries, either grab a corner of that screen and resize it, or right-click inside the screen and select one of the smaller sizes, such as .25 (one quarter). This is a floating window you can move around freely. If you're like me, you hate this, and prefer the Movie pane. Simply close that floating window and you should see your movie show up in the top left pane of Logic's interface, above the Region and Track panes of the Inspector (shortcut is simply 'i'). 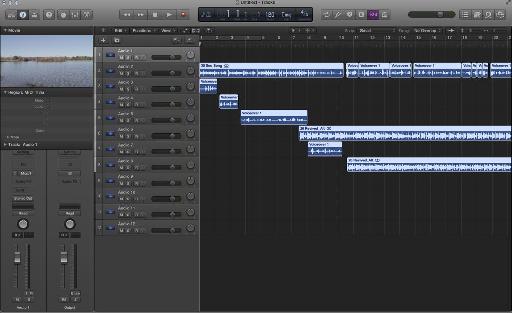 If you had to export a Proxy video file, import it by going to the File menu, to the Movie option, and then selecting Open Movie. Chose your Quicktime file and it will work the same as above, except you also have the added Movie track. Open the Global Parameter button and see a movie track along the top of your audio tracks.

Remember to immediately Save in Logic (Command-S). In the initial Save window, choose Folder and uncheck all other options. By default it will go into your Music folder, into a sub-folder called Logic, and then into a Folder with the name you give it. A very easy system easy to keep track of your Logic work. 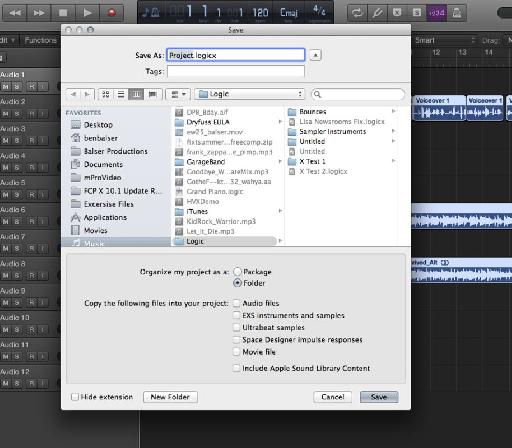 If you get to a point where you want to version your Logic project, simply use Save a Copy As from the File menu.

Also be aware that Logic only refers to original media, never actually altering it, in a non-destructive manner, just like Final Cut.

Once your work in Logic is done, it is time to export to go back to Final Cut. There are two main workflows for this. The first is to Bounce Down all of our audio to a single, self-contained stereo or surround sound AIFF file, in which you are locked in to the final mix. The second is to export an FCPXML file that leaves all of our individual audio clips available for furthering editing and trimming in FCP X.

Bouncing Down is an old recording studio term referring to the process of bouncing multiple tracks of recorded tape to only one or two for the final mix. You have one audio file fully mixed down.

When your work is completed in Logic, go to the File menu, to Bounce, and select Project Or Selection (Command-B). For a standard AIFF file set to video standard audio specs, configure as seen in the picture below. The bottom left of the Bounce window shows an estimated file size and processing time. Then simply click the Bounce button, and import the resulting AIFF file into FCPX as normal. This is the most reliable and easiest option for getting your work back in to FCPX. I highly recommend always doing a Bounce to get your work back in to FCPX, simply due to its reliability. 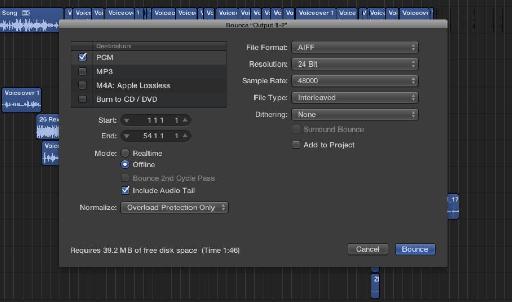 This method gives us an XLM file to import in to FCPX which will result in a new Event, with new audio files and a new project timeline containing all of our audio clips. As of this writing I find this method to be very buggy and advise not to use it until Apple has ironed out the XML workflow for Logic a bit better. I am finding clips all start at the beginning of the timeline, they're not in order, the video clip is not correct, there are simply too many issues for it to be workable at this time. When Apple fixes this workflow, we will update this article. One note about exporting XML for Final Cut from Logic is that you'll have a choice to make. Export it as a Compound Clip or as a regular project timeline. It is simply checking or unchecking the Export As Compound Clip checkbox in Logic's export window. Either way, you get the exact same content and result. The only difference is that one has a Compound Clip in a new Event that you can drop in to other timelines right away. The other gives you a project in a new Event. Both give you all new clips, which are exported from Logic to the same location as your FCPXML file.

The FCP to Logic workflow is not a perfect one yet, but shows that Apple has gotten a start to a round trip method that is very useful. As long as you know how the round trip workflow works, the caveats to prepare for, you should be able to utilize this without much problem. I hope this article clears the subject up, and look for in depth Logic Pro X training here on macProVideo.com.

Ben Balser
Ben Balser studied educational psychology at Loyola University, and after retiring from a 20+ year IT career, now produces, consults, teaches, and rents equipment for media production as a full time job. As an Apple Certified Master Trainer, he ran the Louisiana Cajun Cutters FCP user group for 8 years, taught post-production at Louisiana State University and has lead their annual teen filmmaking bootcamp. He teaches currently for AATC facilities across the USA and for The Orchard Solutions. He has consulted for higher education, government, broadcast and private production facilities.
Related Videos
Comments (8)

Dream It. Do It.
Do you want to learn Working With Audio?
Yes, I want to learn!
No Thanks, I just want to read the article.
Feedback
How are we doing?
We'd love your thoughts, feedback and questions regarding our new site. All feedback is appreciated!
We do not respond to this form! If you need support, please visit our support page.
Thank you for your input!
Your message has been successfully sent
Course Advisor
Don't Know Where To Start?
Ask A Course Advisor