Just over a year ago, I sat in Infinite Loop’s Town Hall theater, where Steve Jobs launched the iPod, to see FCP 10.4 released. Since then, we’ve had four point releases, and the latest of them landed on Wednesday 14 November, just before the FCP X Creative Summit. As a speaker, there’s a moment of panic where you scramble to discover if your presentation has just been superseded, but this one wasn’t a problem. So what’s new, and what was the Summit like?

The biggest improvement, and the gift that will keep giving, is the new support for Workflow Extensions, panels that live natively within FCP X. This lets third parties create tools that can exist outside of effects and titles, with access to your clips and projects, and with much greater integration into FCP X than we’ve seen before. 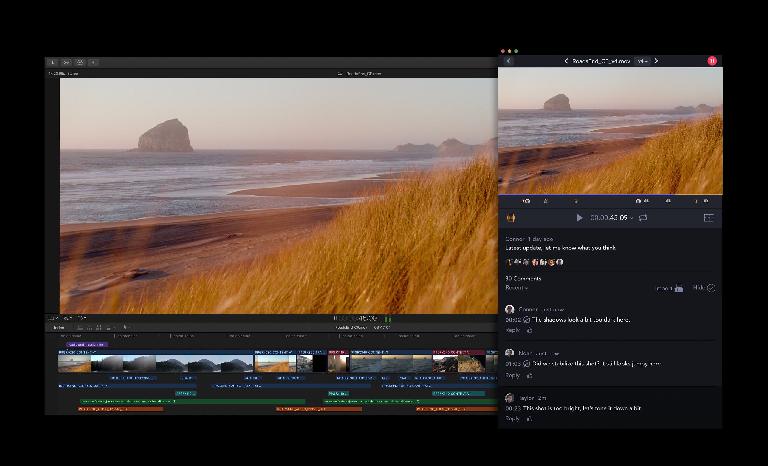 Having the frame.io service inside FCP X isn’t just convenient — it allows for unique features too

Online collaboration service frame.io presented their solution at the Summit, and it’s available now. As well as streamlining the process of delivering draft edits to clients (and among many other features) you can even jump straight to the right spot in your FCP X timeline by clicking a timecode-linked comment in the workflow extension’s new floating panel.

Shutterstock is now available as an extension too, making it very easy to integrate their stock clips into your projects. CatDV is the other launch partner for workflow extensions, allowing a deeper integration with the long-lived digital asset management tool from Square Box Systems. All these new solutions are just a starting point — they’ll become more capable themselves, and we’ll see many more solutions making the jump to workflow extensions soon too.

A big deal for color correction and grading, the new comparison viewer makes matching shots far easier than before. It allows an editor to compare the current clip with not just the previous and next shots in a timeline, but with up to 30 saved clips. Scopes can be shown for both clips, and if you place those scopes in a vertical layout, underneath the video, you’ll find it easier to make one shot match the other. 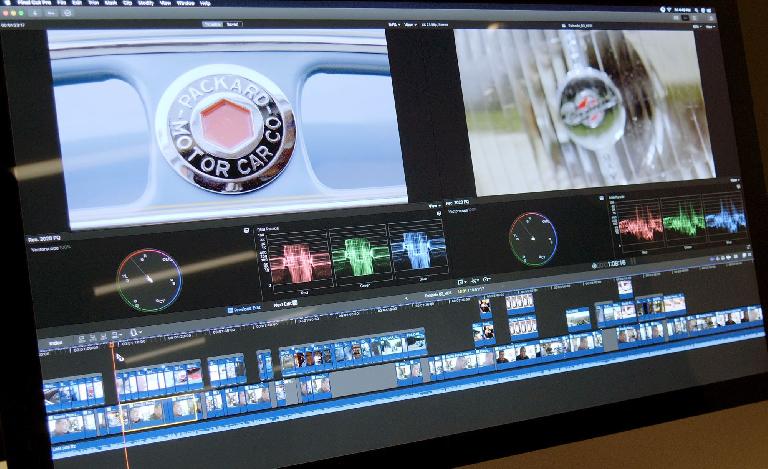 Above the Comparison Viewer, you’ll see a switch between Timeline and Saved. With Timeline chosen, you can see either the previous or next clip in the timeline. With Saved chosen, you can use the new floating window, the Frame Browser, to pick from shots you’ve stored there. To store new shots, park the playhead on a timeline, then press the Save Frame button — easy. This feature will help a lot of editors to match shots within a sequence, and to give a whole sequence a custom look based on shots you’ve been given. It’s a big deal, and very welcome.

Officially this is “Batch Share” but it doesn’t matter — you can now export many browser clips or projects at once. Select them all, then export them all together. 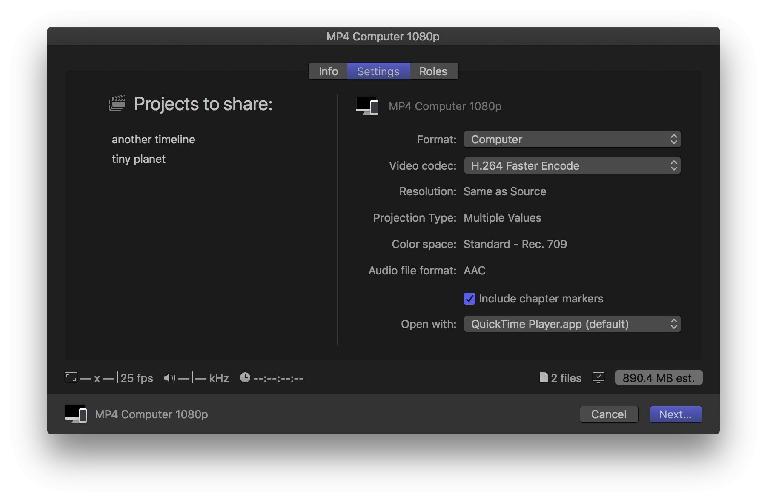 Select whatever you want, then export them all

If your work requires you to create many videos (different aspect ratio proects for social media, perhaps) then this lets you send them all out in one operation. Finally.

While I tend not to use much noise reduction myself, those who do find it invaluable. The most recommended existing option seems to be Neat Video, but even its staunchest fans will admit that it’s not fast, taking a long, long time to process. 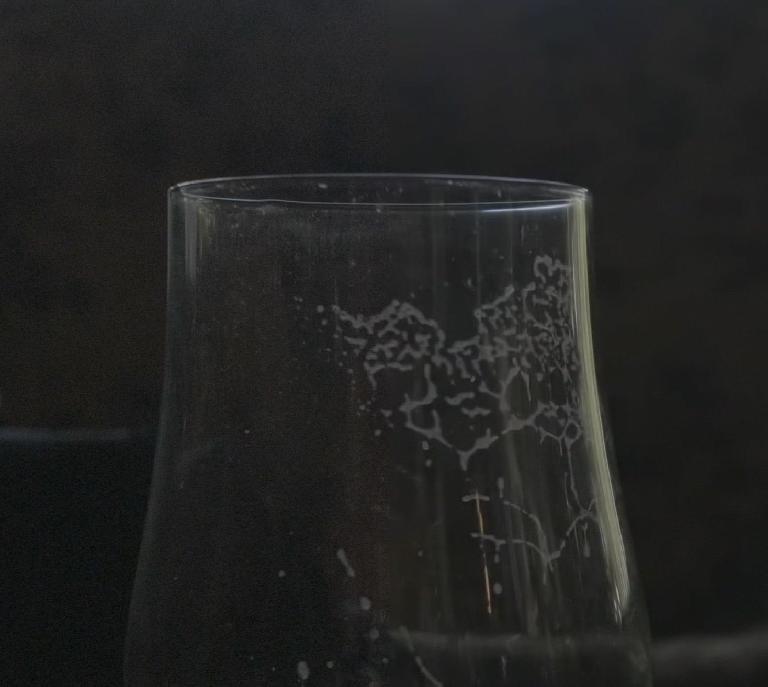 Before on the left, After on the right, at Maximum with no added sharpening

Apple’s new effect is much faster, and if you need to clean up a shot, it’s going to be worth trying this before committing to a really long render with anything else. From my tests, it looks pretty good.

The captioning support in 10.4.2 didn’t include SRT support, but it now does. This means you can import an external SRT file, and also export an SRT file to platforms which prefer it — like Facebook. 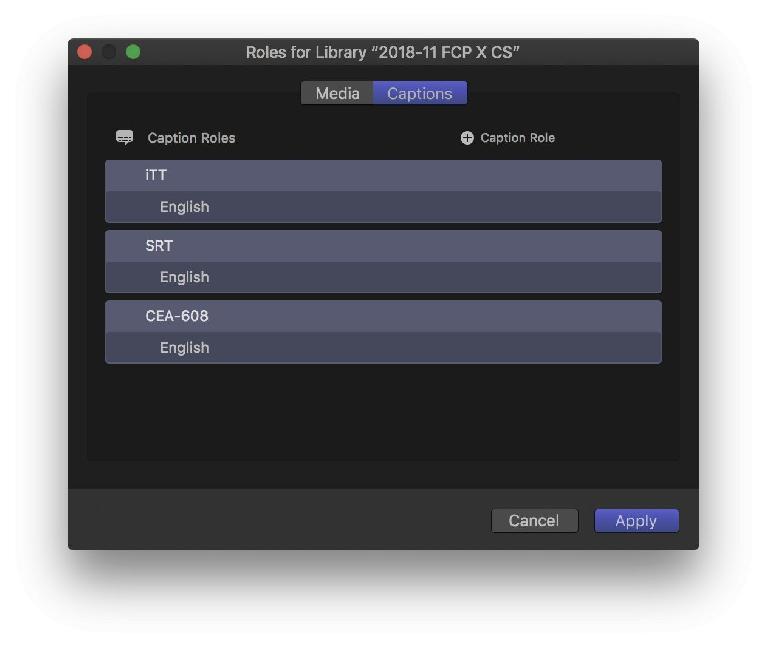 SRT are common, and now much better supported for import and export

It’s also now an option to hard-code your captions at export time, for platforms which don’t support captions at all. This is a big win for wider accessibility support, and given the benefits of captioning for SEO on social media, every editor should really be looking to include captions in their work if at all possible.

The 10.4 release added a suite of 360° tools, but Tiny Planet was missing. No more! You can now drop 360° footage into a regular timeline, choose Tiny Planet from the new Mapping drop-down in the Orientation pane, tweak a few settings, and enjoy the silliness of wandering around the small world near your camera. 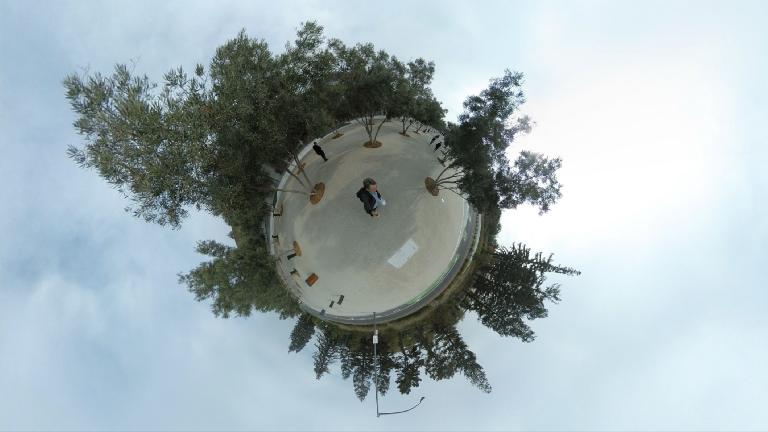 Just outside Apple Park Visitor Center, on my own world

There’s also a new comic book effect which has jumped across from the iOS Clips app, and I’d expect to see a number of dynamic “motion comics” springing into life soon. 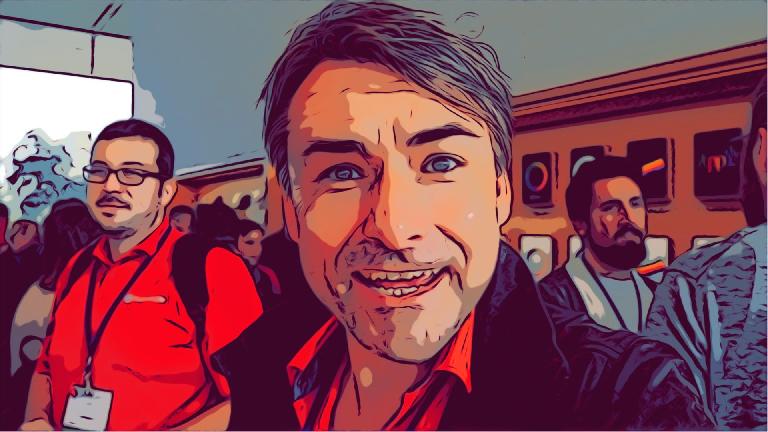 And inside the Visitor Center, in a comic

There are a number of presets, and you can customise them all quite a bit, from heavily posterised to heavily smoothed. It’s pretty wild that you can now render the famous A-Ha Take On Me clip effect in real-time.

A subtle improvement but a welcome one. When you drag down through a secondary storyline, it now selects the storyline and not the clips inside the storyline as before.

This drag operation selected the storyline, not the individual clips — yay!

However, if you drag sideways into a storyline, the individual clips will indeed be selected. It makes sense, and it’s a big help.

Like it says in the title, it’s a giant window for timecode, but it’s not just for the project. A second window for source timecode shows all the timecodes and roles for any clips under the playhead.

Showing names and roles for all the clips under the playhead Classic Apple: not doing it at all until they do it right. This one’s a welcome addition.

The biggest change for Motion is that the color tools (all the curves, wheel, and color board) from FCP X have now jumped across to Motion. They can’t be published back to FCP X, but they’ll make grading in Motion much simpler. The Comic filter and Tiny Planet have come across from FCP X, and there’s improved text handling in non-Latin languages. 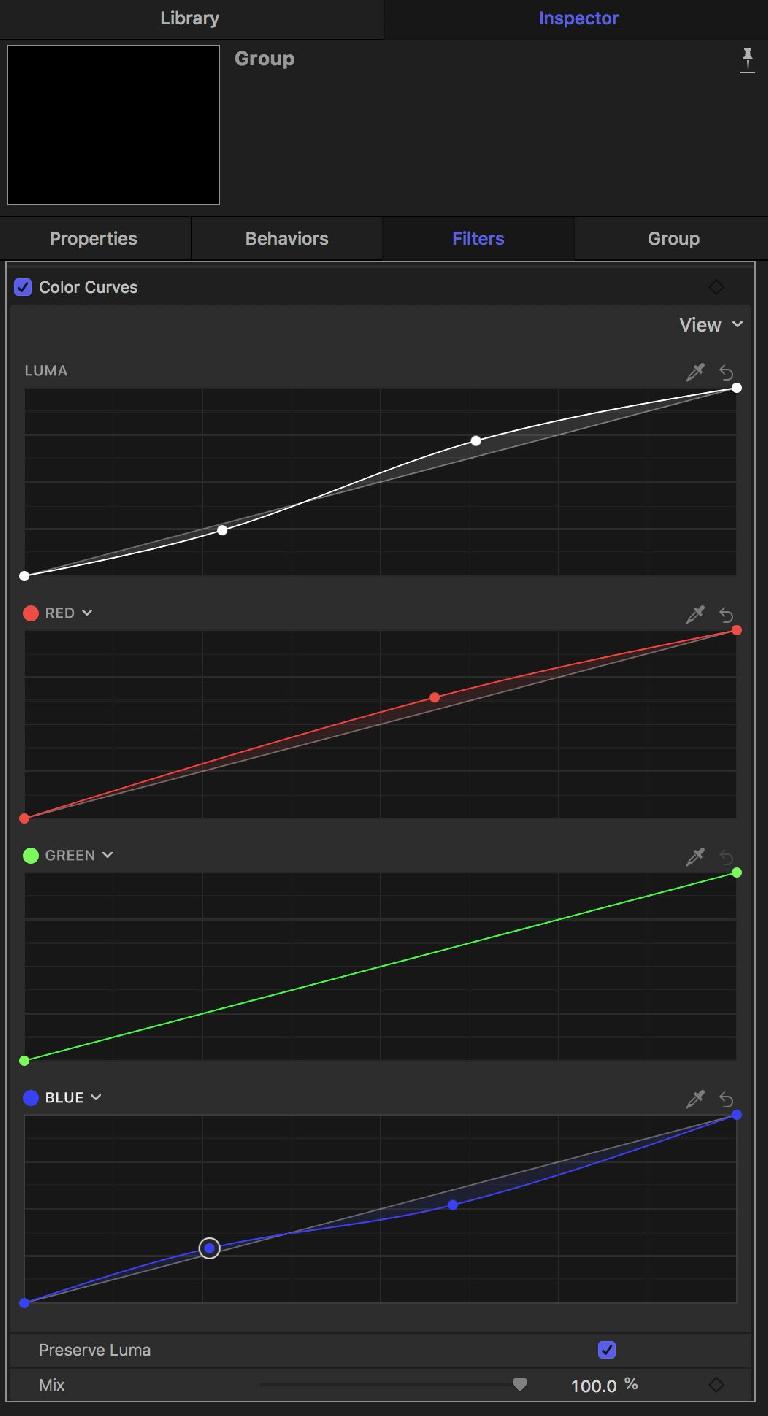 All the curves, now inside Motion

Compressor is finally 64-bit, and can use all the RAM in your Mac! Surely that’s enough? If not, SRT support is here too, as well as some automatic configuration based on the source media.

Legacy Media Issues On The Horizon

As this update hit, several users were presented with a new warning, letting them know that in the next version of macOS, some media will no longer be readable.  This is a consequence of the sunsetting of 32-bit code at the OS level. Anything that relies on classic QuickTime, and which doesn’t have a modern 64-bit plug-in or direct support in FCP X, is at risk. Built-in codecs which will no longer work include:

But you can add the third-party HDCAM-SR and software-generated DNxHD to that list too. The suggested solution is to transcode them now to ProRes 422 if you can. If you wait, you’ll be relying on an updated third-party plug-in, or on a third-party transcoding tool. It’s not going to be impossible — third-party transcoding is still an option — but older QuickTime plug-ins are going away. It’s going to get harder to work with some formats.

And About The FCP X Creative Summit…

This was my third year attending the FCP X Creative Summit in Cupertino, and my second year as a speaker. I’ve been to NAB, but the Creative Summit is more focused, smaller, and more friendly. Like the Yosemite conference I went to back in 2015, the tighter focus means greater access to all the attendees and speakers. Not only did I get to talk once again to many of the well-known faces in the FCP X and training world, but I enjoyed drinks, dinner, a quiz night and good chats with them. On top of that, I was able to hear about the new release in an official Apple presentation on campus, then talk to many members of the Final Cut Pro development team directly. On the weekend, I got to hear from many great speakers on all kinds of topics — tips on working on promotional materials for Ken Burns documentaries, how to use dynamic, engaging subtitles to add emotion a deaf audience would otherwise miss, and how I should be using Logic more when scoring my own work. If you’re an FCP X editor and have a chance to go, it’s absolutely worthwhile.

The recent updates to FCP X and its companion apps have added many features that professionals have been asking for — the team is listening. While no software is ever perfect, FCP X is getting better with every release, and I’m sure there are more (free!) updates coming soon. Going forward, I can’t wait to see what happens with Workflow Extensions, but it’s off to a great start. 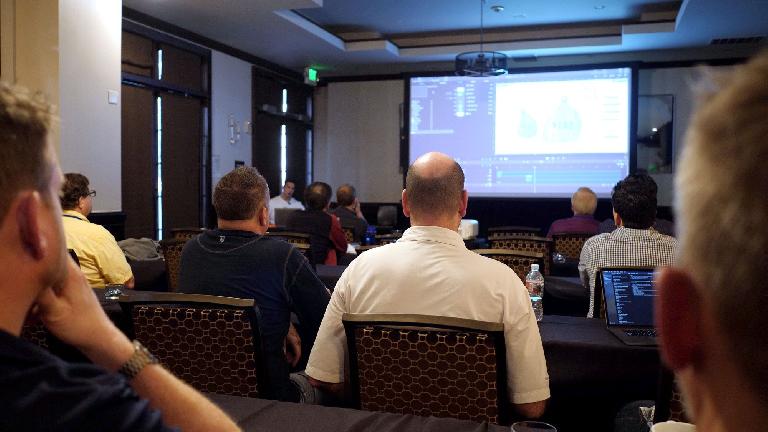 One of the sessions in the Motion stream

If you’re in the middle of a project, perhaps hold off until you’re done, but everyone else should jump in with both feet. And next year — see you at the Summit?