All Articles InDesign
InDesign: Fixes for Common Typographic Mistakes (including Runts!)
Iain Anderson on Mon, June 16th 0 comments
Language
Designers tend to have dual roles. Not only do they often correct bad typos, but also (and importantly) they find solutions for typographic mistakes. Iain Anderson finds fixes for InDesign users.

A good designer is someone with more attention to detail than most. Part of their job involves catching all the little faults in the dodgy Word documents their clients inevitably send their way, and quietly correcting them so that the end result is pleasing and typographically accurate. Spelling is one of the easiest, and we won't be looking at how to correct that here. Instead, we'll be showing several of the most common typographic mistakes, and ways to fix them.

One of the most basic ways to fix problems is to search for them and replace them out of existence. Indeed, the GREP search in InDesign will let you find and destroy some truly obscure problems, and it's worth looking deep into GREP if you perform any kind of text processing on a regular basis. (In fact, once upon a time last millenium, I built a menu-generation tool with nothing more than Photoshop, Nisus Writer's GREP feature, some kind of system macro tool, a coathanger, and luck.) 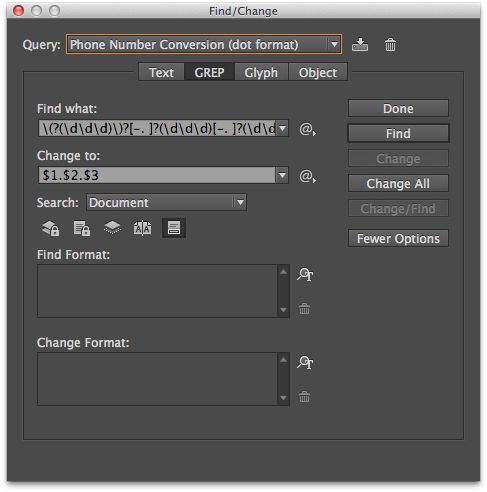 Phone number conversion? Not in my part of the world.

GREP is great. But you don't always have to search and replace to use it. It's possible to create a Paragraph Style which applies a Character Style to something found by a GREP search. At the most basic level, you could create a Character Style called Red, which sets the Character Color to red, then add a GREP Style which searches for your company name, and automatically applies the Red Character Style. You can use it to mask problems in your layouts rather than replacing them, which can be useful if you need to maintain links to the original text for some reason. 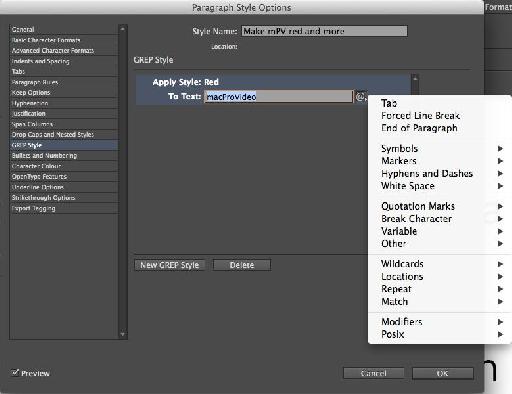 You can get fancy if you want, but you don't need to.

We'll use both these techniques to fix problems, and one or two other strategies too.

First off, though'"some fonts are just broken, and one popular font that springs to mind is Gill Sans. Specifically, the kerning pair value of a space and a capital A is set to -100, making it look like you've missed out the space entirely. Bad. Don't even think of writing an essay on Tchaikovsky, either, because that 'Tc' is just missing.

The fix is easy: if you don't trust the font, use Optical kerning (AKA let InDesign decide) instead of Metrics kerning (what the font said).

Two paragraph returns instead of one

Such a shame that more people don't use Styles in Word the way that we designers would prefer, isn't it? Instead of adding space between paragraphs automatically, in the styles, most people hit Return twice instead. (If you do need a line break rather than a paragraph break, of course that's Shift-Return.) 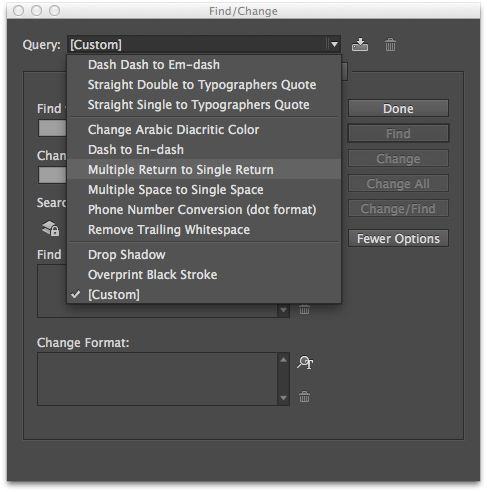 So how to fix this one? It's a job for GREP. Choose Edit > Find/Change, then choose Multiple Return to Single Return from the menu at the top of the dialog, then Change All. That's right, it's built in, along with'¦

More than one consecutive space

If you still have people sending you documents with more than one space'"especially after a full stop'"then this will fix it. I do understand that different organizations in different countries have different standards around spacing near em-dashes and so on, but this one is wrong.

Glad I don't have to remember that GREP expression.

It may have been appropriate in the days of the typewriter, but those days are long gone. In Find/Change, choose Multiple Space to Single Space and Change All.

Double hyphens instead of em-dashes

This one is also built-in to the GREP Find/Change presets, but there's another way. If you create a new Character Style called 'squished' in which the tracking is set to -100 under Basic Character Formats, then you can apply that style with a GREP style that searches simply for two hyphens in a row. 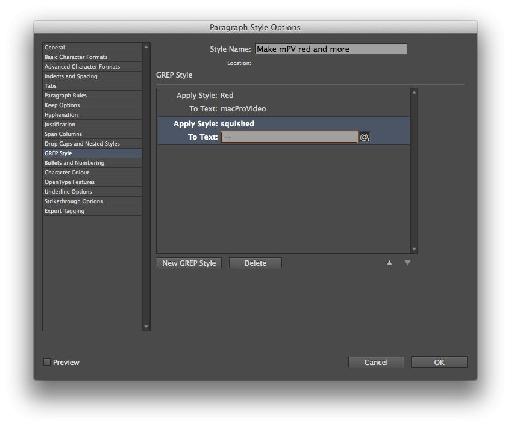 Here's the Paragraph Style that activates the Character Style.

They will magically smoosh together and look like a regular em-dash. If you're afraid of your client delivering a second revision of their document without a list of changes they've made and expecting you to just paste it over your existing text, GREP styles will fix the problem in an instant.

More than one consecutive full stop

This one's a little harder, because there are a couple of different things the author may have been trying to do. If they're just a little messy, they might have used 2-5 periods instead of the correct 3 dots in the special ellipsis character (Option-;). You could search and replace those easily enough. 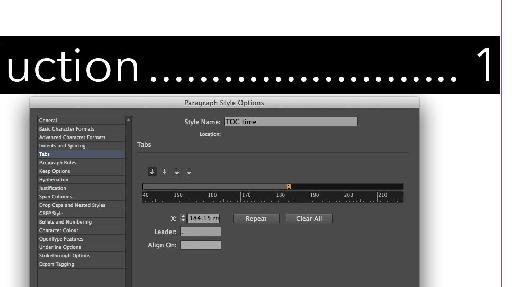 Leader tabs look like this, if you've not seen them before.

But if there are more, they may have been trying to simulate tabs with leader dots, and you'll need to create a style yourself to replace them.

Capitalize the first word of every paragraph

Nested styles to the rescue this time. Create a character style called 'CAPS' and choose All Caps from the Case menu. In your main 'body text' Paragraph Style, head to Drop Caps and Nested Styles, and in the Nested Style section, press New Nested Style and choose 'CAPS' 'through' '1' 'Characters' from the drop-down menus. 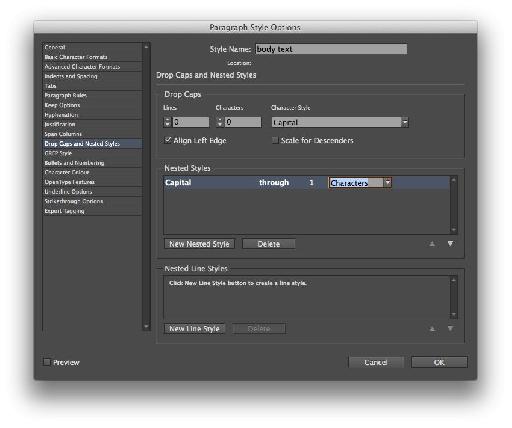 Set up your Character Style first, then this Paragraph Style.

Everything in that style will now start with a capital letter, which is a magical thing if some of them are in lowercase for some reason.

A runt: a single-word 'orphan' on a line of its own

One of the trickiest things to catch automatically, a runt is a single word at the end of a sentence which ends up on a line of its own. While you can catch widows and orphans using the Keep Lines Together option in Keep Options, you'll need to dig a little deeper for a solution to runts.

Once upon a time, that last word sat alone, but no more.

Last one: if you like justified text (or simply have to use it) then you need to use the right settings, or it's going to look pretty iffy. By default, the only control InDesign has is to adjust the spacing between words.

Because InDesign can do better than your local paper, just not by default.

Giving it the power to adjust Tracking and Glyph size by just a small amount is enough to rid most justified layouts of all those annoying rivers of white flooding down the page.

These tips aren't hard to do, and should save you a lot of time. GREP is a deep topic, and if you do delve deeper, you'll be richly rewarded'"so long as your mind is built the right way. If not: there's always copy and paste.

Dream It. Do It.
Do you want to learn Working With Text?
Yes, I want to learn!
No Thanks, I just want to read the article.
Feedback
How are we doing?
We'd love your thoughts, feedback and questions regarding our new site. All feedback is appreciated!
We do not respond to this form! If you need support, please visit our support page.
Thank you for your input!
Your message has been successfully sent
Course Advisor
Don't Know Where To Start?
Ask A Course Advisor