Paths are the fundamental part of drawing with Vectors in Illustrator, InDesign, Flash and even Photoshop. To really master using them to create shapes, or edit Clipping Paths, Masks etc in any of these Applications you must first master the Pen Tool. Not an easy task for anyone inexperienced with using them. This article will give you some effective tools and techniques to set you on your way. I've focused on Illustrator here but you will find most of the methods transfer across many Adobe CS applications

We're going to start with creating smooth, equal curved paths, to help with that some guides would be useful. Try this method to create a grid of guides equally spaced.

Draw a large rectangle on the page, any color it wont matter. 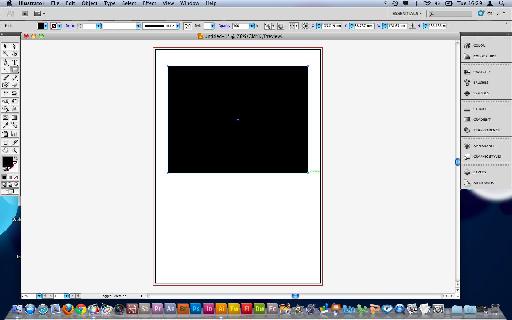 Now with the shape selected go to Object > Path > Split into Grid. In the window that pops up create 6 rows and 6 Columns. 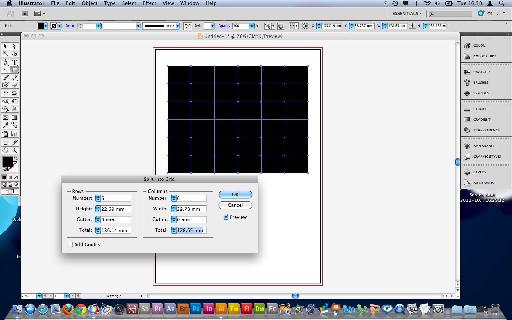 Make sure they have equal width and height, and set the gutter size to zero, then click OK.

The rectangle splits into a grid pattern. To turn it into guides choose View > Guides > Make Guides. 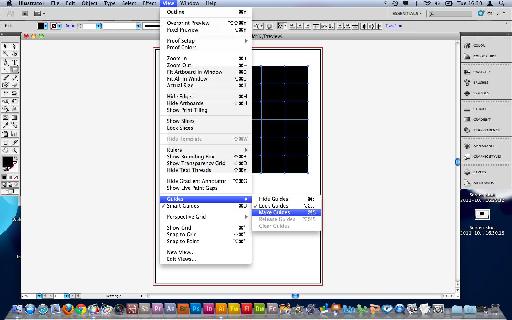 Now you are ready to start drawing paths.

Begin by selecting the Pen Tool and placing the cursor at the first crossroads of the grid guide you made. 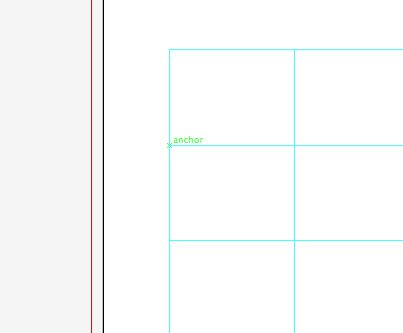 Click with the tool and drag down, along the vertical guide. Stop dragging and release the tool when you reach the next horizontal guide. This creates an anchor point where you clicked and handles the same length and angle as the guide.

To create a second anchor point, place your pen cursor over the next crossroads of the grid, (horizontally in line with the first). Click and drag straight up along the vertical guide  until the handle meets the next horizontal guide. 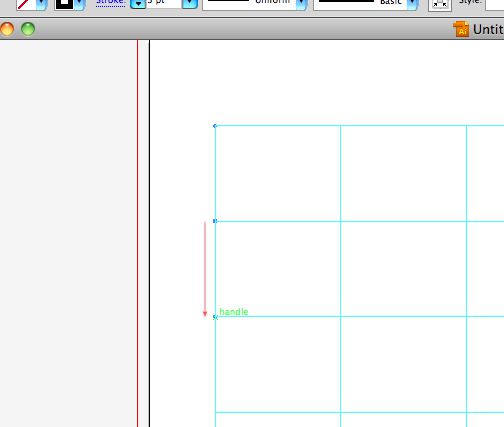 By keeping the handles uniform in position, length and angle you will see that you've created a curved path that is equal at both ends. Try and add one more along your grid yourself, remember to drag the first handle you create down and the second one up. This will create an S-curve shape 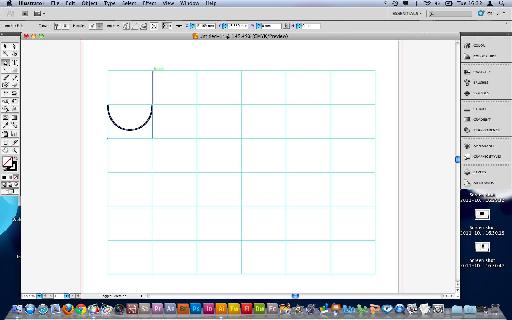 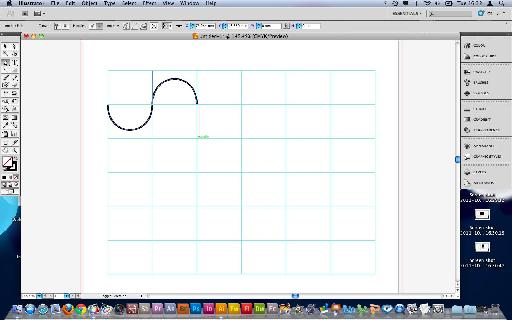 Now, you are ready to add a 4th curve, only this time the curve will go in the same direction as the last one you drew. So more of a W or M shape rather than an S. 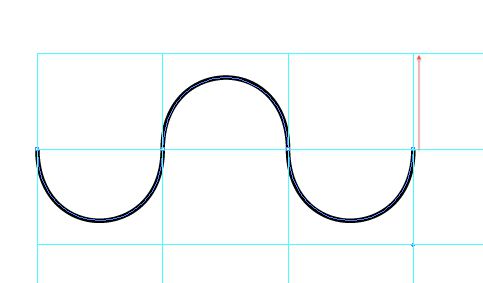 Before adding any more anchor points, press and hold the Option key and watch as it turns your Pen tool into the Convert Anchor Point tool. Release Option and it reverts back to the Pen tool again.

Now use that Convert Anchor Point tool to grab the handle you drew in the last step (the one pointing down) and move its position up, so that it sits exactly on top of its opposite partner.

The handle has two roles, firstly it will dictate the direction of the curve preceding it, once thats decided the trailing handles job is to dictate the direction of the curve proceeding it. In this case we have changed the next handle from being one that begins by curving down (the handle was pointing down) into a curve that begins by curving up (the handle now points up).

To test this, now try adding a further anchor point to the grid and drag the handle up again.

See? Using this Option-Drag technique on your handles now means that you can control curved Paths to do anything you need of them. 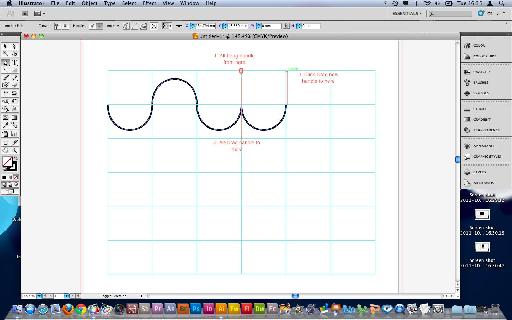 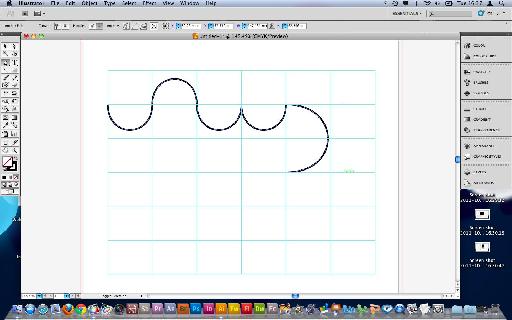 Step 6 - Round The Corner

Lets try curving round a corner. Take the last handle you drew and Option-Drag it to an angle of 3 O'Clock (make it a bit longer to).

Then Click on a grid point a few rows down and drag your handles out at an angle of 3 O'Clock. Try and make them the same length as you drag. 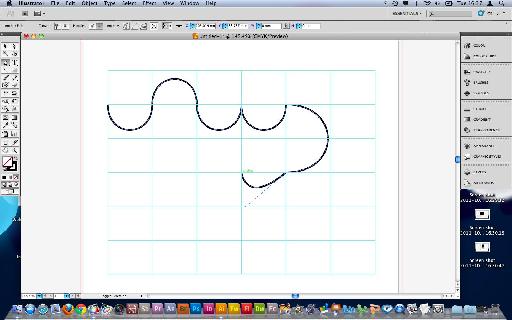 Now you want to return to adding straight line to this Path. Take the Pen tool over to another crossroads on your grid and click once (no dragging). Normally clicking with the pen tool creates straight lines.

Because one side of your path has handles then the line will curve from there. Use the Option and Drag technique to grab the trailing handle (the one at 7 o'Clock) and swing it round until it sits in line with the straight path. This will remove the curve from that side of the path. It's important that you keep the pen tool active at all times when you are drawing a path, which is why you're using the Option key to switch to the Convert Anchor Point tool instead of the tool palette. This is because changing tools at any stage would in effect close the path you are drawing and any further anchor points would begin a new path instead. This can be very frustrating.

Re-opening a path mid way through its creation couldn't be simpler however.

First change your tool to the Selection Tool, which closes the path (even though the stroke might not be visible).

Pick up the Pen Tool again and hover its cursor over the last anchor point. You will see a / symbol appear next to the Pen. 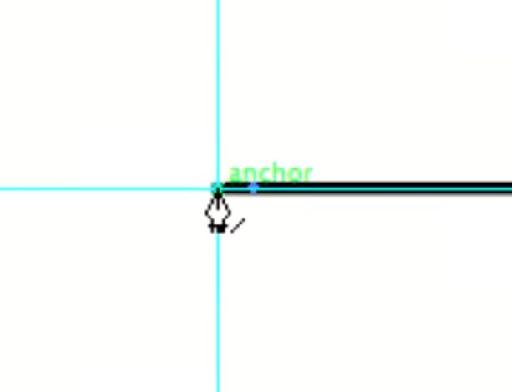 Click on the Anchor Point, then continue to add more anchor points where you want, the path will resume building again.

Another really simple method to join 2 paths instead is to simply select the 2 end anchor points (one from each path) that you need to join with the Direct Selection Tool. 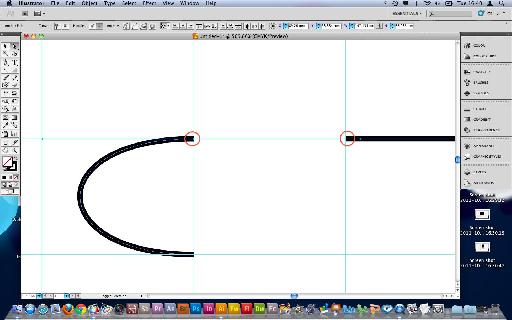 Press and hold Shift and click on one Anchor then the other (another method is to drag a selection box, or Marquis over the 2 points). Both points should highlight with a solid color, the same color as the path itself.

Press Command-J to join them together. 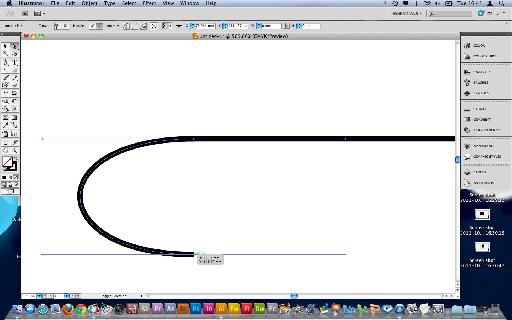 If you need to go back and modify any handles further, to better refine your path, pick up the Direct Selection Tool again. Use it to click on the Anchor Point whose handles require modification. The handles re-appear.

Use the Direct Selection Tool from now on to modify handles, just as with the Convert Anchor Point tool earlier, once the path is completed.

Tip: The convert Anchor Point tool when used on its own will turn curves back into corners, so we avoid it now.

Finally if you have added too many anchor points, use the Delete Anchor Point tool (you will find it behind the Pen Tool in the Tools Palette).

Click on the Anchor to be removed and it's gone.

The Add Anchor point tool adds more anchor points to an existing Path. Clicking on a path at the point where you need the additional anchor point with the tool will add one there for you. 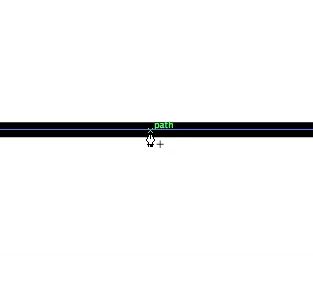 Now Im not trying to say that drawing paths with the Pen Tool will an easy thing to do now, but keep practicing these techniques until you can use them without thinking and you'll find that eventually they are!

Dream It. Do It.
Do you want to learn Working with Objects & Type?
Yes, I want to learn!
No Thanks, I just want to read the article.
Feedback
How are we doing?
We'd love your thoughts, feedback and questions regarding our new site. All feedback is appreciated!
We do not respond to this form! If you need support, please visit our support page.
Thank you for your input!
Your message has been successfully sent
Course Advisor
Don't Know Where To Start?
Ask A Course Advisor