Glitchbreaks is a universal iOS app for cutting, glitching and looping 'breakbeats'. Samples can be pitched up or down, you can jump between any of four loaded samples, and record your performance as a new sample. What's not to like?

Along the top of the window are the transport controls. Pressing 'Play' starts the currently selected sample, which plays back at the project tempo. To change pitch/tempo (Glitchbreaks changes both at the same time just like a record deck) you have two options:

You can reset the pitch slider and return to the project tempo by tapping the reset button on the transport.

The 'Diskette' button gives access to the file browser. Here you can load new samples to each of the four sample trigger pads. These can be from either the built-in library of loops, recordings you have made in Glitchbreaks, or from other apps imported via the Sonoma AudioCopy/Paste clipboard. 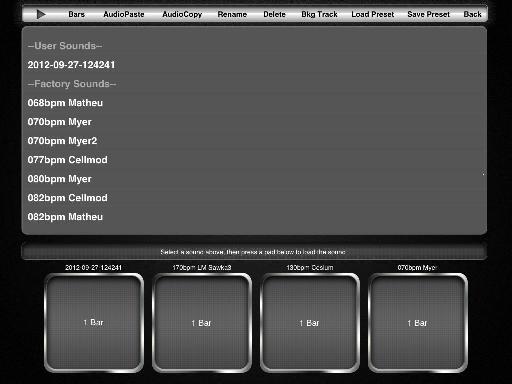 The real magic happens when you interact with the currently playing sample using the three performance pads. The loop modulation pad allows short loops to be activated within the sample. Start point and loop-length are determined by where you tap on the X and Y axis of the pad.

'Cut' activates one of four cut patterns that are set up by tapping the Settings button in the transport. An easy way to get to grips with this concept is to create a cut pattern with the first and ninth step of sixteen selected. When activated this will allow only the first two beats of the current sample (i.e. eight 16th steps) to play, because the cut pattern is allowing the first eight steps to play, followed by another eight steps starting again at the top of the sample. A total of four cut patterns can be set up and activated in this way. 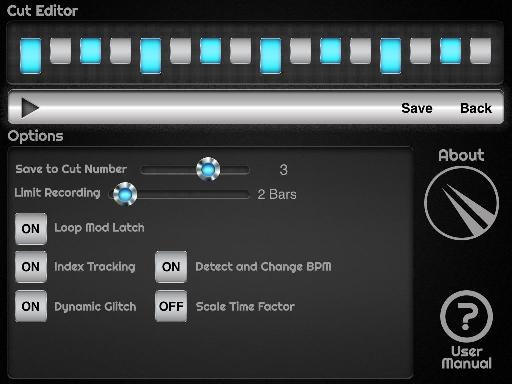 Editing a Cut Pattern in the Settings window.

For inexperienced 'glitchers' like me, a great feature that has recently been added is 'Index Tracking'. When activated in Settings, index tracking allows the sample to jump to where it was supposed to be before you started glitching, cutting or looping, so your performance always stays in time. This is particularly effective when using the Reverse button! 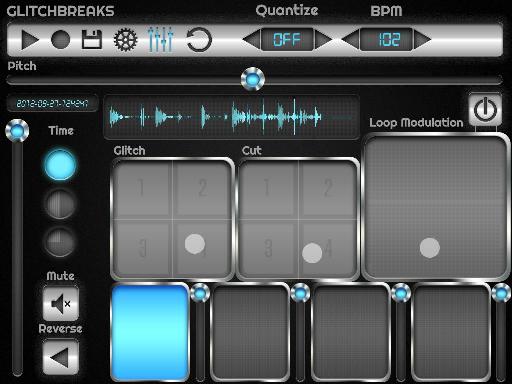 One feature I would really enjoy would be the ability to interact with the waveform directly by tapping on the waveform display, but as this display is only visible on the iPad is might be something for a future iPad-only version?

The first version of Glitchbreaks I tried did suffer a couple of operational errors while I was using it. The Cut button stopped functioning, during a particularly intense glitching session, but having reported this to the developer the bug was sourced and sorted, so you shouldn't have this issue - now that's customer service! The other issue turned out not be a bug - the inability to remove a backing track once added in the Settings, but this will also be addressed in an imminent update. Great to know these guys haven't just created an app and left it to wither on the App Store vine, to concentrate on their next project!

Overall, I had a real blast with this app and quickly became adept at creating crazy glitched and cut jungle-style drum patterns, something I would find very hard to do in any other app, which I could then copy and paste into a composition project in an app like GarageBand via the clipboard. Highly recommended!

Mike Watkinson
Mike has been obsessed with music software since he first saw Fairlight's Page-R, and has tracked its development through his work as a performer, composer and producer. As a writer he has contributed articles to Sound On Sound since 1999, and currently writes their Apple Notes column. As well as being a certified Logic Pro and Pro Tools trainer he is also an Apple Distinguished Educator.
Related Videos
Comments (0)

Dream It. Do It.
Do you want to learn Exploring Animoog?
Yes, I want to learn!
No Thanks, I just want to read the article.
Feedback
How are we doing?
We'd love your thoughts, feedback and questions regarding our new site. All feedback is appreciated!
We do not respond to this form! If you need support, please visit our support page.
Thank you for your input!
Your message has been successfully sent
Course Advisor
Don't Know Where To Start?
Ask A Course Advisor