All Articles Logic Pro
Driving Defensively with Logic Pro 9: Workflow Habits to Prevent Problems
Jay Asher on Mon, May 20th 3 comments
Language
If you like the idea that 'prevention is better than the cure' and use Logic Pro, join Jay Asher in this article as he walks you through how to avoid problems before they happen!

This can happen for a number of reasons:

There is little you can do to prevent #3 & #4 other than routine disk maintenance with utilities like Apple's Disk Utility or third party utilities like Disk Warrior and of course, making sure you backup to multiple sources regularly. But you can easily help protect yourself from the first two ruining your day.

These can and do get corrupted. So when your Logic Pro rig is working well, I strongly recommend that you create folder on two backup sources and name it something like 'Logic Working' and copy them to those folders. Frequently, when Logic starts behaving cuckoo for coca puffs simply replacing these files with the working files you backed up will return everything to a good state again.

If your audio interface has a driver, I also suggest you back that up in the same folder. Audio drivers can and do get corrupted, although it does not happen that often and many audio interfaces now are 'class compliant', meaning they do not require a driver.

The good news is that individual projection corruption happens less with Logic Pro 9 than previous versions. My belief is that it is because upon closing Logic Pro, the Undo History is now automatically cleared. Although I cannot prove it and Apple has not officially confirmed it to me, my belief is that the Undo History sometimes got corrupted. However, projects can and do still get corrupted, especially large templates.

When you save a project as a template, it gets saved in your User Library > Application Support > Logic > Project Templates folder. See mine in Pic 2.

Once again, I strongly recommend that you back these up to those same folders. Frequently just swapping them out can cure sudden issues that arise. Chances are, you spent a good deal of time recreating them that you do not wish to have to do again.

In Pic 3, you see that Logic Pro defaults to auto creating 10 backups in the Preferences > General tab's Project Handling. Surely that protects us enough as we work and save, then work some more and save some more, right? 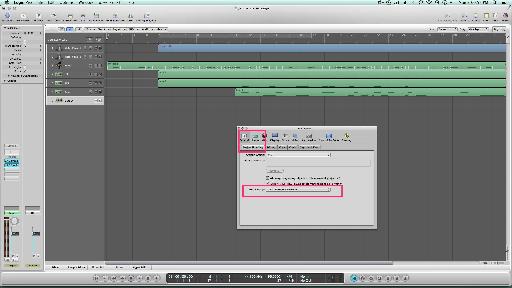 It is not at all unusual for me to have over ten versions. It is only hard drive space and nowadays that is cheap.

There is a secondary benefit to this. In Pic 4, you see that in the Logic Preferences Editing tab, it defaults to 30 undo steps. 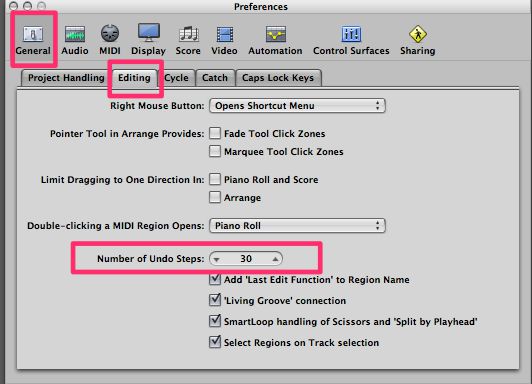 You can increase the number to more, but it affects Logic's efficiency negatively. Regardless, if you have done this a while you no doubt know the feeling of working on a piece of music for a while and saying to yourself, 'Darned it, this was better three hours ago, I really went in the wrong direction with this.'

So you perform your undo steps and discover that you are still not back to where you were when it took its turn for the worse. With my workflow, you can always get back to that earlier version.

Would you rather lose an hour's work or five hours work? An ounce of prevention is worth a pound of cure!

Dream It. Do It.
Do you want to learn Core Logic?
Yes, I want to learn!
No Thanks, I just want to read the article.
Feedback
How are we doing?
We'd love your thoughts, feedback and questions regarding our new site. All feedback is appreciated!
We do not respond to this form! If you need support, please visit our support page.
Thank you for your input!
Your message has been successfully sent
Course Advisor
Don't Know Where To Start?
Ask A Course Advisor