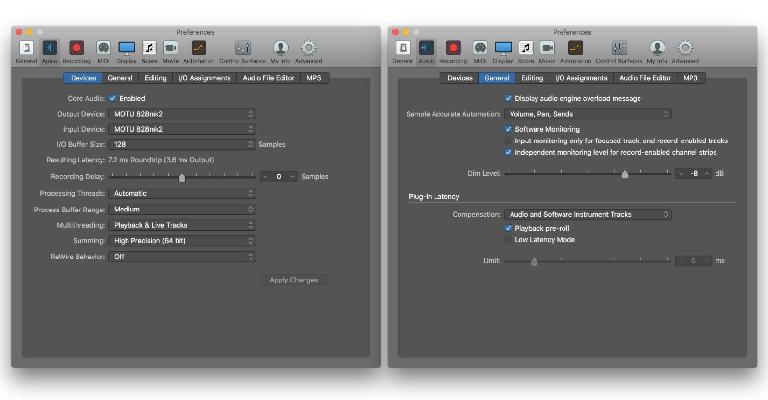 The Devices and General tabs in Audio Preferences

Within the Audio Preferences tab, there are several additional tabs - I’ll be looking (mostly) at just the first two: Devices and General.

The Devices pane in the Audio Preferences window is where you make the settings that relate to the audio interface and other aspects of Logic’s performance as it pertains to computer resources. The first three settings let you enable or disable the Mac OS’s Core Audio driver (which Logic uses for audio i/o), and choose the device you want to use. Logic nicely offers the option to select different hardware devices for input and output, though more typically you’d get your i/o from the same box. 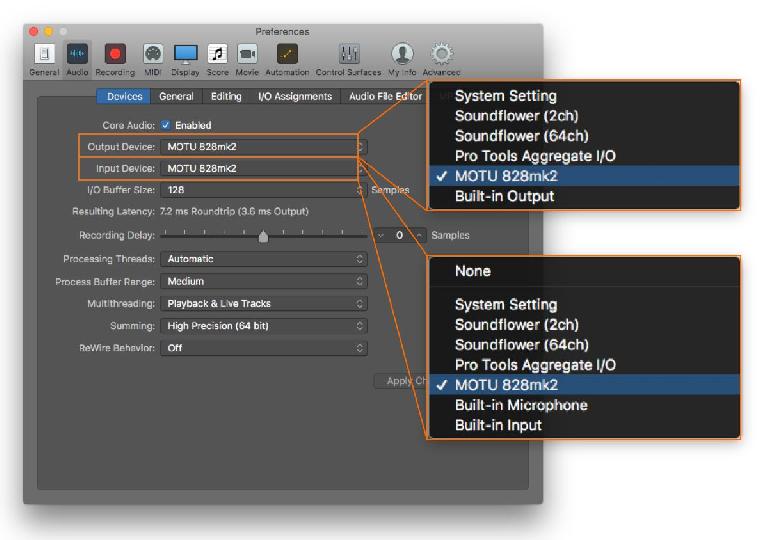 The “Built-In” options refer to the audio i/o on the Mac itself; MOTU 828 is my multichannel audio interface; the Soundflower options reference software for routing audio within the Mac, and an Aggregate is a collection of two or more audio devices grouped together via the OS’s Core Audio settings, which presents as a single larger interface.

The next setting, I/O Buffer Size is probably one of the most familiar adjustments, though still often misunderstood. The i/o (RAM) buffers faciliate the passing of digital audio data into and out of the computer/interface. Larger settings make the overall system more stable and reduce the CPU load, especially with larger projects but introduce a slight delay - latency - when monitoring the audio through the computer/interface. If the Latency is large enough it can be detrimental to musical timing when recording and monitoring. All digital audio i/o has some latency, at least 1-2 milliseconds (by comparison, analog audio has zero latency), but delays below around 8-12 milliseconds or so are usually not noticeable or problematic. However, the larger I/O Buffer Size settings may introuce considerably more than that. Smaller settings result in less latency but may put more of a strain on the CPU and other computer resources, resulting in anything from light clicks and pops to stuttering and playback interruptions.

The I/O Buffer Size is a user-adjustable setting because the user must determine the setting that offers the best balance between stability and desirable low latency. The “Resulting Latency” display shows just how much latency you’ll be dealing with at the chosen setting. Roundtrip means both input and output latency - what you’ll feel if you’re playing/recording and monitoring the audio through Logic. 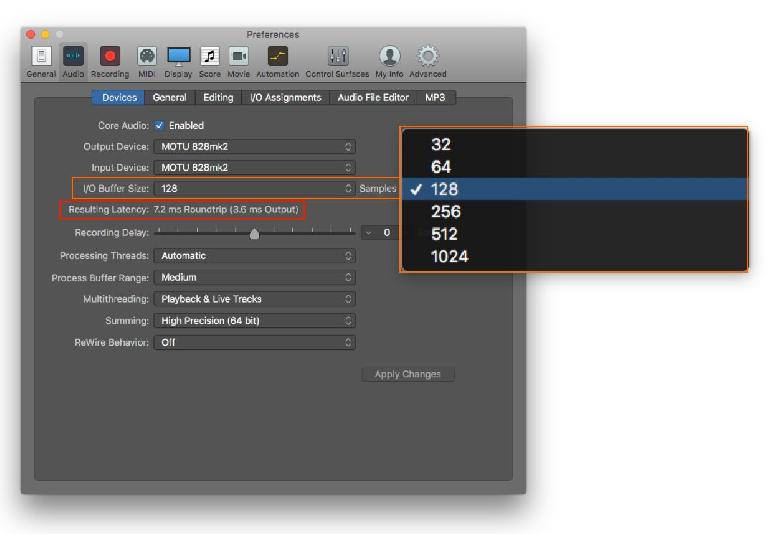 In Fig. 3, you can see that a Buffer Size of 128 Samples  (at this session’s 44.1kHz Sample Rate) corresponds to 7.2 milliseconds latency. If you’re just playing back audio, it’ll only be subject to half that latency. Other Buffer Settings will double or halve the latency as you move from one to the next. (Please Note: there will be at least a few ms additional latency above this figure).

In a perfect world, you’d just set the lowest Buffer Size (32 Samples, here), for the barest minimum latency, and if you have a top modern high-end Mac with fast connections and drives, you may be able to do just that. But if your computer resources are less robust, you may need to settle on a lower setting. Some people switch the Buffer Size between recording (lower) and mixing (higher, when the extra latency isn’t a problem). With my current Mac and older interface, I set a 128 millisecond Buffer - as a player, I find the latency that accompanies higher settings to be too much for me, but, as they say, your mileage may vary.

The big “Recording Delay” slider may be prominent, but it’s usually best left alone - it’s really there to compensate for an interface’s audio driver that causes the recorded audio to be positioned a little off-time (later or earlier than it was actually played) when the recording is done. Normally, this shouldn’t happen, but if it does occur, you can compensate here.

The next few settings relate to how computer resources will be managed. Processing Threads relates to the number of Cores both real and virtual of the host Mac’s CPU. It normally defaults to the maximum number, to utilize all the CPU’s processing power, but if this occasionally results in issues you can try lower settings here to see if some other option stabilizes the system.

Process Buffer refers to another software buffer used for calculating data in mixing and effects. There’s no real “best setting” - the default is Medium. Theoretically, more powerful systems could utilize the Small setting, less-powerful ones the Large setting, but in practice, if you feel like you’re pushing at your system’s limits, you can experiment and see if another option offer better performance.

Multithreading refers to how Logic allocates different tasks (like different channel strips) to different Cores in today’s typical multicore CPUs. Traditionally, in some situations like when an Audio or Instrument track is record-armed, or “live”, all the effects on that channel strip are handled by the same Core, which often overloads even when others are barely working - this is frequently the case with certain third-party intruments, for example. This won’t really solve that particular issue, but the new “Playback & Live Tracks” option is an attempt to offer some improvement in Core handling in that type of situation. If it doesn’t cause instability in your system, I’d leave it on, but if you are having issues, try the older “Playback Tracks” behavior.

New to Logic 10.3 is the choice for a 64-bit summing engine - previously the only option was the standard 32-bit engine. I won’t get into the various arguments about the audible significance of 64-bit summing vs 32-bit summing; suffice it to say it provides a higher internal resolution, with little or no noticeable significant increase in processing overhead, so I’ve been leaving it on.

Finally, if you use the older ReWire protocol to route audio to/from another audio application, you can choose the appropriate option for live vs playback-only situations.

The Audio Preferences’ General tab provides some settings for aspects of internal operation. 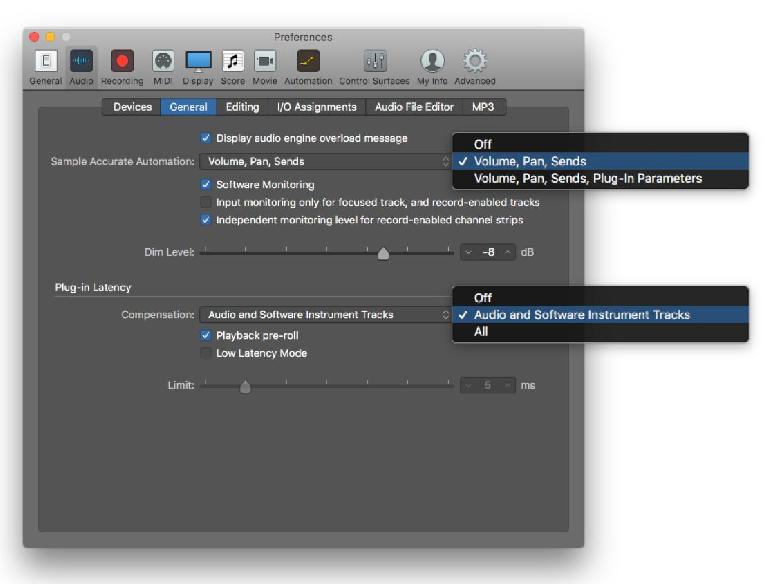 At the bottom, there are additional latency-related options, but this time they address Plug-In Latency - the extra latency introduced only within a particular channel strip by some plug-ins. Except for the Mastering processors (Multipressor, AdLimiter) most of Logic’s built-in plug-ins don’t introduce additional latency but some third-party plug-ins do. Logic can compensate for this automatically, but you have to select the right option based on your current activity, otherwise the compensation might introduce other timing issues.

If you’re just playing back or mixing, you can choose “All”, and Logic will compensate for all latency-inducing plug-ins, even ones in Auxes and the Stereo Output channel strip. But if you’re still recording, the method of compensation employed by the “All” option could cause other timing problems. So for live playing/recording scenarios, you need to choose “Audio and Software Instrument Tracks” instead.

This utilizes a different approach, one that will preserve proper timing as new recordings are added to the project, but it can’t compensate for latency-inducing plug-ins in, say, a reverb Aux or the like  - though I’ve never found that particularly problematic. But when you’re bouncing down to the final stereo audio file, you should enable “All”, especially if you’re using dedicated mastering effects, otherwise you might end up with a latency-induced gap at the beginning of your bounced audio files.

Logic also has a feature where you can have it automatically disable latency-inducing plug-ins in live playing situations, letting you avoid having to make adjustments constantly by hand. When “Low-Latency Mode” is enabled, the Limit slider sets how much latency will be tolerated before a plug-in is disabled when the track is “live”. And the Playback pre-roll option starts playback just a hair early, making sure you don’t miss hearing the initial transient of the first note played due to latency/compensation.

Up at the top of the General pane are a few more settings. You can enable or disable an overload warning message, and set how accurate the timing of Automation data will be - you can make it sample-accurate for just the main functions (Volume, Pan, Sends), or for all internal plug-in parameters as well (Volume, Pan, Sends, Plug-In Parameters). The latter option is considerably more processor-intensive, so unless you’re experiencing sloppy timing of automated effect parameters you could leave the simpler setting on.

The last three settings relate to audio monitoring. Software Monitoring needs to be on to listen to incoming audio through Logic’s mixer. This is normal operation, but it comes with two caveats. Make sure to not inadvertantly monitor the signal in parallel in the analog domain - whatever latency the software-monitored signal has may phase unpleasantly againt the zero-latency analog signal. If you want to monitor in the analog domain, for true zero-latency, you could turn off Software Monitoring, but then hear no effects during recording, and no Virtual Instruments. I’d usually leave it on.

“Independent monitoring level for for record-enabled channel strips” is a nice convenience feature that I use. When this option is on, as soon as you record arm an Audio track, the Channel Fader level can be set independently of the level it was set at for playback. When you disarm the track, the fader returns to its previous playback level. This lets you conveniently set a different level for the player but then as soon as the recording is done, the normal playback level returns and the Fader jumps back to the non-armed track playback level previously set.

Finally, “Input monitoring only for focused track, and record-enabled tracks” allows for input monitoring only of tracks that are either selected or manually record armed.  I think the idea is to automatically enable monitoring as you switch tracks, as a convenience, and it’s on by default but if you find you need more flexibility in enabling monitoring then you might choose to do as I do and disable it, and handle monitoring by hand.

There’s just one more quick area I want to refer to. Logic recently moved a setting - the “24-bit Recording” checkbox - to a different pane; it’s now in the Recording Preference pane. This is kind of a throwback - 24-bit audio is the standard, just turn it on and leave it on. 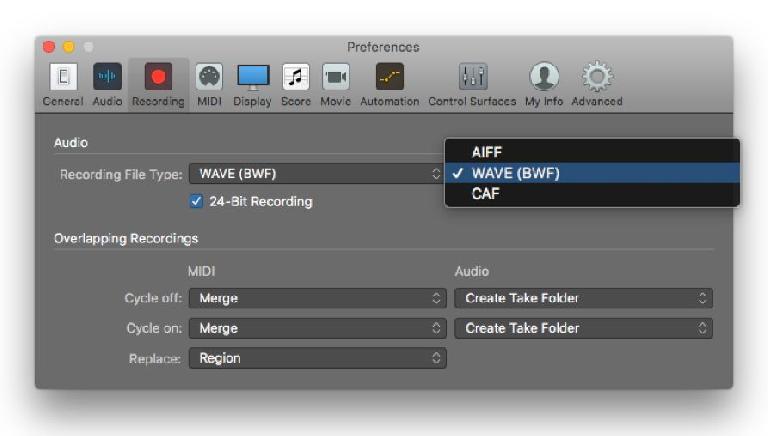 The other audio-related setting in this pane is the Recording File Type menu. In the old days, AIFF was  a Mac format, and WAV was a PC format, but now WAV - or more specifiaclly, Broadcast WAV (B-WAV, or BWF) - is the universal standard for pro audio, so that’s what I’d select here. However, if you’re doing something like archival recording, and you need to record audio files larger than 4 gigabytes, you’d have to use Apple’s CAF format.

And those are Logic’s Audio Preferences. Hopefully this article has been somewhat helpful in explaining these options, when setup time rolls around.

Dream It. Do It.
Do you want to learn What's New in Logic Pro X 10.3?
Yes, I want to learn!
No Thanks, I just want to read the article.
Feedback
How are we doing?
We'd love your thoughts, feedback and questions regarding our new site. All feedback is appreciated!
We do not respond to this form! If you need support, please visit our support page.
Thank you for your input!
Your message has been successfully sent
Course Advisor
Don't Know Where To Start?
Ask A Course Advisor