All Articles Logic Pro
Quantization Tips in Logic - Part 1
Toby Pitman on Fri, April 29th 5 comments
Language
Over the coming weeks I'm going to go over some of Logic Pro's quantizing features and hopefully shed some light on some of the more advanced aspects of these powerful time correction tools. Logic's f

Over the coming weeks I'm going to go over some of Logic Pro's quantizing features and hopefully shed some light on some of the more advanced aspects of these powerful time correction tools.

Logic's feature set allows you to do so much more with timing issues than just brick wall quantization. It can be as subtle or as in your face as you like.

These tools should always be used to compliment or enhance a performance - not suck all the life from it. In these tips I'm mainly going to deal with the Region parameters as I think they give you the most flexibility.

Let's start at the top and look at the values you can actually quantize with!

I'm sure you are all familiar with the Quantize list in Logic but I bet there are some values in it that you never look at. If this is the case then here's what they do!

The smallest value you can set in note length. A triplet Quasihemidemisemiquaver. Try playing that, or even saying it!! So small it's rarely ever seen in music! For this reason it's not much use as a quantize value!

These quantize options are incredibly useful as they are able to deal with passages that contain notes that fall on both both straight and triplet beat divisions.

In any given musical piece your note values won't always be just straight values like 1/2, 1/4, 1/8, 1/16 etc. Some phrases may contain triplet values as well like 1/3, 1/6, 1/12. Which one you choose will depend on the smallest timing values of the content.

Tuplets are irregular beat divisions that are played inside a regular beat duration.  A really good example of this is the Septuplet. You'll see this in the quantize list as '7-Tuplet' and it's basically where you squeeze 7 notes inside the space of 4.

This grouping is pretty common in Classical music and even Disco/Funk string arrangements where a diatonic (7 note scale) is played inside the last beat of a bar, the downbeat of the next bar being the octave of the scale.

The next set of values are for Swing. Swing is kind of a hard thing to define musically, especially with notation. Swing settings come in 8th and 16th note varieties. 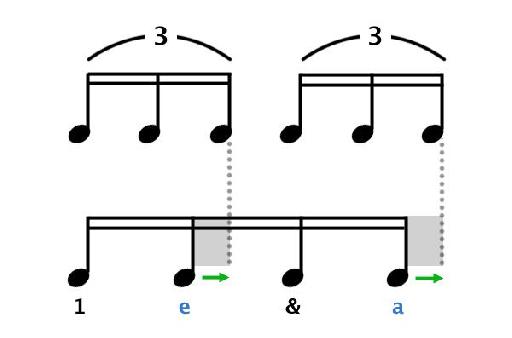 Because you can choose how far you want to push (or 'Swing') these notes, 'Swing' is often applied in terms of strength. In Logics case A - F (A being subtle, F being strong). In many other sequencers this is done by percentage (think MPC!).

Here are two loops. The first is quantized to straight 1/16 notes.

Here's the same loop with 'Swing 16th D' applied to it. I guess the best way to verbally describe it would be that it has more 'bounce' to it!

The last values are your basic bar divisions. Quarter notes, Eighth notes etc. These are your general purpose settings that you'll use the most.

Of course you can always restore your unquantized values by choosing 'Off' from the Region Parameter drop down. This will give you Logics maximum timing resolution of 3840 ppqn (Pulses Per Quarter Note).

If you wish to make any of your quantize settings permanent you can always select the Region and go to MIDI > Region Parameters > Apply Quantize Settings Destructively from the local Arrange menu.

That's a whole other ball game! Stay tuned to the macProVideo Hub for more on this...and check out the Logic 101 and Logic 201 tutorials to super-charge your Logic Quantization knowledge!

Toby Pitman
For the past 20 years Toby has worked as a professional guitarist, programmer and producer. Clients include Sir Paul McCartney, George Michael, Shirley Bassey, Yusuf Islam, Giles Martin as well as the London 2012 Olympic Ceremonies. He has also worked extensively in TV, Advertising and Film. As well as composing himself he has also worked alongside many composers like David Arnold, Clint Mansell and Simon Franglen on many major film releases. An expert in synthesis and sound design Toby has also lectured for Apple on their Logic Pro music software which he has used since its days on the Atari. He has also worked as an educator for the International Guitar Foundation and the Brighton Institute of Modern Music teaching guitar. In his spare time (of which there is very little) he moonlights as a motion graphics artist specialising in Cinema 4D and After Effects.
Related Videos
Comments (5)