All Articles Native Instruments
6 Essential Tips for NI Battery 4
Toby Pitman on Wed, September 11th 0 comments
Language
Battery 4 has seen a major overhaul with a new refined interface and loads of new features. Get the most out of this drum sampler powerhouse with Toby Pitman's essential tips.

Battery 4 is upon us. This release has seen a major overhaul for the advanced drum sampler with a new refined interface and loads of new features. Here's a couple of tips and tricks for Battery 4 that cover some new features.

You've just updated to Battery 4 from Battery 3. So where the hell is the Battery 3 library then? Well, it doesn't appear in Battery 4's Library section. Now, there's no quick and easy way to bring B3 kits into the Library browser of Battery 4 (which includes the new Tag system and a new file extension for kits). You '˜can' import the Battery 3 folder in the Library via Preferences, but it will only add Battery 3's raw audio material into the User section of the Library browser.

The best thing to do is just take the hit and approach this from a different angle. Instead, go to the Files tab and locate your '˜Battery 3' folder. Control-click/right-click on the folder and choose '˜Add to Favorites'. 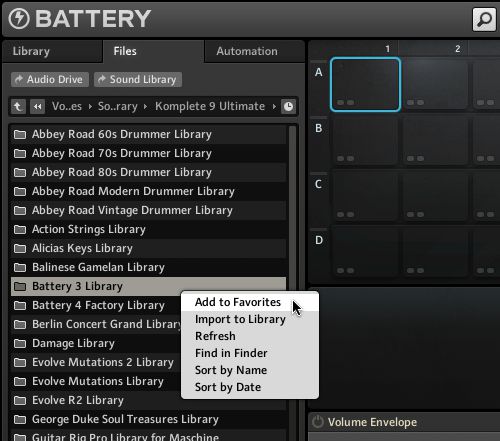 This folder will now show up as a shortcut button in the Browser. 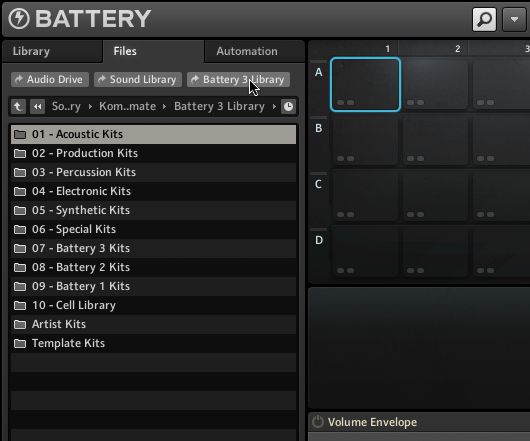 You can now easily browse the folder for all your favorite Battery 3 kits!

So Cell rendering is new in Battery 4. This allows you to effectively bounce a processed cell to disk. This can be very cool if your the sort of person that likes to build custom libraries and Battery certainly has the sound sculpting tools for creating new and interesting sounds. Now here's something you need to watch out for when Cell Rendering!

In Preferences, you'll find the Cell Rendering settings. Here you can set your sample rate and format for the render. Unfortunately, there's no option to set a custom path which would be handy. In the MIDI settings part, you'll see an option called Note Length. The highest setting is a Whole Note. This can be a gotcha! 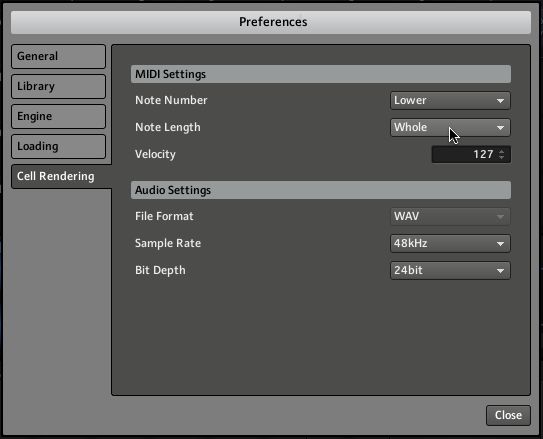 Now if you've made a sample that's quite long and you've used the ADSR volume envelope, then the Sustain portion will only last a Whole Note (one beat) of the BPM that Battery is using as its clock. This means your rendered file may come out shorter than you'd like! 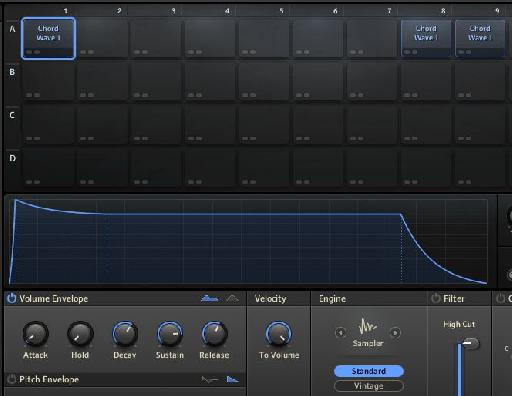 When rendering, turn off the volume envelope to capture the whole sample! Once rendered, you can activate the envelope which retains its settings.

Pro Tip: Rename the Cell before you render to write the name to the rendered file. Also make a duplicate backup Cell because there's no undo!!! 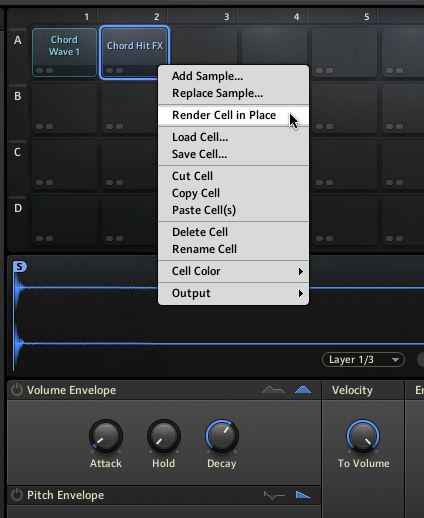 Below you can see the difference in file length between the top file (with envelope) and the bottom file (without).

Here's the sample without the envelope: 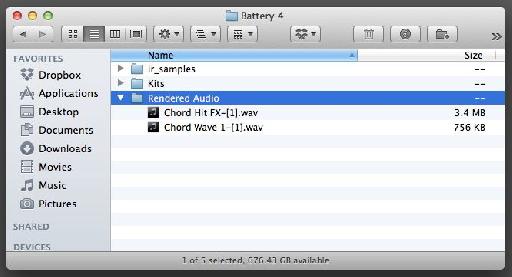 When you load a sample that contains tempo and slice information (i.e. a REX file, Acidized WAV or an Apple Loop) then Battery 4 will enter Beat mode. This allows Battery to tempo sync these loops and even map individual slices to cells.

Before you proceed, you should uncheck the default '˜Expand Loop Slices to Individual Cells' in the Loading preferences. This will allow you to enclose a sliced loop like a REX file in a single cell. 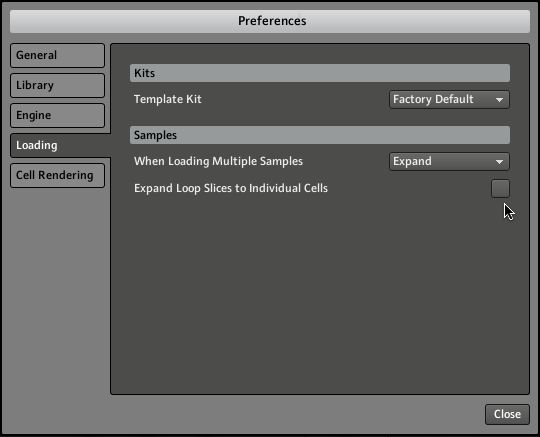 Just navigate to a REX file or Apple Loop and drag it onto the Cell. Below you can see Beat mode is selected in the Engine section. 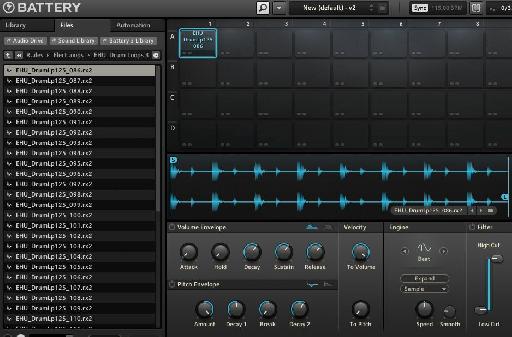 This opens up Battery 4 in a big way!! It now becomes a powerful loop playback engine in the realm of something like Stylus RMX. Any capable loops are perfectly beat-matched! It makes it a breeze to create many sonic variations on a loop too by loading the same one into multiple cells and processing differently! 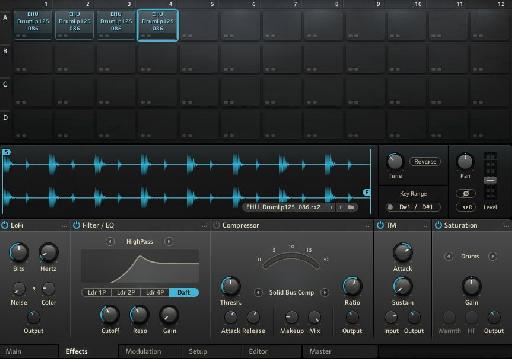 You can of course split the loop slices out onto Cells by pressing Expand in the playback engine section. 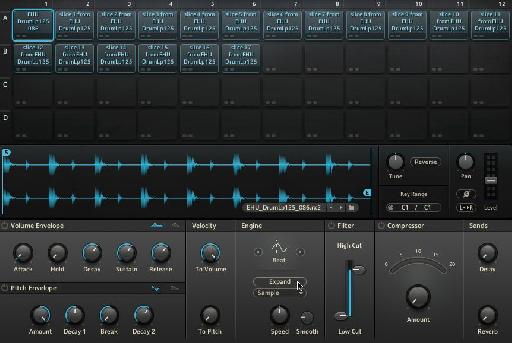 While there's no MIDI file support, it's a great start!! Game changer!!

Articulations aren't new to Battery 4 but they are cool. They can also take some work out of MIDI programming. They basically emulate drum rudiments like ruffs, drags, flams, rolls and some extra effect based things.

Here I have a Cell that has a a bunch of velocity layers of a snare. 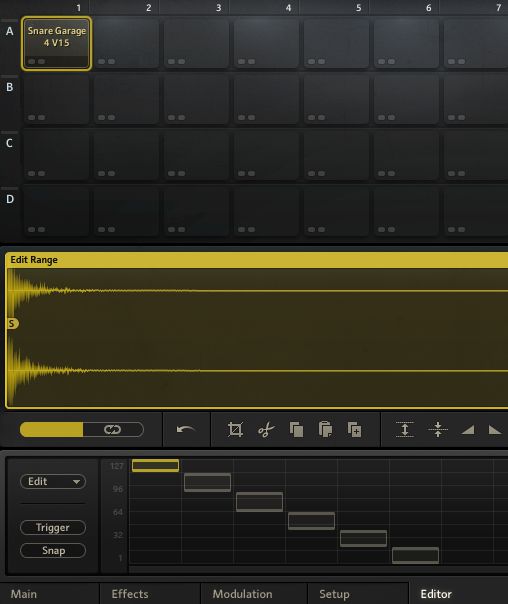 If I just copy this Cell and Paste it to a bunch of other Cells, I can set up a different Articulation for each Cell. This gives me a bunch of easy to play articulations. The bonus is they are dynamic and will trigger the velocity layers giving a fairly realistic result! 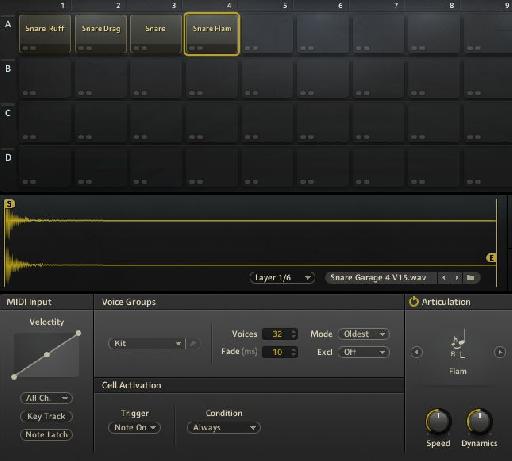 Oddly, they also (well some of them) work on all REX file slices when playing a loop of a single Cell. Try it. Of course you can get some great effects on non-drum material too!!

Round Robins eliminate the machine gun effect produced by re-triggering the same sample in rapid succession. You'll find some great real snares in Battery 4 taken from popular Kontakt drum libraries. Most will have up to three Round Robin samples for the hardest velocity layer. I've loaded three such samples to three different Cells.

If I select all the Cells and click the MIDI icon in the Key Range box and hit a note twice, it will map them all to that note. 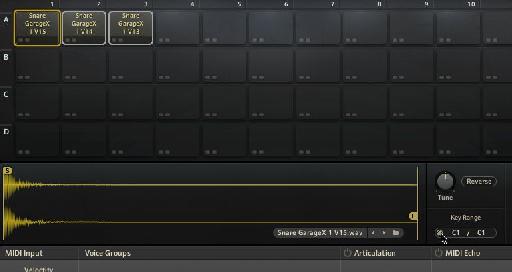 Then with all Cells still selected I'll choose Cycle Round Robin in the Condition drop-down in the Cell Activation panel. 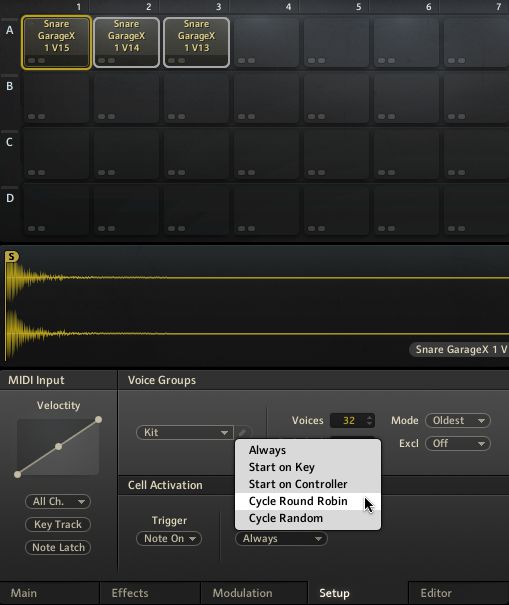 Now all I need to do is set a Cycle Position for each Cell in the Position box (bottom right). 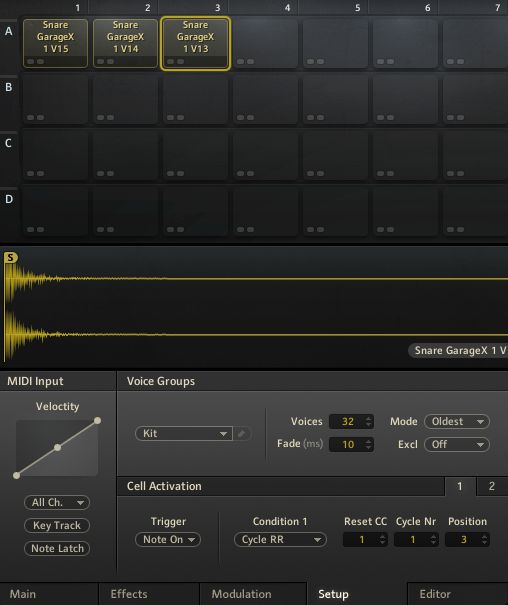 If I play the note, I get a machine gun free snare as the Cells cycle on each hit. Nice!!!

Don't just limit yourself to drums in Battery 4. There's plenty of scope for melodic loops and samples. I got some really interesting results by loading raw synth waveforms into Cells and time-stretching them beyond recognition with a MIDI controller... All through some Lo-Fi and Saturation effects of course!!!

Dream It. Do It.
Do you want to learn Battery 4 Detonated?
Yes, I want to learn!
No Thanks, I just want to read the article.
Feedback
How are we doing?
We'd love your thoughts, feedback and questions regarding our new site. All feedback is appreciated!
We do not respond to this form! If you need support, please visit our support page.
Thank you for your input!
Your message has been successfully sent
Course Advisor
Don't Know Where To Start?
Ask A Course Advisor