Massive is known as the go-to synth for creating aggressive sounds. But in this chapter, we will explore the mellower side of Massive by creating a very dark and ambient pad, that should sit well in the background of a mix, yet have enough presence to be noticeable.

As usual we will start from scratch by going to File > New Sound.

For OSC1, we will assign a wavetable called Classic. It has some upper harmonic content with an organ-type timbre and reminds me a little of some of the sounds heard on the Roland Juno-60/106 synths.

Turn down the Wt-Position to about 11 o'clock. This makes the timbre a lot darker which will work great for the pad sound we are trying to create. We will combine this with OSC2 set to the Disto wavetable which sounds a lot like a sawtooth wavetable sampled from an analog synth. Set its Wt-Position also to about 11 o'clock, as it has a similar effect on the timbre. To create some detune interaction between the two oscillators, let's set the Pitch of OSC1 to 0.04. Lastly, let's also set the F1-F2 crossfader all the way to F1 (as we will only be using FILTER 1). 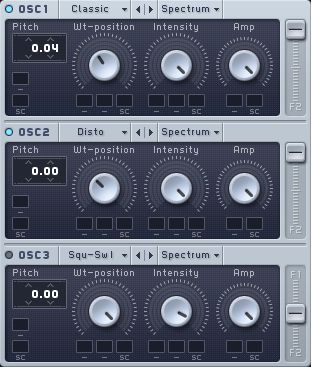 Load up the Daft filter in FILTER 1. This is one of the more resonant filters in Massive, and we will be highlighting this particular feature in the sound design.

Set the Cutoff to slightly below 12 o'clock and the Resonance to slightly above 12 o'clock. This is quite a high value for the Resonance control, and if you modulate the Cutoff knob you will hear the feedback-type resonance that this filter adds to the sound. More on that later'¦ For now just leave the parameters as indicated in the following picture. 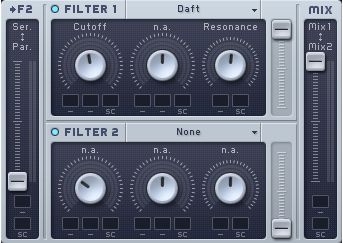 The amplitude envelope needs to be significantly different from the default settings. To emulate a pad sound we will need a long attack and a relatively long release. Turn down the Level and Attack dials to their lowest value, then set the Decay and Release dials to about 2 o'clock.

As long as the Linear option is turned OFF, you should get a nice logarithmic curve on the decay parameter which works as the attack in this scenario. Have a look at the following picture for more accurate parameter values.

We want this patch to remain polyphonic, but we can still push up the number of Unisono voices to 2 (under the Voicing tab). You can also raise the Max voices to 24 since this patch will be used for chords. This may seem like too high a value but when the Amp Envelope has a long release, the voices will still be used despite keys being released. This may lead to a lot of voices being used up even while not playing too many notes.

Our sound is getting close to what we are trying to achieve, except that it's quite static. It's time to introduce some movement by modulating the Cutoff parameter of FILTER 1 with a very slow moving LFO. Click on 5 LFO and make sure it's set to a sine wavetable. Also ensure that the XFade Curve is set to the sine wavetable only. Set the rate to slightly over 9 o'clock which will result in a very slow LFO.

Now click and drag on the crosshair next to 5 LFO and drop it on the modulation slot just below the Cutoff parameter for FILTER 1. Set the modulation arc range to about a quarter of its range. We don't want too much modulation, just a subtle movement which will make the patch less static and boring. Since the filter Resonance is quite high, even a subtle movement of the Cutoff parameter will be noticeable. 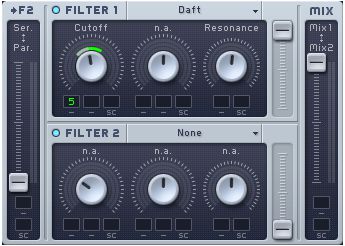 Now for the final steps we shall add some reverb & chorus to taste, and EQ the sound a bit to bring out some of the mid frequencies to further enhance the filter modulation. Select the Reverb module in FX1. We are going for a fairly large sound so the Size and Density parameters are going to be quite high, but at the same time we don't want the sound to be washed in reverb so the Dry/Wet parameter needs to be set relatively low. Refer to the following picture for the exact settings.

In the FX2 slot add the Chorus module. It is common to add the chorus before the reverb, but in this case I suggest doing the opposite. This will affect the sound as the signal flow FX1 comes first, then FX2. In this scenario, the chorus will be applied to the reverberated sound which I felt sounded more interesting than the other way around. This will clearly accentuate the chorusing more so be careful not to overdo it.

Finally, set the EQ module to boost the mid frequencies quite significantly. This will enhance the filter modulation that is already present in the sound. Also bring down the high frequencies just a tad with the High Shelf just to compensate for any brightness that might have been introduced due to the processing or the filter's resonance.

While playing block chords in the low register, I did notice some unwanted low frequency build up so I would suggest bringing down the lows with the Low Shelf, but only if needed. Cutting out the lows too much will make the higher notes a bit too thin sounding. Refer to the following picture for the EQ settings.