If you listen to Stevie Wonder's '˜Superstition', you will hear the original Hohner Clavinet C being used for the main riff in the song. I think a lot of funk musicians really liked the sound of the Clavinet as it sounds very similar to an electric guitar, especially if a wah-wah effect is added on it. I suppose we could simulate the clavinet sound using a guitar, but for those of use who don't own one, let's see how it can be emulated in Massive. This may not lead to a sound that will be indistinguishable from a real clavinet, but we can come quite close and in the process, build some really good synthesis chops.

As usual we will start from scratch by selecting File > New Sound. We will use two oscillators for this patch, both set to the Pulse-Saw PWM wavetable. Set both the Pls-Saw Pos to the pulse wave(hard left) and set the Pulse Width to slightly above the lowest value. This is actually the tricky part. We are trying to get a thin sound and we want both the oscillators to have a similar pulse width. I found that somewhere between 7 & 8 o'clock was working best. Too close to 7 o'clock and it sounds too thin, too close to 8 o'clock and it's just not thin enough. Have a listen to the audio to get a better idea and also take a look at figure 1. Let's create a slight detuning effect by setting the Pitch of OSC1 to 0.04. We are planning on using just one filter so let's also set the F1-F2 crossfader to only feed FILTER 1. Leave the Amp of both oscillators at their highest value. 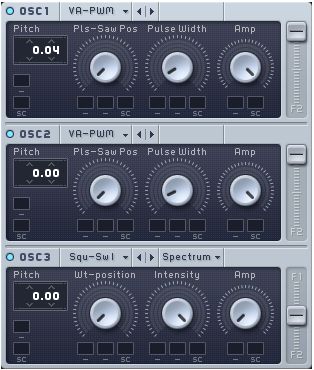 For FILTER 1 we will go with a standard 12 dB/oct lowpass filter, which will be the Lowpass 2 in the filter drop-down list. Set the Cutoff to about 11 o'clock and Resonance to its lowest value. We will be using an envelope to modulate the Cutoff parameter of this filter so don't worry about getting the parameter exact yet, but have a look at figure 2 and get it in the ballpark. 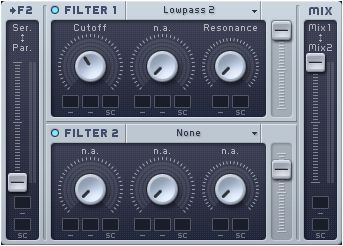 Before we move further, try opening up the filter a little bit more and you will end up with the starting point for a pretty decent sounding electric piano. A lot of times, while designing one sound, you may stumble upon other interesting sounds. It's always a good idea to save these patches separately to get back to later for further explorations.

Since we are going for a piano type sound, the amplitude envelope should reflect that. So, an envelope with no attack, long decay, no sustain and very little release would be ideal. As we already know 4 Env is the default amplitude envelope so make the necessary changes to that. Check figure 3 for the exact parameters.

We also need to set up the filter envelope and for this purpose we will use 1Env. We need the envelope to modulate the Cutoff of the filter in such a way that it starts from the highest value and gradually settles down to the value currently set, which is at around 11 o'clock. The time it takes to settle down to the current value will be adjusted using the Decay parameter of 1 Env. For the exact settings of this envelope refer to figure 4. You will notice that these envelope settings are quite similar to the amplitude envelope except for the decay & release parameter.

To set up the modulation, let's drag the crosshair next to 1Env and drop it on the leftmost modulation slot just below the Cutoff parameter in FILTER 1. Alternatively you can even right-click on the modulation slot and choose 1 under the Modulations category. Now, click and drag on the modulation slot until you see the blue arc covering the right side of the dial. The envelope will modulate the sound starting from the knob's value indicator, to the value at which the arc ends, in this case we are making sure the arc ends right at the highest value of the knob. Since we have set a very fast attack, the Cutoff will jump to the highest value and since we have a relatively long decay, it will gradually modulate to the currently set position. I found the decay parameter to work even at slightly lower settings than indicated in figure 4, though lower decay values will lead to a very percussive sound that will not sustain much. It's more of a matter of taste so set it to a value that works best for you. 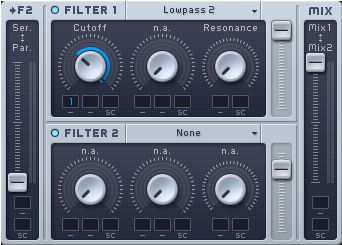 One of the more unique aspects of Massive is the inclusion of a Feedback module. As the name suggests it provides a way to re-introduce a portion of the signal back into its input path creating a feedback loop. When used in a subtle way, the feedback module can create a low end boost which will definitely help this sound we are creating. To see where exactly the feedback path is brought back from, open the ROUTING tab. This area shows exactly how audio is routed through the various modules in Massive. You will see a few different objects named FB. When one of these objects is lit up, that is where the feedback input will be sourced from. Let's feedback the signal from after FILTER 1 by clicking on the FB object in the top-middle area as shown in figure 6.

Now ensure the Feedback module is turned on in the main interface of Massive by making sure the blue LED next to the module's name is lit. Also make sure that the F1-F2 crossfader is set all the way to F1 as we are only using one filter in this patch. Set the feedback amount to about 9 o'clock. You should hear a subtle low end boost especially while playing the higher notes.

As usual we will wrap this up with some effects and EQ. I've added the Tele Tube distortion module in FX1, which fattens up the sound a bit. The Drive and Dry/Wet parameters are quite high at approximately 10 & 11 o'clock respectively. Refer to figure 8 for more accurate parameter settings.

I've added a Chorus module in the FX2 slot but this is completely optional. The clavinet usually doesn't need chorusing but depending on taste you can choose to add it. You will notice from the settings that it is very subtle and doesn't change the sound too much.

Lastly, in the EQ module, reduce the low frequencies a bit by bringing down the Low Shelf to just below 12 o'clock. Increase some of the mid frequencies to exaggerate that nasal tone. Also boost the high frequencies by pushing up the High Shelf to roughly 2 o'clock. Refer to figure 5-10 for exact settings.

Dream It. Do It.
Do you want to learn Massive: Dubstep Sound Design?
Yes, I want to learn!
No Thanks, I just want to read the article.
Feedback
How are we doing?
We'd love your thoughts, feedback and questions regarding our new site. All feedback is appreciated!
We do not respond to this form! If you need support, please visit our support page.
Thank you for your input!
Your message has been successfully sent
Course Advisor
Don't Know Where To Start?
Ask A Course Advisor