All Articles Native Instruments
Using Absynth as an Effect to Process Audio
Gary Hiebner on Fri, September 23rd 0 comments
Language
Most Absynth users are so blown away with its capabilities as a software instrument that they pass over using it as a powerful effects processor! Gary Hiebner explores the other side of Absynth.

Absynth is a great synthesizer tool. With its oscillators, effects, envelopes and LFOs, one can create organic soundscapes through to complex pads with evolving timbres. One thing you may not be aware of is that you can also use Absynth as an effects processor for your audio channels. This opens up a whole new bag of tricks for you to process your audio with. It allows you to use Absynth's brilliant oscillators, filters, effects and envelopes as manipulators for your audio files. Here is how to use Abysnth as an audio effect in Logic. It can be applied the same way in other DAWs.

I have added the Apple Drum Loop '˜Hip Hop Riding Beat' to an audio channel, and then inserted Absynth as an insert plugin on the channel. (Audio Unit > Native Instruments > Absynth FX > Stereo). Any audio on this channel will now be passed through Absynth's oscillators, effects, envelopes and LFO's. This opens up many processing opportunities from one plugin.

Absynth's filters are top class and have an organic flavor to them. You can add color to your audio tracks that may be difficult to match with other plugins. Here I've used the Absynth "Follow the Mailman' preset. This preset uses 3 oscillators with different filter types on each oscillator. This is passed through the Waveshape filter section that processes it through a sine wave. It is then passed through a High Pass Filter, and then finally through a Multi-comb delay effect. LFOs have also been applied, adding some movement to the sound source. 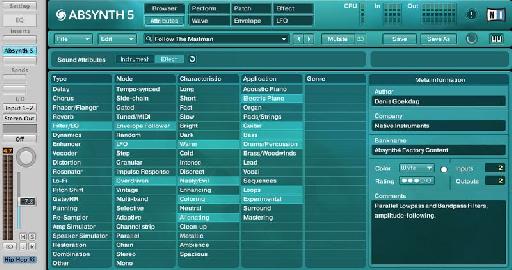 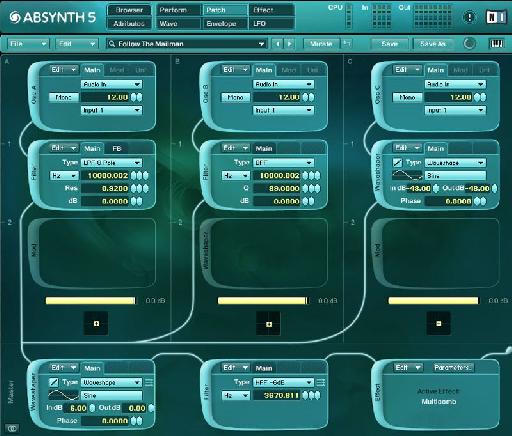 And here is it after it has been processed with Absynth:

You can hear from the processed drum loop this effect is a bit overwhelming.

You may find at times that you would like to retain your original, unprocessed audio and only apply some of Absynth's effects to your audio source. The best way to do this is to use Absynth as a send effect.

This brings another playing field for audio processing; imagine the possibilities! Using Absynth as an audio processor you can create audio sources, which may sound like they are from another planet!

If you wish to get some more understanding on Native Instruments' Absynth check out the following tutorial for more in-depth information on this powerful synth: