All Articles Logic Pro
Working With Multi-Timbral Soft Synths in Logic Pro
Toby Pitman on Sat, May 21st 5 comments
Language
Rather than run multiple instances of a virtual instrument to access multiple sounds learn how to use them in multi-timbral mode. Toby Pitman unravels the mystery behind how to set these up in Logic.

Multi-Timbral soft synths are an important part of everyone's sonic arsenal and I'm sure everyone reading this will have at least one multi-timbral software instrument like Omnisphere, Kontakt or Play.

In Logic there are many ways to access the individual channels of these instruments and in this article I'll be looking at some different solutions for using multi-timbral soft synths.

Logic's '˜Multi Instrument' environment object was designed for use with external multi-timbral hardware synth workstations like the Roland JV-1080 or Korg Wavestation.

The idea behind it was to access 16 discrete MIDI channels in one environment object which would then be connected to a port on a hardware MIDI interface from Logic (via the '˜Port' drop down list in the Parameters box). The port you selected on the hardware interface was then connected to the synth with a MIDI cable (remember them?) and you were good to go.

The idea was you had a template with a load of Multi Instruments that matched your studio's hardware synth setup.

This object was a lot more streamlined than having to create 16 '˜Instrument' objects and assign their MIDI channel and Port value individually. To this day the Multi Instrument is still the best way in Logic to use an external hardware multi-timbral synth.

So when multi-timbral '˜Soft Synths' started to emerge the only real solution in Logic to address their multiple MIDI channels internally was to wire up a '˜Multi Instrument' object to the Software Instrument '˜channel strip' inside the environment. All you had to do was make sure the MIDI channel on the Channel Strip was set to '˜All' so it could receive all 16 MIDI channels from the Multi Instrument.

You would then create the tracks for the Multi Instrument in the Arrange page and off you went. 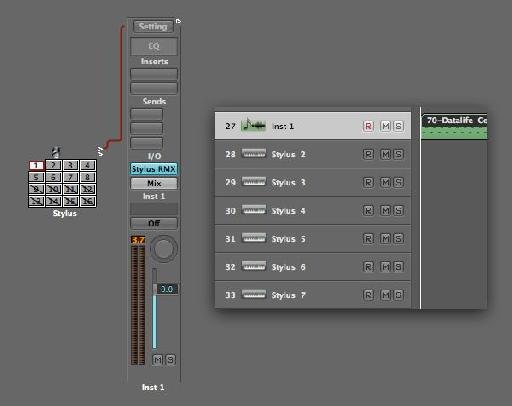 ï¿¼Now this object was never really intended for internal use, mainly because there were no soft synths in existence when '˜Logic' came into being in 1993! Let's not forget that VSTi didn't even appear until 1999 and the first multi-timbral soft synth I can think of was Kontakt which appeared in 2002.
One tell tale sign of this not being its intended use is the warning sign you get when you connect a Multi Instrument to a Channel Strip. 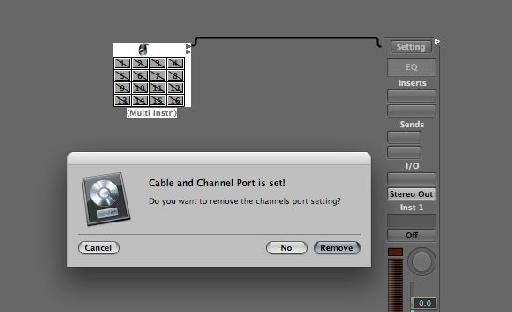 I'm sure you've all seen this warning. The idea of this is to let you know that by default the Multi Instrument wants to connect to the outside world via a Port. You can see all the available Ports I have in the image below. I managed to dig out an Emagic MT4 for effect! 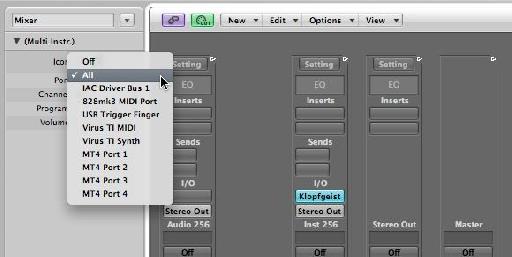 By default the Multi Instrument will connect itself to '˜all' those Ports on creation. Removing the Port settings ensures that any MIDI you pipe through the Multi Instrument can't escape Logic into the outside world.
Although the Multi Instrument works well internally it's a a pain to set up especially if you like starting from a blank slate. There's also the issue of MIDI CC7 (Volume) not being able to control the levels of each part in your synth, as no matter what channel you send this message on it always ends up controlling the overall channel strip volume fader! So not perfect!

The Death of the Multi Instrument?

Now up until Logic 8 this was your only real option for using multi-timbral soft synths in Logic. Then Apple had a bright idea!
Inside the '˜New Tracks' dialogue box a small checkbox appears when you select 'Software Instrument'. The checkbox is marked '˜Multi-timbral'.

It is now possible to create multiple copies (between 1-16 in the dialogue box) of your Software Instrument track in the Arrange page, each with its own discrete MIDI channel thus eliminating the need for wiring up a Multi Instrument object. Hooray!! Well not quite!
Despite this looking quite fancy in the Arrange area, behind the scenes in the Environment object numbers are starting to add up! For this to work Logic has to duplicate the '˜Channel Strip' in the environment for each discrete MIDI channel you want.
Now if you never go into the Environment that's fine. If you do you'll have to wade through reams of duplicate faders. Don't forget this also adds to Logics memory consumption too!
Below are some of the faders for '˜four' 16 channel software instruments (64 channel strips). 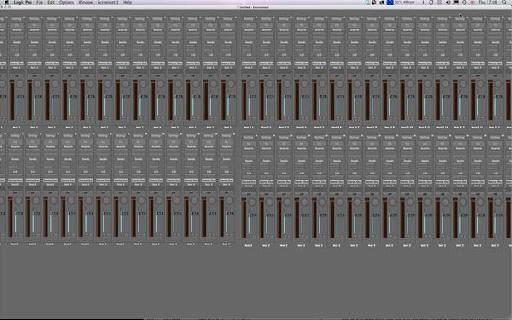 ï¿¼The weird thing is you don't actually gain any advantages over the '˜Multi Instrument' object technique as far as control goes. If you move the fader for one the other 15 duplicates move as well. You still can't use CC7 or CC10 (pan) as it will effect channel strip volume and pan on all 15 copies.
Saying that it is a big leap forward in convenience. But still not quite perfect!

Now one plugin in particular that is quite clever in the way it deals with multi-timbrality is Stylus RMX.
I came across this by accident when editing a MIDI file in Logic's Event List after I'd dragged the MIDI file from Stylus RMX into the Arrange area.
I noticed that if I dragged a MIDI file from say '˜Part 4' in Stylus that it actually bought the MIDI channel (Ch 4) information with it inside the region (MIDI file). 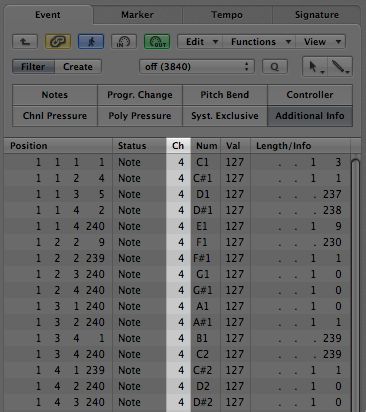 It dawned on me that as long as my Software Instrument track was set to channel '˜All' there was no need to create and wire up a '˜Multi Instrument' or create '˜Multi-timbral' tracks as the MIDI was automatically speaking to the right part in Stylus via the MIDI channel information in the region!
All I had to do was duplicate the track using Option-Command-S (or Track > New With Same Channel Strip/Instrument). Each new part I dragged from Stylus sent the information over its own discrete MIDI channel! This is now how I use Stylus.

So what if you want to trigger each discrete part from a MIDI keyboard? Well by default every MIDI controller transmits on MIDI Ch 1. There is however no reason why you can't change this! All controllers have the ability to change their MIDI Transmit (TX) channel.
If I want to access the sounds on say Part 4 of Stylus from a duplicated track I could just set my controller keyboard to Transmit on Ch 4 so it's on the right channel before it enters Logic. Simple!
In fact, I've found this to be an really quick way to program with Stylus. Triggering another '˜Part' is as simple as pressing a + or - key on my controller to switch the MIDI channel.
In the image below you can see 4 Parts of Stylus being triggered from one region. Have a look at the note information. In the '˜Ch' column you can see the notes are on different MIDI channels. 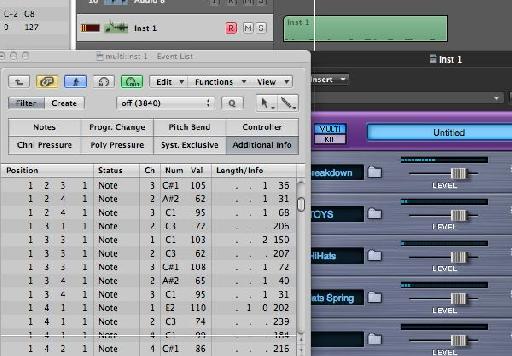 This also cuts my track count although I can easily separate these by selecting the region and going to MIDI > Separate MIDI Events > By Event Channel.
It even automatically duplicates the tracks for me too.

You could even go as far as to build a MIDI channel switcher using some Transformers (before the Sequencer Input in the Environment) hooked up to a hardware fader. Just move the fader to access any channel of a multi-timbral synth instantly.
Note: This might be a project for the more (ahem!).... adventurous Logic user!

Still a Way to Go!

For me there's still a way to go in Logic before multi-timbral and multi '˜output' synths are integrated in a harmonious way.
For instance if I want to have a multi-timbral soft synth with 16 MIDI channels and 16 stereo outputs (and automate those outputs) I need a whopping 32 tracks in the Arrange just for that one instrument!!
What I'd like to see is a setup where '˜Auxiliary' audio objects that were created from a Software Instrument (for multi output usage) were also able to be used as '˜sequencer tracks', each with their own unique MIDI channel.
Maybe in Logic 10? In the meantime check out SteveH's Logic TNT2 and Logic TNT3 series for specific tips on working with multi-timbral instruments and much, much more!
Related

Toby Pitman
For the past 20 years Toby has worked as a professional guitarist, programmer and producer. Clients include Sir Paul McCartney, George Michael, Shirley Bassey, Yusuf Islam, Giles Martin as well as the London 2012 Olympic Ceremonies. He has also worked extensively in TV, Advertising and Film. As well as composing himself he has also worked alongside many composers like David Arnold, Clint Mansell and Simon Franglen on many major film releases. An expert in synthesis and sound design Toby has also lectured for Apple on their Logic Pro music software which he has used since its days on the Atari. He has also worked as an educator for the International Guitar Foundation and the Brighton Institute of Modern Music teaching guitar. In his spare time (of which there is very little) he moonlights as a motion graphics artist specialising in Cinema 4D and After Effects.
Related Videos
Comments (5)