It’s been a number of years since Focusrite first took its significant experience of making top-flight studio outboard and applied it to smaller and more affordable recording interfaces. The company’s latest update to its Clarett line of audio/MIDI units comes in three sizes: 2, 4 and 8, with 10x4, 18x8 and 18x20 in and out respectively. Somewhat unusually, the revamp to this series has come about not based on a conventional roadmap, but due to a fire at the factory that made the previous units’ converters. This necessitated a move to new Cirrus converters, which offer greater performance. Hence the tweak to the name of the interfaces to Clarett+. 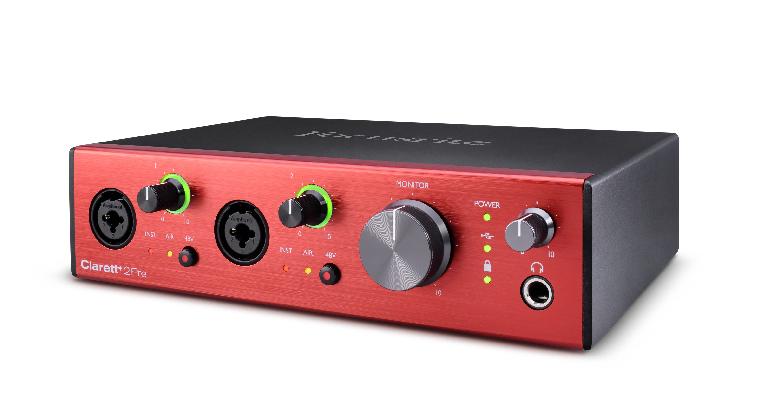 We reviewed the Clarett+ 2Pre, the most compact unit of the three and also the only one that can be bus powered over USB-C from a port that can supply at least 15W of power. This includes pretty much all Apple laptops from the last 5 years or so, and you also get a dedicated PSU in the box, as well as USB-C to USB-C and USB-A to USB-C cables for power and data. The build quality is as good as expected, solid yet relatively lightweight, with the attractive signature red metal fascia and rubber feet on the base to ensure it stays put on flat surfaces.

Starting round the back, you get a power switch and PSU input as well as USB-C port and a Kensington lock port for security. There’s 1x1 MIDI in and out, which is great to have especially on a smaller unit for incorporating MIDI hardware into your compact studio setup. Four 1/4 inch line outputs let you connect speakers or output to another console, and an optical input allows up to 8 channels of digital audio in at 48KHz over ADAT, handy for connecting other digital audio gear—Focusrite suggests its own OctoPre if you want to record more channels.

Moving to the front panel, the dials and controls have a reassuringly high quality feel and finish. Two combined jack / XLR inputs with switchable phantom power have their own gain controls with a clever “halo” light system to show input levels while using hardly any space. A large monitor knob controls the sound sent to the outputs, while the single headphone out is neutral in character and designed to provide a flat response with any connected cans.

Moving back to the inputs, you’ll see Instrument and Air lights. Rather than having physical buttons, these are set using the Focusrite Control app from your Mac or PC. The former simply tells the hardware whether it’s dealing with a line input or instrument input. The Air option, using Focusrite’s all-analog Air circuitry, is specially designed to give a lift to vocal recordings. It does this by emulating the classic Focusrite ISA110, switching the impedance to 2.2kΩ and adding two cumulative high shelves, for a total of 4 dB boost in the high frequencies. It’s definitely noticeable in everyday use, providing a subtle yet welcome shine to vocals as they are captured.

As noted earlier, the Clarett+ employs new converters. On the D-A side there’s a lower noise floor that helps to reveal more detail, and the A-D converters offer low distortion performance meaning that even instruments that need high gain for recording like quieter vocals or strings are recorded with more accuracy. At the other end of the scale, if you’re plugging in an electric guitar, the high-impedance JFET instrument inputs have a ton of bandwidth to capture all of your guitar tone. In fact there’s 118 dB of dynamic range on offer, which is impressive. 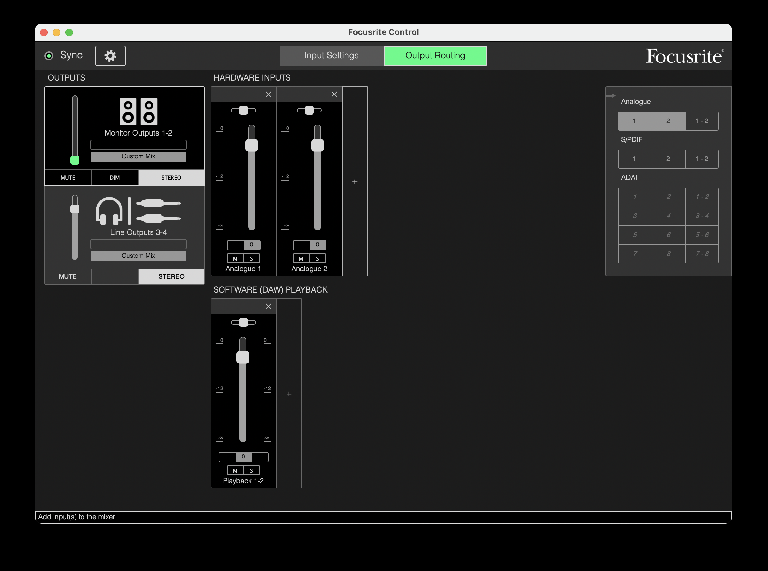 The Focusrite Control app provides an elegant way to manage routing and connections. From here, you can switch the unit’s sample rate, manage which of its line outs are active, and set its clock source. Switching to the Output Routing tab lets you easily control input levels, panning, mute and solo, and manage the software playback channel from your DAW. You can click any of the tiny ‘plus’ icons to add multiple input options, say from ADAT, and then manage how these are activated and routed. Monitor outputs can also be managed from here, with Mute and Dim options available. 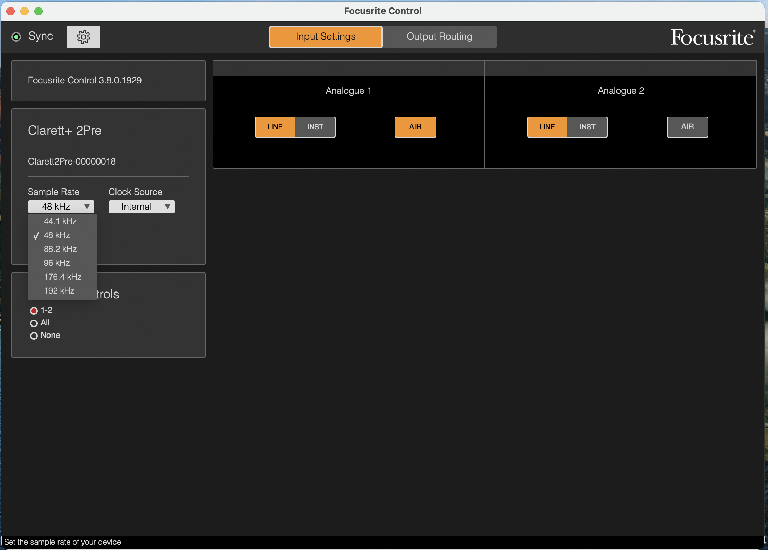 Given that it helps to keep the hardware more compact and uncluttered, having access to these routing and setup options in the app is a good design choice. You probably won’t be changing most of this stuff every time you record, but it’s easy enough to access when you do. The things you will need to set each time—namely levels—have physical controls on the box itself. 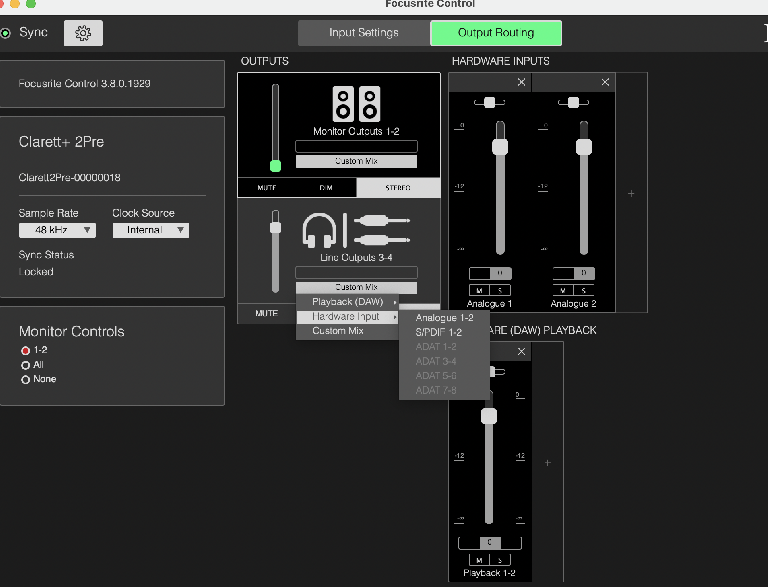 Focusrite throws in some extra goodies too which you’ll get access to once you register your hardware on their website. There’s the Focusrite Red 2 and Red 3 plug-ins which are an EQ and a compressor respectively and modeled on classic studio outboard units, and the Brainworx bx_console Focusrite SC that models EQ and dynamics modules from the Focusrite Studio Console. On top of that, you’ll get membership of the Plug-In Collective that offers regular free downloads and discounts.

The Clarett+ 2Pre is an excellent recording interface that punches above its weight in terms of size and performance. With a small footprint but a solid build, powering over USB-C makes it very portable, while still coming with a bundled PSU. Setting up recording is simple thanks to the Control app, which greatly expands the flexibility of the system, letting you manage inputs, outputs and routing quickly and easily.

The preamps and converters did their job impeccably, capturing everything we threw at them with confidence. Dialing in the Air feature for recording vocals made a subtle but noticeable difference, and monitoring levels and playback worked very well thanks both to the on-board system of lights and also the more detailed visual feedback available in the Control app.

Even with its 8 digital inputs, this model (though not necessarily its larger siblings) is likely to be used by those recording just a couple of things at once - typically through a mic or an instrument input such as a guitar. But that covers a huge range of musicians and producers, for some of whom space or budget may be an issue. Or even just those who work on the move, or make electronic music in the box but want high-quality monitoring and the odd recording. Being able to incorporate MIDI hardware with full-size DIN ports is a great bonus too. The Clarett+ 2Pre is a well-rounded package that will fit into a range of studio setups.

Cons: Cheaper options are available if your needs are modest, e.g. simple podcast recording. 8 channels of optical in is good, though it’s not clear how many owners of this model would be using other optical hardware.