All Articles Logic Pro
What's New in Logic Pro X 10.6: First-Look Videos
Rounik Sethi on Thu, November 12th 0 comments
There's more to the new release of Logic Pro 10.6 than you think from looking at the release notes. Steve H, Logic master trainer, unveils all you need to know in these FREE videos.

Alongside the huge announcements for the new OS Big Sur and the introduction of the M1 Silicon chip based MacBook Pro, MacBook Air and Mac mini, Apple have swiftly rolled out Logic Pro 10.6.

While not as big an update as the relatively recent 10.5 update, Logic Pro 10.6 adds features such as the ability to control the Step Sequencer using Logic Remote, Sampler Zone by Note, full support for all Novation Launchpads and more...

We have a FREE, video course ready to take you through all the new features: AskAudio Academy | macProVideo 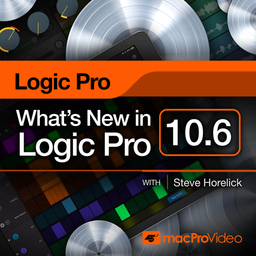 Dream It. Do It.
Do you want to learn What's New in Logic Pro 10.6?
Yes, I want to learn!
No Thanks, I just want to read the article.
Feedback
How are we doing?
We'd love your thoughts, feedback and questions regarding our new site. All feedback is appreciated!
We do not respond to this form! If you need support, please visit our support page.
Thank you for your input!
Your message has been successfully sent
Course Advisor
Don't Know Where To Start?
Ask A Course Advisor