All Articles Reason
Heavyweight Loop Mangling For Sound Design In Reason
Hollin Jones on Thu, October 15th 0 comments
Reason has many tools for sound design using loops from the built-in to ones you may not know about. Hollin Jones reveals its secrets…

Since its creation, Reason has had awesome sound design capabilities thanks to its built-in synths, samplers and loop players. One aspect that has perhaps been less widely touted is how you can manipulate loops to create rhythms and textures without getting into the complexity of programming synths. In fact, a number of Reason’s built-in tools can really help you out. Let’s look at some of these techniques.

Begin by importing a loop into an audio track. In this example it’s a fairly simple acoustic drum loop. It helps if your loop is already cut to the right length, with the start and end suiting the loop’s given tempo. Reason doesn’t stretch the loop to fit your project tempo on import but you can remedy this by making sure snapping is switched on and then dragging the loop to the nearest bar marker while holding the alt / option key.

Elongating the sample will slow it down and making it shorter speeds it up. Hit Play and your loop should be in time. By default, Reason stretches your audio with minimal artefacting and won’t introduce any distortion. By right clicking on any audio clip you can select a stretch algorithm - usually this is best left to “allround”. 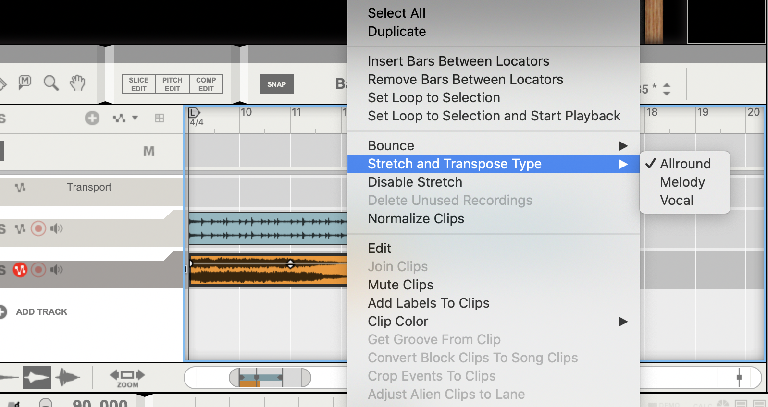 Sometimes though you may actively want to create a strange, slowed-down effect, so you can use the same tool to stretch a loop out much further. Try stretching the same loop over 50 bars or so. The results can be eye-opening. Rhythmic loops stop sounding like beats and start sounding like textures and soundscapes. Of course you can do the opposite and speed a loop up, making it very fast and perhaps repeating it to occupy space. Or, copy and paste the same loop multiple times and stretch each one to a different duration to create more variation.

Reason can auto-slice audio loops and this is particularly effective with any kind of rhythmic content. Access the slices by double clicking on a clip and then selecting Slice Edit mode. You can time stretch certain slices of a loop and not others, resulting in some pretty crazy variations. 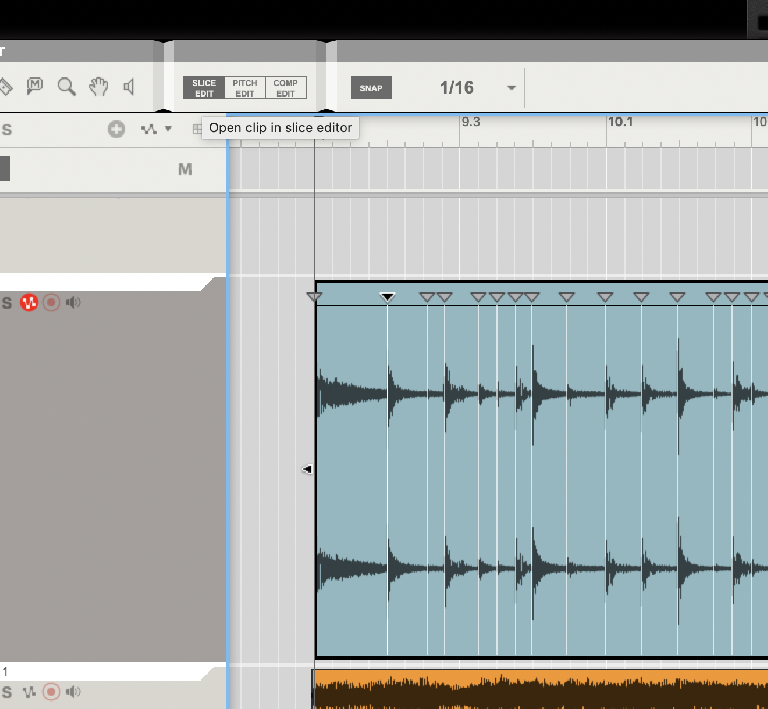 Obviously this can go wrong as well as right, but it’s fun to experiment! To render the edits you have made down to an audio track or indeed out to a new file, right click on the edited clip and choose to bounce the clips to new samples, recordings or to disk. 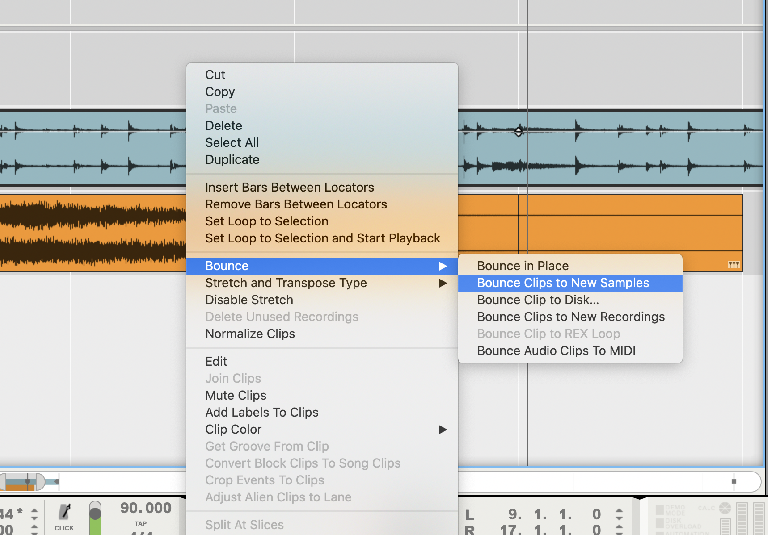 Rack Extensions are a great way to add some life and dynamics to loops, especially beats. Here we have added an instance of the Synchronous modulated multi effect to our drum track and chosen a preset patch called “Slice And Dice”. This particular preset has an immediate and distinctive effect on the drums, introducing time-based bursts of distortion, reverb, filtering and delay based on its three modulation curves. Obviously you can alter these, as well as tweaking each individual effect’s settings, but the presets for Synchronous are an excellent starting point and work equally well on other clips like guitars or vocals. 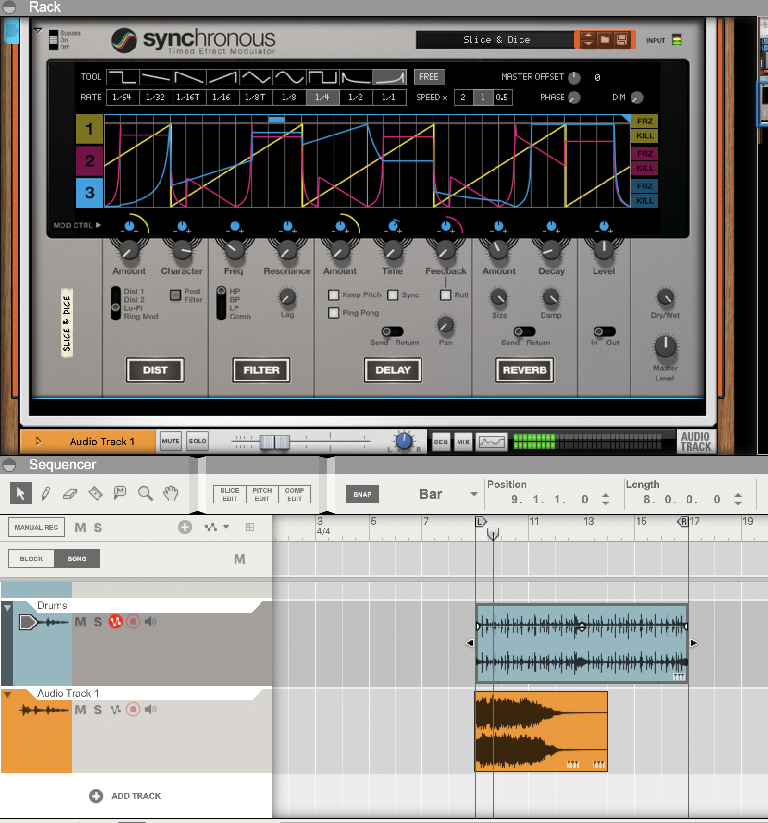 Other Reason rack FX can be just as useful, though for these more heavyweight sound mangling tricks you will probably be opting for the slightly more out-there models, and not just the odd EQ. The Pulveriser is another good one to use on beats. In this example we have dropped it onto our drum track and dialled in the “basic pulverisation” preset, making a few minor tweaks to the settings afterwards. This module is great for adding compression, punch and energy to beats but in a time-modulated way - if desired - thanks to its built-in LFO tools. 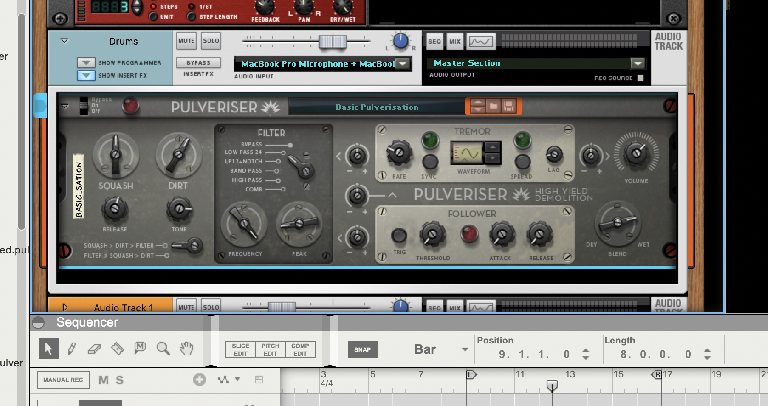 Another way to extract the maximum amount of creative potential from a loop is to have Reason convert its notes to MIDI and then use the resulting data to create one or more new parts. It works like this. Right click on your (sliced) audio loop and from the menu choose Bounce > Audio Clips To MIDI. Reason will then create a new MIDI track ready-populated with the data it was able to pull out, and by default will also link it to an instance of Subtractor, though of course you can swap this for any module you want. 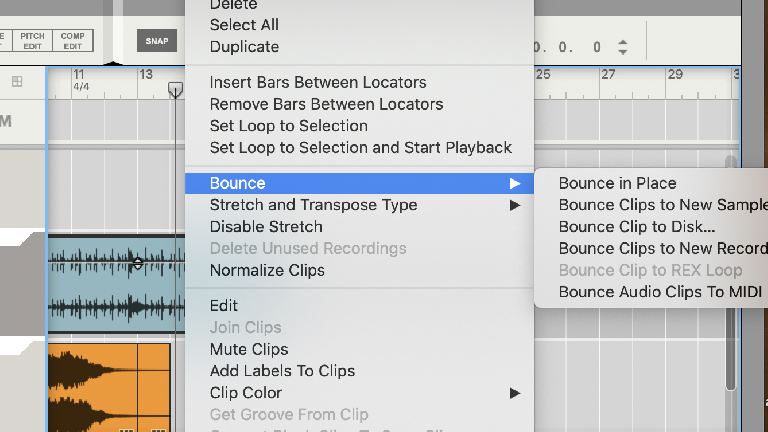 In this case since the audio loop was a drumbeat, Reason has extracted the various velocities and the rhythm but assigned the actual melodic data all to a single note. The result is a part that’s in time but lacks any melodic variation.

You can of course start to move the MIDI notes on the new track around by yourself, but why not try using one of Reason’s own MIDI processors to do it for you, and get some more advanced results? Here we have added one instance each of the Dual Arpeggio and the Scale And Chords modules from the Players library to the MIDI track containing the new MIDI notes. We dial in some settings until we start to get a result we like, and the modules interpret and change the MIDI notes in real time, adding harmonies. Finally for good measure we throw on an instance of The Echo to add some warmth and depth. Voila - an additional melodic and rhythmic part that syncs perfectly with your original loop, and you haven’t had to program or play any MIDI by hand. 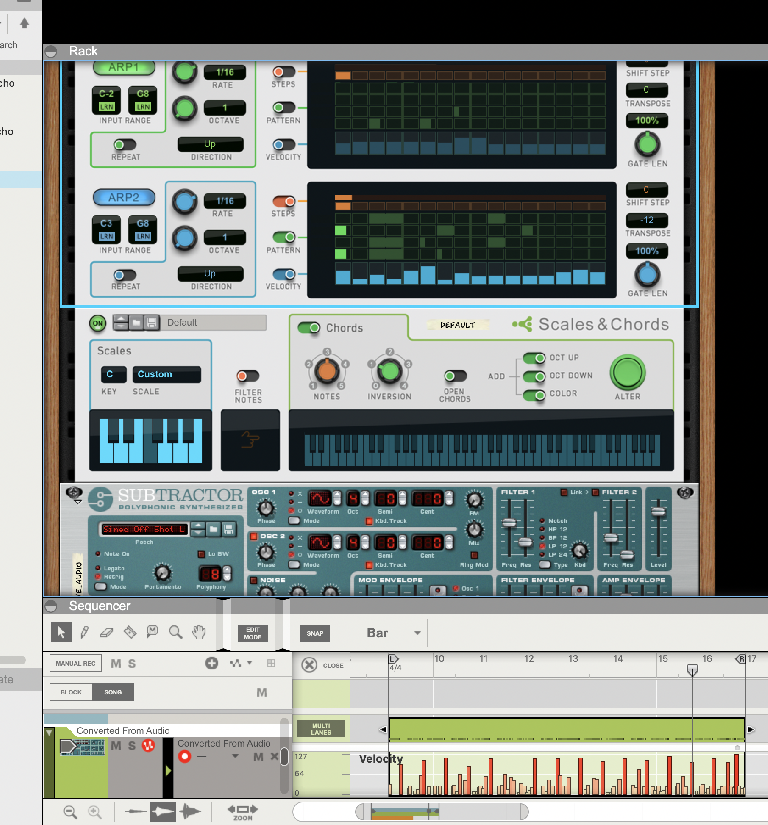 Since Reason now supports VST plug-ins, the scope of what you can achieve with FX processing is bigger than ever. Plus it has always had REX file playback capability of course, another way of quickly and easily modifying and manipulating loops, connecting up CV cables and routing inside Reason for even more far-out textures and sounds. The sky is the limit when it comes to audio and loop processing in Reason, so give it a try today and see where your imagination takes you.