All Articles Review
Review: Adobe Photoshop and Premiere Elements 12
Hollin Jones on Sun, November 24th 0 comments
Language
There's no doubt Adobe create industry standard solutions for many creative professionals. But how do their simplified Photoshop Elements & Premiere Elements versions fare for the rest of us?

You may be aware that Adobe's Photoshop has for many years been the industry standard digital image editor, and Premiere has also achieved a great reputation among digital video editors. The flagship versions have always been aimed at professionals, but for some time now Adobe has been making 'Elements' versions : less expensive but still surprisingly capable tools. With Adobe's recent controversial move to a cloud subscription-based model for the pro versions, the Elements have remained cloud-free. You can download them or get a boxed copy and you have to sign in to authorize them but once you have bought them, that's it. As such, they may now be even more attractive a proposition for those not keen on paying on an ongoing basis for access to the software.

Photoshop Elements 12 costs Â£78 / $99 and occupies around 3 GB of space on your Mac or PC. The system requirements (http://www.adobe.com/uk/products/photoshop-elements/tech-specs.html) are somewhat higher on the Mac than the PC side but in either case a recent machine should work well. The software does an awful lot, and you'll find an exhaustive list of its features on the product website, but we're going to look at what's new as well as how it stacks up to the competition. 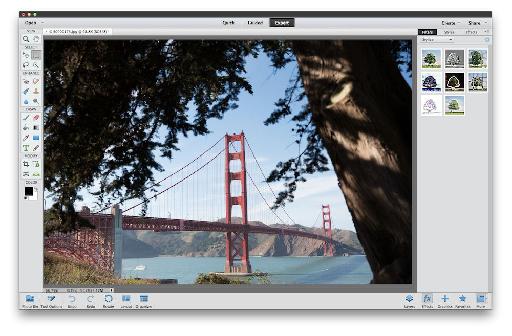 The interface is platform-neutral and stripped down, but easier to get to grips with than the pro versions.

Adobe's apps have a unified look across platforms which means that they aren't particularly Mac-like, opting instead for a neutral and slightly pared-down look. Icons and buttons are big and blocky and there are three main modes : Quick, Guided and Expert. Quick provides simple editing tools, frames and other instant effects. Guided has a more specific set of presets for retouching images, adding effects like depth of field and creating montages using puzzle cutout effects and the like. Expert is the mode that Photoshop users will recognise more easily, with a tool pallete running down the left hand edge, the ability to use layers and floating info windows. 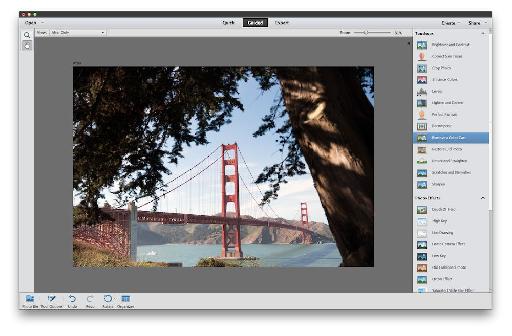 Use Guided mode to access common tweaks and effects quickly.

There are many of the tools you'd expect to find including image transform and enhance, layer styles and filters as well as a 'before and after' view so you can keep track of your edits. Some of the more advanced tools include things like Smart Move, for intelligently relocating people inside an image, panorama creation, photomerge group shot and content-aware fill and straighten. You can use templates to create things like photo books, calendars and CD covers, and there's even a batch image processor, which can come in really handy. There's great online sharing support for all major photo and video hosting services and the Organizer app lets you tag and manage pictures based on date, location, face detection and other criteria. 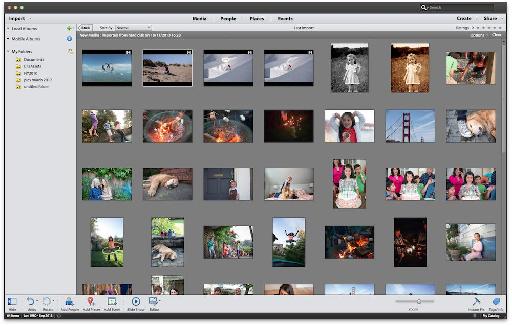 The Organizer app acts as a central repository for all media for the Elements apps.

Photoshop Elements 12 costs more than iPhoto (which is essentially free) but it's a much more fully-featured image editing application. In fact you can feel that the heart of Photoshop CS is here, but using a different skin. The simpler modes are easy enough for even non-technical people to get to grips with, and it's a friendly and approachable app. For more advanced users there's still much to like, and you could definitely use it for real work, even if the big chunky interface could seem to suggest otherwise.

Premiere Elements follows a near-identical approach to Photoshop in that it costs essentially the same and uses a similar, stripped-back interface.  Like Photoshop it also lets you use Revel, Adobe's online media storage tool. The idea is that you can upload media from your portable devices like iPhones and iPads and pull it down to your Mac or PC to work on it. Similarly you can create albums and movies designed to work on those devices and upload them to Revel. It's a bit like Photo Stream, except it works with video too. Since so many people shoot on iOS devices now this is pretty handy. 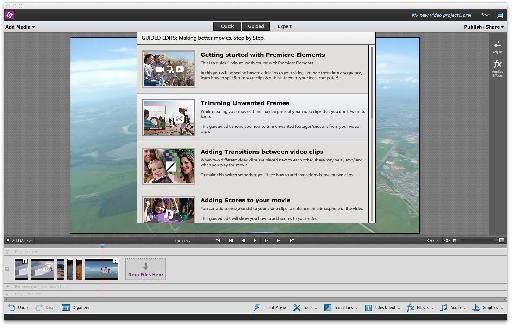 Again, Quick mode lets you stitch together footage quickly and easily with a minimum of fuss. Guided mode has more interactive qualities here, with animated step by step guides that show you how to do things like trimming, adding transitions, titling, narrating and creating motion graphics. These are invaluable for less experienced users and on the whole Premiere handles things very well. It's not likely to start blinding you with science.

Expert mode is again more familiar to experienced users, with a more conventional multi-layered timeline letting you arrange and edit video and audio clips. Right clicking on media in the timeline provides quick access to important tools and you can import media simply from the Organizer app, from a webcam or any other connected digital device. There are some new effects available so you can make your clips look like old film, like cartoon graphics and generally mess about with the speed, colour and overall appearance of footage. You get 50 musical scores supplied, and Premiere is smart enough to be able to trim these to fit your project. It's a nice touch and can lend a more personalized feel to a movie. 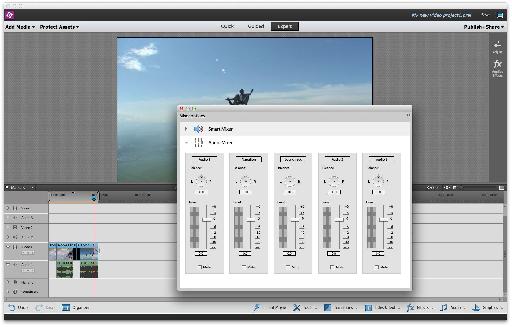 There are some more advanced tools on offer here such as a separate audio mixer for dealing with music and voiceover.

There's animated titling of course as well as clever stuff like subject tracking so you can make graphics follow people on screen, and optional automation of footage correction to get rid of things like camera shake. These aren't flawless but they do a decent job of compensating for poorly lit or shot footage. When it comes time to export your project you can choose from presets for a private web album, social websites, burning to disc or playback on a computer or mobile devices. Within each is a range of options for quality and size, so you will be able to target your files effectively. 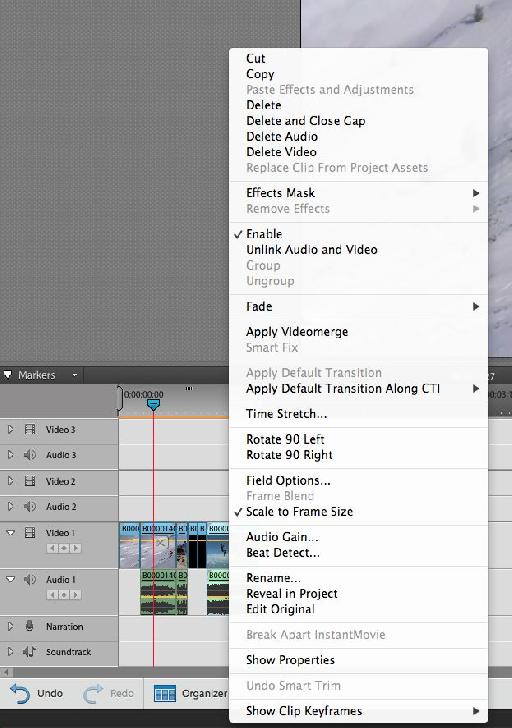 Premiere Elements 12 aims to take the mystery out of working with digital video and it generally does that well. It supports most any footage you can throw at it and makes it easy to add things like film looks, animation, voicover and music, and export the whole thing to the destination medium of your choice. As with Photoshop you can use it in a basic way or a more advanced way, when you will see many of the tools from the full version of Premiere appear. It's really not much like iMovie or Final Cut Pro : for one thing it has a more conventional approach to editing in a linear fashion, and it simplifies the use of effects and animation. Premiere Elements is a great introduction to the world of video editing and used correctly can help you get really good results without having to necessarily be an expert in the field. It hides the complex stuff away for the most part, letting you focus on being creative.

Dream It. Do It.
Do you want to learn 60 Tips Every Photoshop User Should Know ?
Yes, I want to learn!
No Thanks, I just want to read the article.
Feedback
How are we doing?
We'd love your thoughts, feedback and questions regarding our new site. All feedback is appreciated!
We do not respond to this form! If you need support, please visit our support page.
Thank you for your input!
Your message has been successfully sent
Course Advisor
Don't Know Where To Start?
Ask A Course Advisor