Live 9 106
Go Live With Live 9
Genre: Audio
There's a reason why Ableton calls it "Live". Dive into this course and get all the inspiration you need to go live with Live 9...

Bill Burgess
Bill Burgess is the former Pro Audio Product Marketing Manager and Logic Pro Artist Relations Manager for Apple Inc. He's also a brilliant software educator with long experience teaching audio producers how to make music!
Watch Free Previews!
View up to 5 free videos from ANY course each day.
Out of free previews? Come back tomorrow to watch some more!
Get A Library Pass!
Watch this course – and ALL Ask.Video courses – for as long as your pass is active.
Purchase just this course! Watch it anytime, for life.
To download & view offline, use our
NonLinear Educating Player Software.
Overview
Status: Available | Released: Mar 5th, 2013
Bill Burgess –one of our most popular Ableton trainers– is back with a deep look at what makes Live 9 both a performer's instrument and creative production tool. And, in the process, you get a deep look at how Bill, in his wonderfully casual style, concocts his unusual musical worlds.

This course starts off with a deep look at Warping. You learn Bill's warped techniques that he's put into practice as a live performance maniac. Next up is audio and control surfaces. Here you get some basic tutorials on audio and how to optimize your audio interface. Then you learn how to set up the all important cue mix.. an essential piece of the live performance puzzle. From there you're into controllerland where you learn about control surfaces, the crossfader and how to structure your levels.

The following section is all about using effects (FX). Here, Bill dives deep into the different EQs and filters. You also learn all about live performance Racks, Macros and Side Chaining. There so much more to this course, but why spoil it? Dive in see how Bill goes live-wild with Ableton Live 9!

Be sure to check out our ever-expanding Live 9 and Push courses... coming
Outline
Section 1: Section 1: Why Live is Different
Section 2: Section 2: Prepare to Warp - How Live Treats Audio
Section 3: Section 3: Optimizing Audio & Using a Control Surface
Section 4: Section 4: Using Effects
Section 5: Section 5: Taking Control
Other courses in this series
What to do next
Embed Video
Embed this video in a blog, forum post, or webpage. 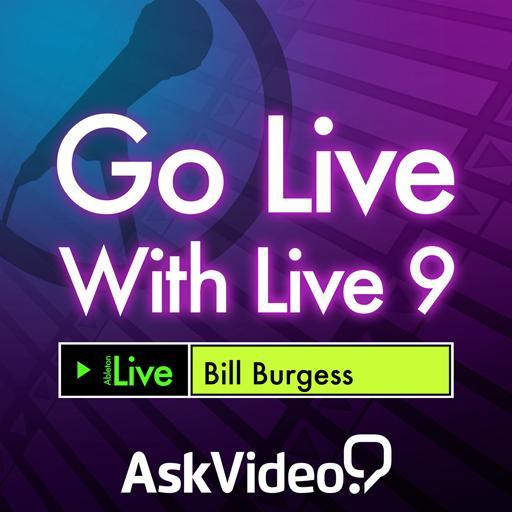