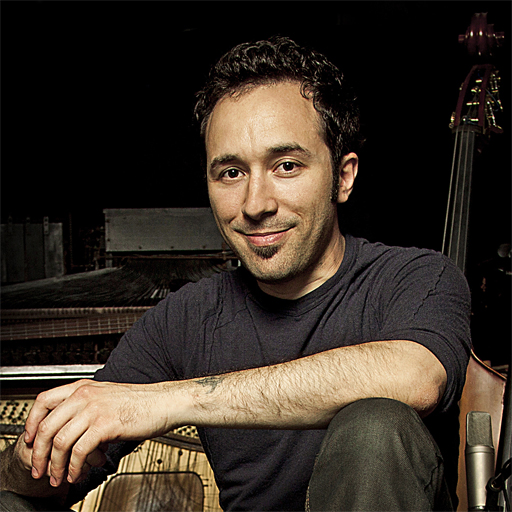 Diego is a world renown composer, music sound designer and performer. He creates eclectic compositions using custom-built instruments, common objects, elements of nature and experimental recording techniques.
Diego Stocco
Born in Rovigo, Italy in 1976. Diego discovered music at the age of 6 when his parents –hoping to calm him down– gave him his first electronic keyboard. That plan seems to have backfired as he has gone on to become a very active, prolific and influential sound designer in music and film.

Diego is one of the principal creative sound designers for the multi Award winning Spectrasonics virtual instruments AtmosphereTM, StylusTM RMX, Omnisphere® and Omnisphere® 2. And, his sound design has been featured on the scores of dozens of feature films, video games, tv shows, records and live shows.

He composed the original score for the feature film “Chernobyl Diaries” and is a featured soloist on several other features films and video games such as “Sherlock Holmes”, “Assassin’s Creed Brotherhood” and Assassin’s Creed Revelations. He has also worked as a music sound designer on numerous projects, including the films “Immortals”, “Takers”, “Into the Blue”, “Crank”, tv shows “The Tudors” and “Moonlight”. Diego also created the score for the video game “The Conduit”.

Diego publishes an advanced series of educational contents called “Feed Forward Sounds” and lectures at the prestigious Berklee College of Music in Boston and FIDM in Los Angeles, sharing his unique approach and techniques with their students.

We are thrilled to bring Diego Stocco and his captivating sound design videos to our members… we know that you’ll be inspired!

Twitter: @diegostocco
Website: www.diegostocco.com
Courses by Diego Stocco
Reviews
Feedback
How are we doing?
We'd love your thoughts, feedback and questions regarding our new site. All feedback is appreciated!
We do not respond to this form! If you need support, please visit our support page.
Thank you for your input!
Your message has been successfully sent
Course Advisor
Don't Know Where To Start?
Ask A Course Advisor