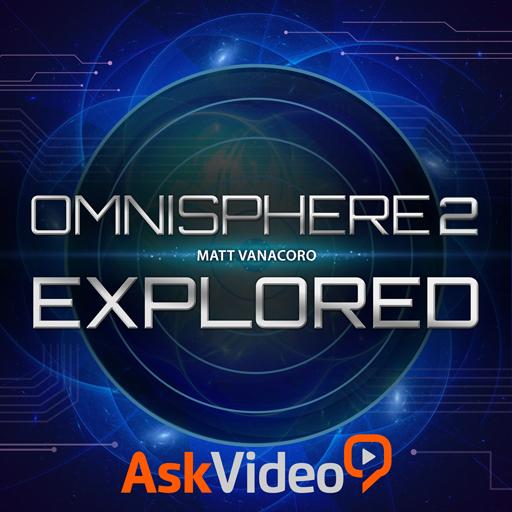 Matt Vanacoro
Matt Vanacoro is an A-List New York City based performer, composer and educator with deep experience in all aspects of production, synthesis, electronic keyboards and music technology...
Watch Free Previews!
View up to 5 free videos from ANY course each day.
Out of free previews? Come back tomorrow to watch some more!
Get A Library Pass!
Watch this course – and ALL Ask.Video courses – for as long as your pass is active.
Purchase just this course! Watch it anytime, for life.
To download & view offline, use our
NonLinear Educating Player Software.
Overview
Status: Available | Released: Jun 24th, 2015
When Spectrasonics releases a new instrument, the whole world listens… especially when that instrument is a new version of their award-winning, industry-leading synth: Omnisphere! This course takes you through all of O2’s main features and gets you very familiar and comfortable with this incredibly deep and powerful synth.

Trainer Matt Vanacoro explains everything from Omnisphere 2’s installation to its vast collection of sound generation engines, processors and controls. There are so many levels to this omnipotent synth that it’s important to understand all the features and how they work together. That’s exactly what this course is designed to do!

So dive into Omnisphere 2. Learn how to harness its power. Master its massive library. Familiarize yourself with its controls and then, take it for a sonic joy ride... and please remember to hold on tight!
Outline
Section 1: Section 1: Setting Up
Section 2: Section 2: Playing Sounds
Section 3: Section 3: Sound Sources
Section 4: Section 4: The FX Engine
Section 5: Section 5: Designing Complex Sounds
Other courses in this series
What to do next
Embed Video
Embed this video in a blog, forum post, or webpage.