Synthesis 201
Analog Synthesis in a Digital World
Genre: Audio
Learn how Analog synths fit into your modern music production workflow in this amazing tutorial for ALL audio producers.
Skills: 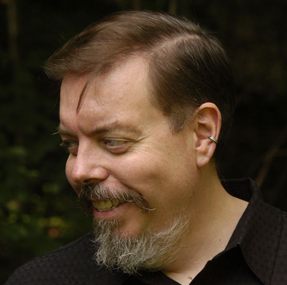 Richard Lainhart
Richard Lainhart is an award-winning composer, filmmaker, and author - a digital artisan who works with sonic, visual, and textual data.
Watch Free Previews!
View up to 5 free videos from ANY course each day.
Out of free previews? Come back tomorrow to watch some more!
Get A Library Pass!
Watch this course – and ALL Ask.Video courses – for as long as your pass is active.
Purchase just this course! Watch it anytime, for life.
To download & view offline, use our
NonLinear Educating Player Software.
Overview
Status: Available | Released: Dec 22nd, 2009
In a world before computers and virtual instruments and long before MIDI, electronic music was made with analog modular synthesizers, with real 3-dimensional knobs, faders, and switches. Sounds were constructed by routing electricity from module to module with patch cords and turning potentiometers to sculpt sound and music real time. This was an awesomely creative period in the history of music. Composers/performers, like Morton Subotnick and The Electronic Art Ensemble, stood before their vast arrays of analog synths and towering sound systems performing otherworldly atmospheres of sound that to this this day are unmatched in their expression and primal audio pyrotechnics. These amazing synths were not controlled with your typical B&W keyboards that permeate today's bleak controller landscape. Rather, they were triggered by "Touch Activated Voltage Sources" and "Multiple Arbitrary Function Generators". It was an exciting time. But all things must pass...

The next wave in electronic music history was the era of presets and MIDI and suddenly everyone stopped turning knobs! Instead of making connections we started making selections and the fundamentals of synthesis and signal flow became a lost art.

Now analog synths are back and these new instruments are excellent tools to teach the art and science of synthesis. We at MPV are proud to bring back synthesizer wizard and performer , Richard Lainhart, to show us just how these modular synths work. In his tutorial, Analog Synthesis in a Digital World, Richard demonstrates his Buchla Series 200e and takes us on a educational excursion to through the world of basic synthesis explaining the fundamentals of waveforms, signal flow, additive and subtractive techniques and how they apply to today's software synthesizers. So get out your virtual patch chords and plug in to "Analog Synthesis in a Digital World.
Outline
Section 1: Section 1: An Introduction to Analog Synthesis
Section 2: Section 2: Analog Synthesizer Modules
Section 3: Section 3: Controlling and Analog Modular Synthesizer
Section 4: Section 4: Moog Modular V Waveforms
Section 5: Section 5: Envelops and VCAs
Section 6: Section 6: Using Voltage Control Filters
Section 7: Section 7: Filters in ES1
Section 8: Section 8: FM Synthesis in ES2
Other courses in this series
What to do next
Embed Video
Embed this video in a blog, forum post, or webpage.