Logic 210
Vocoding With EVOC
Genre: Audio
Logic's EVOC 20 PolySynth is one of the coolest Software Instruments in Logic's EV series of vintage synths. Let David Earl (a.k.a. SFLogicNinja) show you how he uses it and why you need to master this awesome, sonically rich plugin...

David Earl
David Earl is a composer/producer and Logic Studio guru living in the San Francisco Bay Area. You've seen him on YouTube, now watch his work at macProVideo.com!
Watch Free Previews!
View up to 5 free videos from ANY course each day.
Out of free previews? Come back tomorrow to watch some more!
Get A Library Pass!
Watch this course – and ALL Ask.Video courses – for as long as your pass is active.
Purchase just this course! Watch it anytime, for life.
To download & view offline, use our
NonLinear Educating Player Software.
Overview
Status: Available | Released: Sep 8th, 2011
Do you want your vocals to sound like a chorus of modulated Moog oscillators? How about getting your drums to play rhythmic chords? Are you totally into robotic-sounding alien pads? If you answered "yes" (or even "maybe") to any of the above, then you need to get Vocoding!

The EVOC 20 PolySynth, can be intimidating when you first plug it in! However, once you dig beneath its perplexing, techno faceplate you'll find an underground sonic universe waiting to be mined!

So what are Vocoders?

Let David Earl –our star MPV super-trainer– enlighten you! He starts this journey with a field trip into the history of Vocoding. You'll learn why vocoders were invented, how they were initially deployed and the fantastic physics behind how they make inanimate objects sound like they're singing!

But get this: Did you know that the EVOC is a full-blown standalone synth,? Well, it is and in the next section the amazing Mr. Earl explains its different synthesis engines and how to program them. You'll learn all about the EVOC's extensive library of built-in wave tables, its overtone rich FM synthesis engine, and the sweepable lowpass filter and filtered noise generator.

Now it's time to Vocode! David explains the EVOC's deep "center section" with all its programable formant bands, U/V detection (no sunglasses needed) and ultra cool modulators. This is where all the Vocoding magic happens and soon you, too, be mastering all the EVOC's controls.

So join David Earl and learn how the EVOC 20 PolySynth can be instrumental in making synth tracks sing, creating robotic voices and just doing some really weird and crazy-cool sonic effects!


Check out the world's best selection of Logic tutorials below. Buy a bundle and save up to 50% off the list price!

Outline
Section 1: Section 1: The Synth
Section 2: Section 2: The Vocoder
Section 3: Section 3: Going Deeper
Other courses in this series
What to do next
Embed Video
Embed this video in a blog, forum post, or webpage. 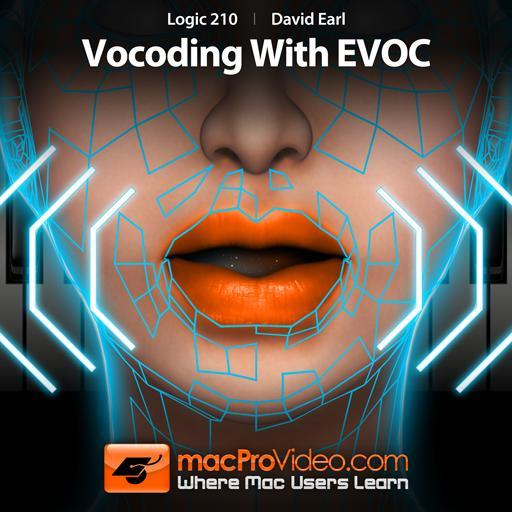