Steve Horelick
Twice Emmy-nominated Steve H is a Logic Pro Master and industry-leading audio producer/performer. You might know him from TV's "Reading Rainbow" ... he scored every episode of that program.
Watch Free Previews!
View up to 5 free videos from ANY course each day.
Out of free previews? Come back tomorrow to watch some more!
Get A Library Pass!
Watch this course – and ALL Ask.Video courses – for as long as your pass is active.
Purchase just this course! Watch it anytime, for life.
To download & view offline, use our
NonLinear Educating Player Software.
Overview
Status: Available | Released: Jul 16th, 2013
Screen real estate is valuable, especially when you're working with lots of plugins or mixing on a laptop! Enter Logic Remote, the FREE app designed by Apple to work exclusively with Logic Pro X.

In this course, you learn everything from setup to mixing and even some performance techniques, to unleash the power of Logic Pro X and control it directly from your iPad.

This app is amazing. When you're mixing, Logic's mixer appears on the iPad's multi-touch screen. Working on a cool synth track? Simultaneously tweak that track's Smart Controls right in Logic Remote – switch tracks, and Logic Remote follows right along. Even play awesome leads using Logic Remote's scale constrained, custom keyboards. Need to look up something quick in the manual? Point to it with your mouse and read all about it on the Logic Remote Smart Help screen.

So download the free Logic Remote from the App Store and then watch this course to learn how this amazing app will become an essential part of your Logic workflow!
Outline
Section 1: Section 1: Introducing Logic Remote
Section 2: Section 2: The Control Bar
Section 3: Section 3: The Keyboards
Section 4: Section 4: Chords and Chord Strips
Section 5: Section 5: Drums Pads and Kits
Section 6: Section 6: Performing
Section 7: Section 7: The Mixer
Section 8: Section 8: Key Commands
Section 9: Section 9: Conclusion
Other courses in this series
What to do next
Embed Video
Embed this video in a blog, forum post, or webpage. 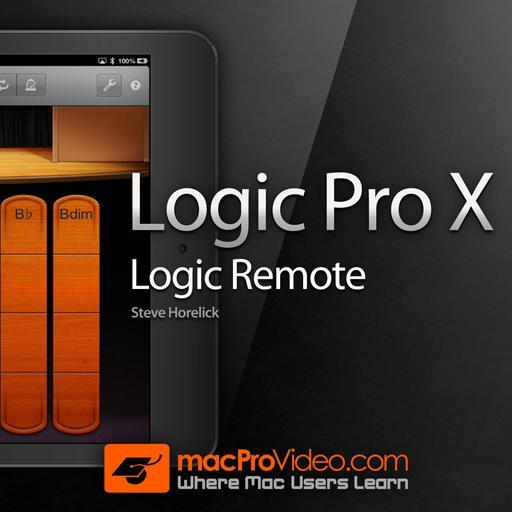