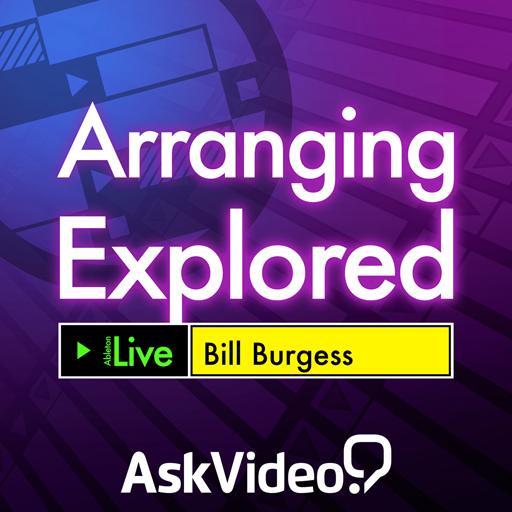 Live 9 105
Arranging Explored
Genre: Audio
This course could be called: "Get All The Deepest Super-cool Ableton Live Arranging Tips Ever Assembled!" Seriously, this course – by Bill Burgess – will rock your Ableton Live 9 world!

Bill Burgess
Bill Burgess is the former Pro Audio Product Marketing Manager and Logic Pro Artist Relations Manager for Apple Inc. He's also a brilliant software educator with long experience teaching audio producers how to make music!
Watch Free Previews!
View up to 5 free videos from ANY course each day.
Out of free previews? Come back tomorrow to watch some more!
Get A Library Pass!
Watch this course – and ALL Ask.Video courses – for as long as your pass is active.
Purchase just this course! Watch it anytime, for life.
To download & view offline, use our
NonLinear Educating Player Software.
Overview
Status: Available | Released: Oct 17th, 2013
Bill Burgess’ Ableton Live knowledge is deep. His creative approach to music and arranging reminds us that with a little effort, we can expand our knowledge-base and apply more and more unconventional arranging techniques to our own music making. In this course, he shares his visionary techniques to inspire us to dig even deeper into our Ableton Live compositional toolboxes.

In his humorous and offbeat manner, Bill takes us on a journey through Live’s standard and more
innovative arranging techniques. This awesome journey sparks our creativity and encourages us to explore our sonic imaginations. By watching this course, you get the chance to see how a master arranger/producer deploys the power of Ableton Live. As a result, this will help propel your music making craft to new and revolutionary heights!

So sit back and get ready to accelerate your arranging skills with Bill Burgess and Ableton Live.
Outline
Section 1: Section 1: Understanding The Arrangement View
Section 2: Section 2: Editing The Arrangement
Section 3: Section 3: Creating Movement With Automation, Risers & Transitio
Section 4: Section 4: Building Mixes with Depth
Section 5: Section 5: Outputting High Quality Mixes
Other courses in this series
What to do next
Embed Video
Embed this video in a blog, forum post, or webpage.